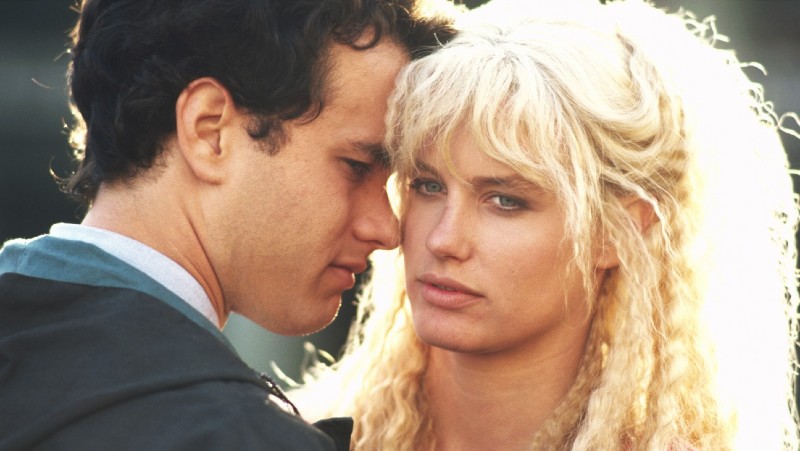 When Allen (Tom Hanks), a lonely and disillusioned man, is dumped by his girlfriend, he begins to question his ability to love someone else. He runs a produce business with his flashy, free-spirited brother Frank (John Candy), but he feels unfulfilled. After a night of drinking at a wedding, Allen makes the impulsive decision to take a cab from New York City to Cape Cod. On the boat to the island, Allen falls overboard and nearly drowns, but is quickly saved by a beautiful mermaid (Daryl Hannah) who pulls him ashore. With only a kiss, she disappears back into the water, finds Allen’s wallet at the bottom of the ocean, and swims to New York City to find him.

Allen, of course, is unaware that his mysterious new lady love, soon to name herself Madison after the avenue, comes from the sea, but her beauty and innocence of the world around her quickly steals his heart. Unfortunately, she will need to return “home” in six days… that is unless a crazed scientist, desperate to prove the existence of mermaids, exposes her secret first.

Splash is a whimsical fish out of water tale – quite literally. With such an outlandish premise, this movie certainly required a strong script and impressive directing to keep it from becoming more than a hokey sitcom. Splash achieved both, and more. At the heart of the story is Allen and Madison’s blossoming relationship, although it bucks rom-com convention by having the two leads give into their, er, more carnal nature shortly after meeting for the second… third?… time. It’s a welcome change to a genre that frequently follows the tried and true – and oftentimes boring – formula.

It’s not unusual in this genre for two characters to fall in love in such a short amount of time. The trick is to make the audience believe in that love, and I think this is where Splash succeeds. Madison comes from another world, one without things like ice and sarcasm. Her naivety could have made her seem so childlike that Allen’s interest in her would have felt extremely uncomfortable, but Madison quickly adapts to the world around her, giving her a more adult demeanor while still maintaining her virtuous outlook on life, and how things should be.

The highlight of the movie is definitely John Candy. Whereas Hanks is the straight man in the film, Candy brings an incredible amount of comedic energy to the sex-crazed Frank while never making him overly skeezy and unlikable. I was pleasantly surprised to see Eugene Levy too, as the scientist searching for Madison to prove his belief that mermaids exist. The entire cast provides something unique to the story and it’s refreshing that Splash doesn’t depend solely on physical gags and hijinks.

To be honest, I wasn’t thrilled with the film’s final act involving scientific experimentation and a drawn-out chase scene involving the army through New York City. I understand the need to up the stakes for both Allen and Madison, but it still seemed out of place considering the tone of the rest of the movie. I would have preferred to keep the conflict revolving around Levy’s crazed scientist if only to keep some of the mystery surrounding such a mythical creature. With the entirety of New York City suddenly realizing the existence of Madison, Splash loses a bit of its charm.

While Splash feels a tad bit outdated, and perhaps a bit too long at times, I still think it’s one of director Ron Howard’s better movies. It’s also a romantic comedy that brings both the romance and the comedy at a high level, setting it apart from the more basic movies in the genre. If you’re looking for something light and fluffy to watch while you’re practicing social distancing, definitely give Splash a watch. What better way to escape these uncertain times than to take a deep dive into the ocean with a sweet and captivating underwater love story.