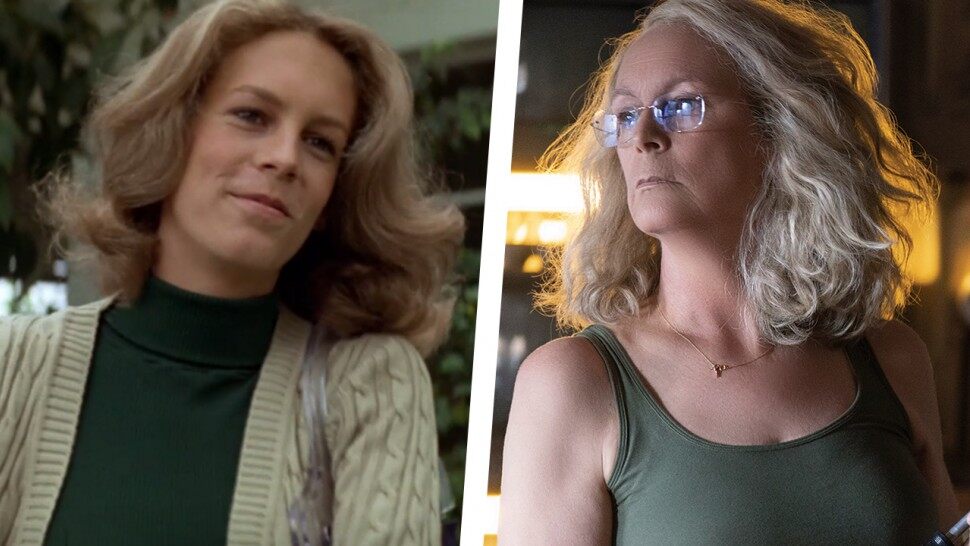 [Note: There are so many spoilers in this article that your appetite for Halloween 1978 & 2018 (and all those in between) will be ruined if you’ve not already seen them. Digest all this with care.]

Halloween (2018) burst onto the horror scene last year like a party crasher at a costume ball. Fans of the franchise hailed it as a return to the source and those who knew better called the film out for recycling wasted ideas. Which side was right? Who cares! What is important is that the movie was a Halloween bucket filled with more than its fair share of eggs … Easter eggs.

Fortunately, as easy as it is to separate the chocolate bars from Liquorice Allsorts, it’s just as easy to distinguish between the tricks and the treats in Halloween 2018. By tricks I’m referring to the tricks of the light playing across the mirror that is Halloween 2018. Because just as a mirror reverses an image in its reflection, so, too, does the latest Halloween show the flip side of the original.

But don’t take my word for it, Dr. Sartain himself talks about the symbiotic nature of the relationship between the protagonist and the antagonist when he says, “Michael’s pursuit of Laurie Strode could be what keeps him alive. I would suspect the notion of being a predator or the fear of becoming prey keeps both of them alive.” Fortunately, the film itself says this much better than he does.

The movie’s setting is a case in point. Halloween 2018 opens as a team of International True Crime Podcasters (no, really) come to visit Michael in the Haddonfield asylum before he’s transferred to a sanatorium in Smith’s Grove. Sound familiar? It should because (after the prologue in which little Mikey Myers’ sister gets the point) the original Halloween opened as adult patient Michael Myers was being transferred the opposite way, from Smith’s Grove to Haddonfield.

(For those of you collecting those Easter eggs, the name Haddonfield originates with Debra Hill, co-writer and producer of many Halloween films, who hailed from Haddonfield, New Jersey. Smith’s Grove is a town near Bowling Green University in Kentucky, where John Carpenter attended school.)

The next example of this contrast between the two films takes place in the classroom. Laurie Strode (Jamie Lee Curtis) was a high school student on October 31, 1978, as is her granddaughter Allyson (Andi Matichak) in 2018 (apparently being a final girl runs in their family–let’s hope it runs fast enough). Not only that, they have the exact same class (literature) and sit in the exact same seats. 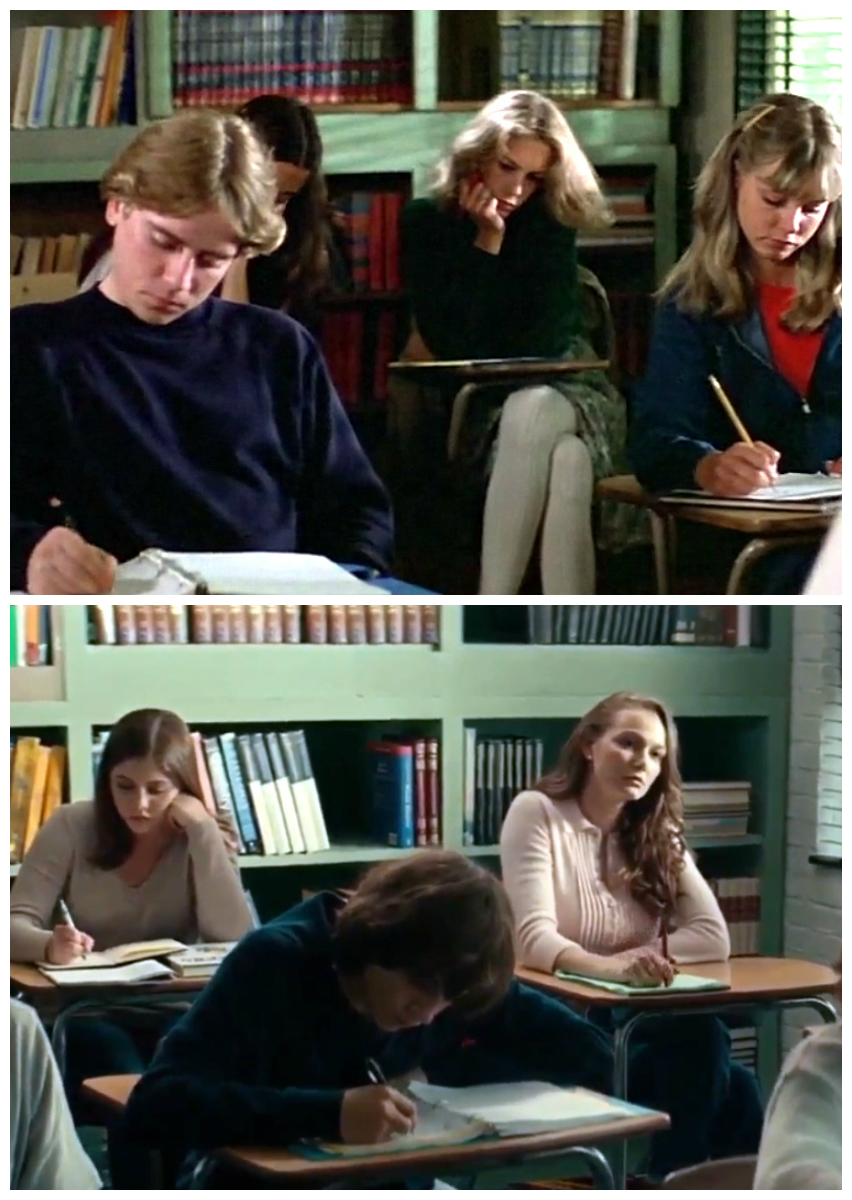 What sets the two young women apart, however, is the subject of their lessons. Laurie learned about a (certainly fictional) writer called Samuels, whose character was “destined to his own fate, no matter what action he took.” This pessimistic message is in stark contrast to Allyson’s, whose course focuses on the work of real writer Viktor Frankl. According to the teacher (the voice of actress PJ Soles, who played Laurie’s best friend Lynda in the first Halloween), Frankl says “‘Fate took a different course. I understand how someone who has nothing left in this world may still know bliss.’” Fate wasn’t the only thing that took a different course from the first Halloween. As Allyson’s teacher herself says, “His message is totally hopeful.”

At that moment, both young ladies gaze through their respective classroom windows, and what they see represents the two sides of the stalker coin to which Dr. Sartain made allusion. When young Laurie looked out, she saw Michael Myers, but when Allyson looks out of the same window, she sees…Laurie. 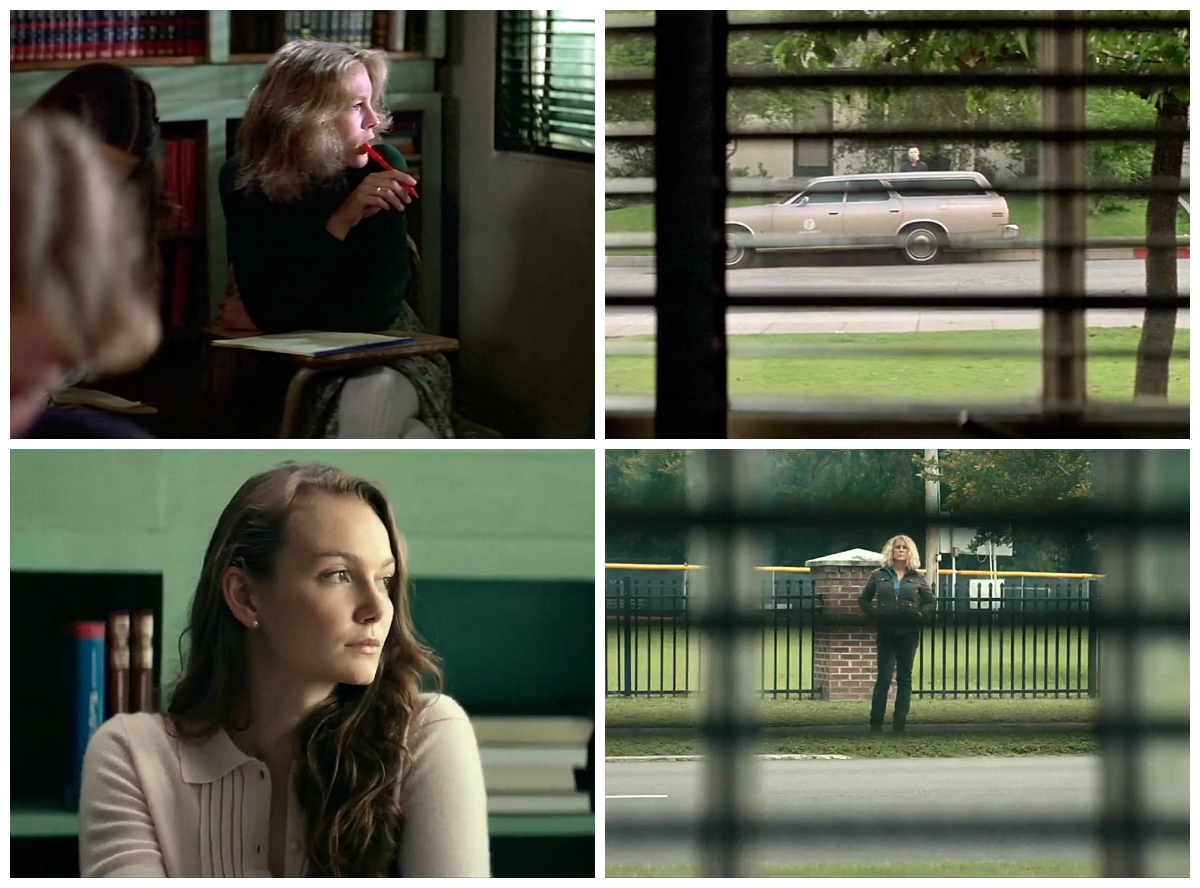 The school is not the only place Laurie and Michael switch places. The build-up to the climax offers a couple reverses, as well. The famous scene in which Michael falls from the top floor is the same but with one difference in the newer version: Laurie’s the one who tumbles from the window. Proof that the scene has flipped like a coin is found even in the details, as when Laurie plummets, she lands on her head, whereas Michael landed on his tail. 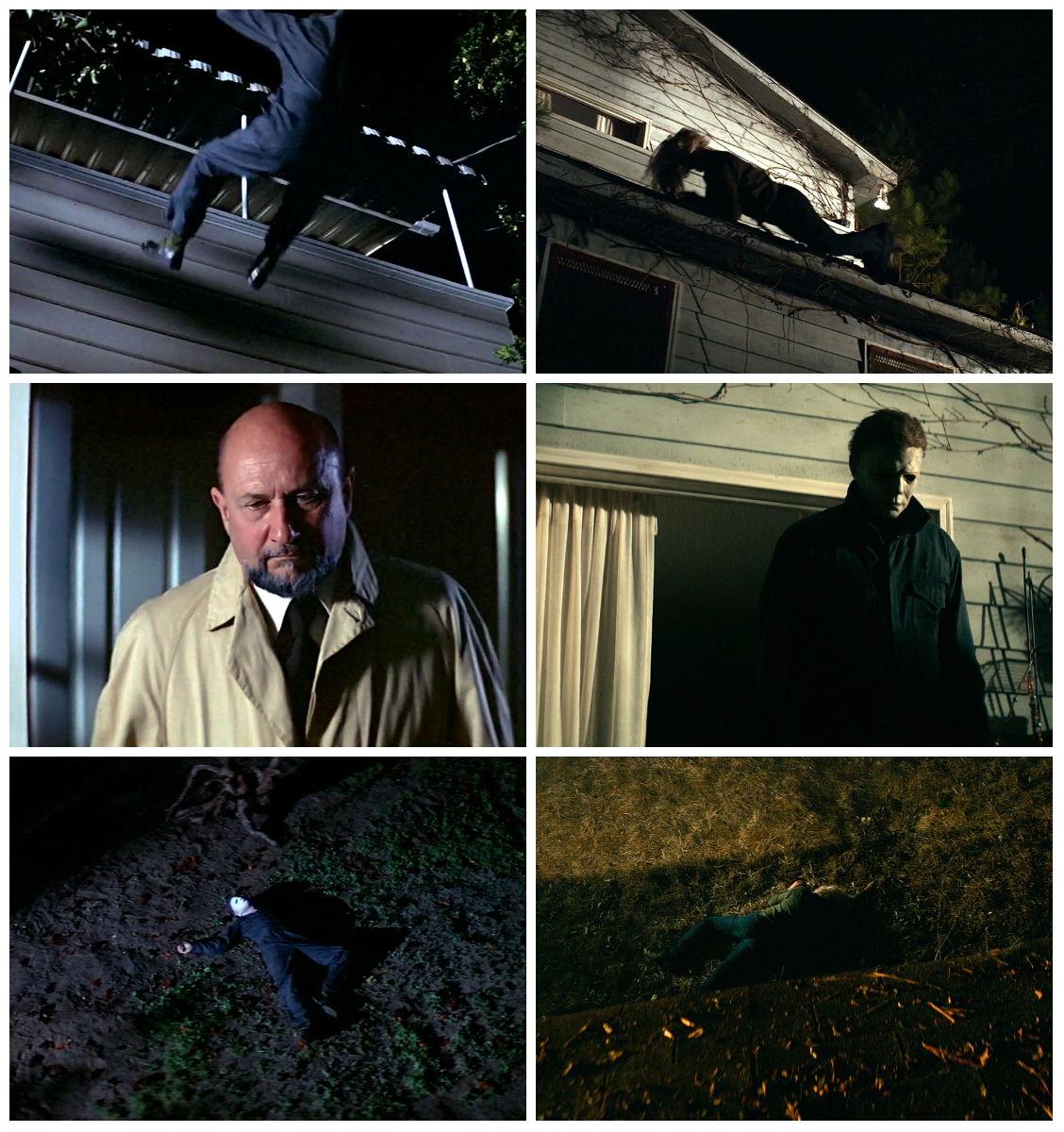 Yet, that’s not the last time we see the switch. In the original Halloween, there’s the iconic moment when Michael’s masked face slowly emerges from the darkness of a closet, unbeknownst to a panicking Laurie. That scene exists in the recent film as well, though it’s Laurie’s face that appears out of the darkness, and her expression is the polar opposite of what it is in Halloween 1978. 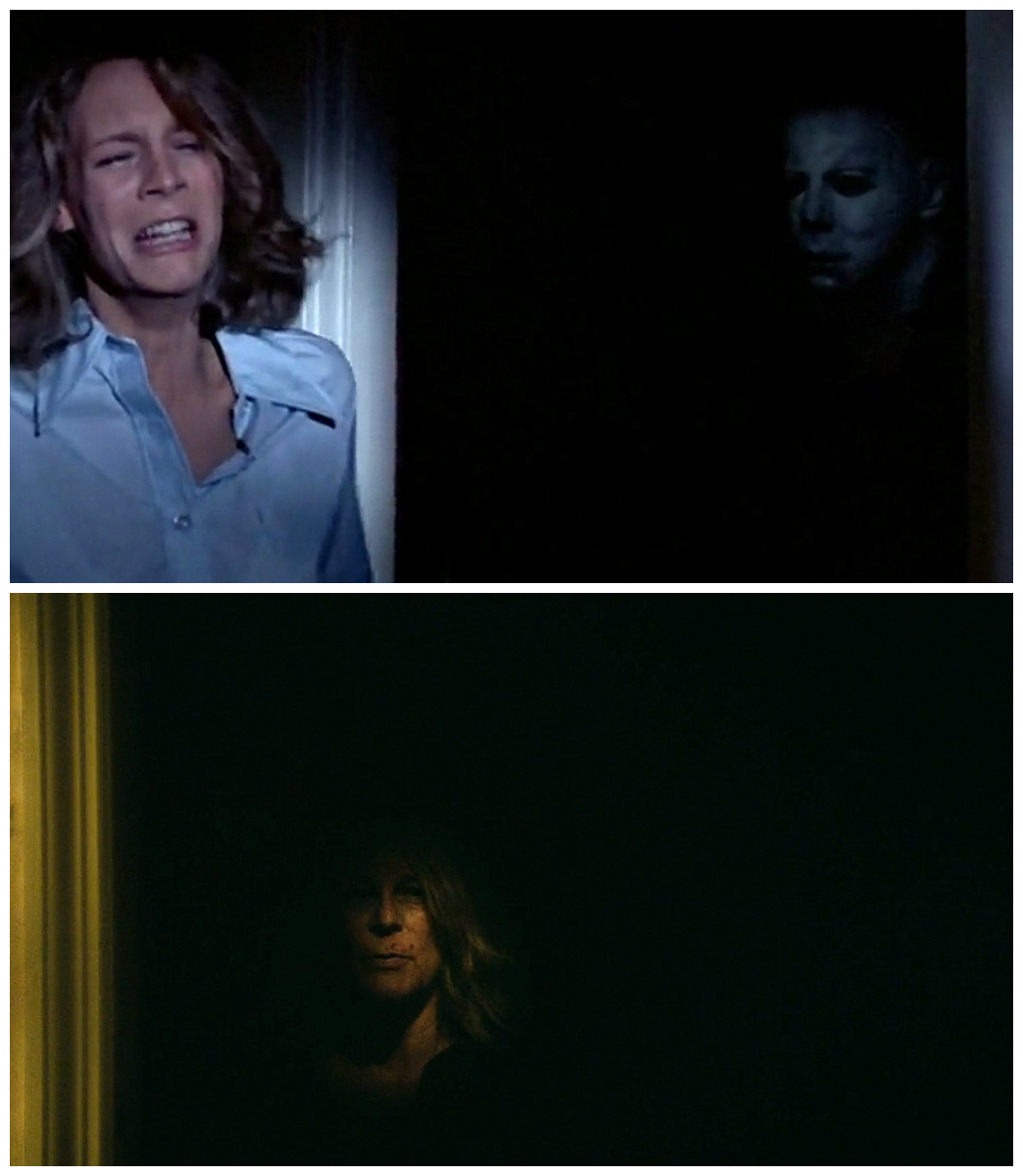 Obviously, then, Director David Gordon Green had a point to make regarding the interdependent nature of Michael Myers’ and Laurie Strode’s relationship. That said, not everything was shown reversed. Halloween 2018 also contained a string of Easter eggs referencing most of the films in the Halloween franchise.

Starting with the intro: the opening titles of Halloween 2018 include a time lapse video of a jack-o-lantern decaying in reverse, symbolising the rebirth of Michael Myers and the film series. This choice of image is a nod to the first three Halloweens, for the original shows a simple jack-o-lantern with a flickering candle, the second (Halloween 2 (1981)) shows a pumpkin being slowly torn in two (reinforcing the idea that it’s part two), and the third (Halloween 3: The Season of the Witch (1982)) brandishes a 2D digital pumpkin because it’s a plot device used later in the film.

Many other plot devices were also borrowed in tribute from the first film. One clear example is the method of Myers’ escape, which in 1978 and 2018 involved a transportation accident. You’d think after 40 years they’d develop safer ways to move the criminally insane than old buses at midnight. 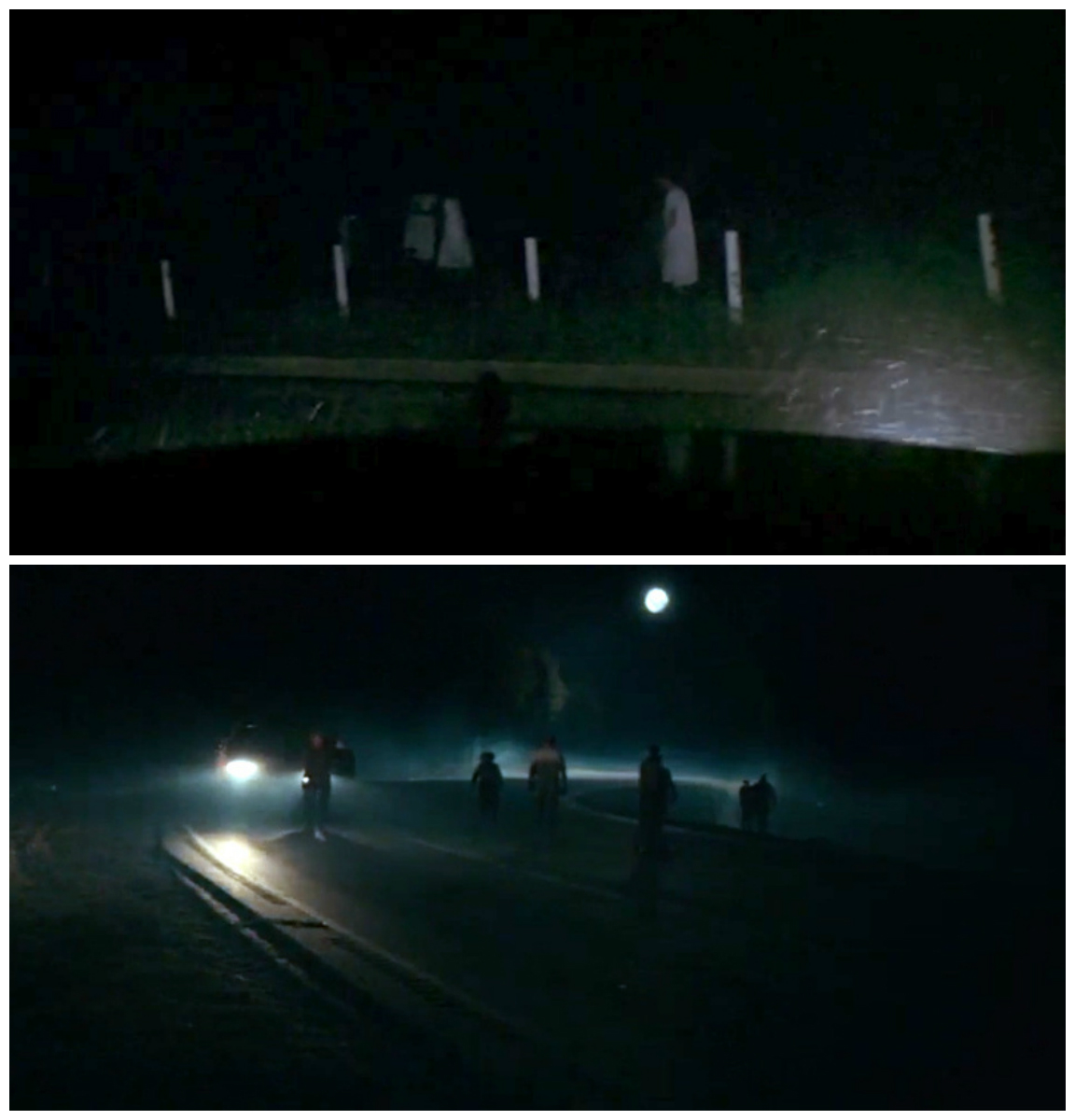 Michael Myers’ method of obtaining clothes is also the same in the original, the latest film, and even Halloween 4: The Return of Michael Myers (1988): Mechanics. Michael makes it clear why another term for a garage is a “body shop”. 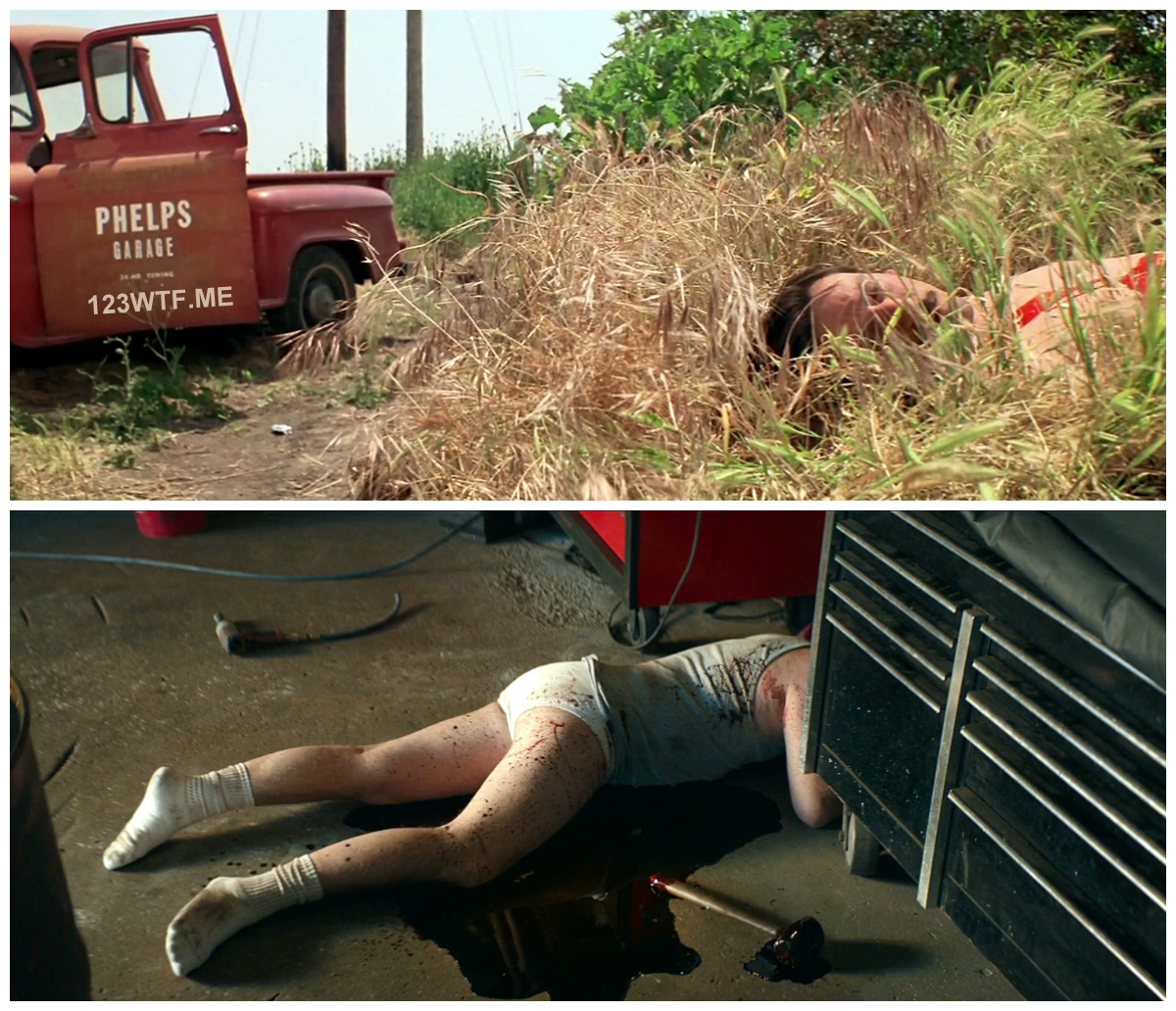 Another nod to the original is how the babysitters and their charges in both films watch old horror movies on Halloween night (though they’re in colour in the newer film), but even more interesting are the sheets.

Those who remember the first Halloween will no doubt recall the sheet scene, where Laurie walks into her bedroom, glances out her bedroom window, sees sheets drying on the line and … Michael Myers is right there, looking up at her!

Well, Halloween 2018 uses a sheet, too, only there’s a slight twist in it, for in that bed linen hides a red herring. When one of the random victims (Miles Robbins as Dave) steps out onto the back porch to treat himself to a tricky kind of cigarette. Those of us who remembered the first film could expect to see Michael step out from between the sheets and tear Dave a new one, but no, the only thing between the sheets is Myers’ absence (as he’s busy in the little boy’s room preparing to kill the babysitter). 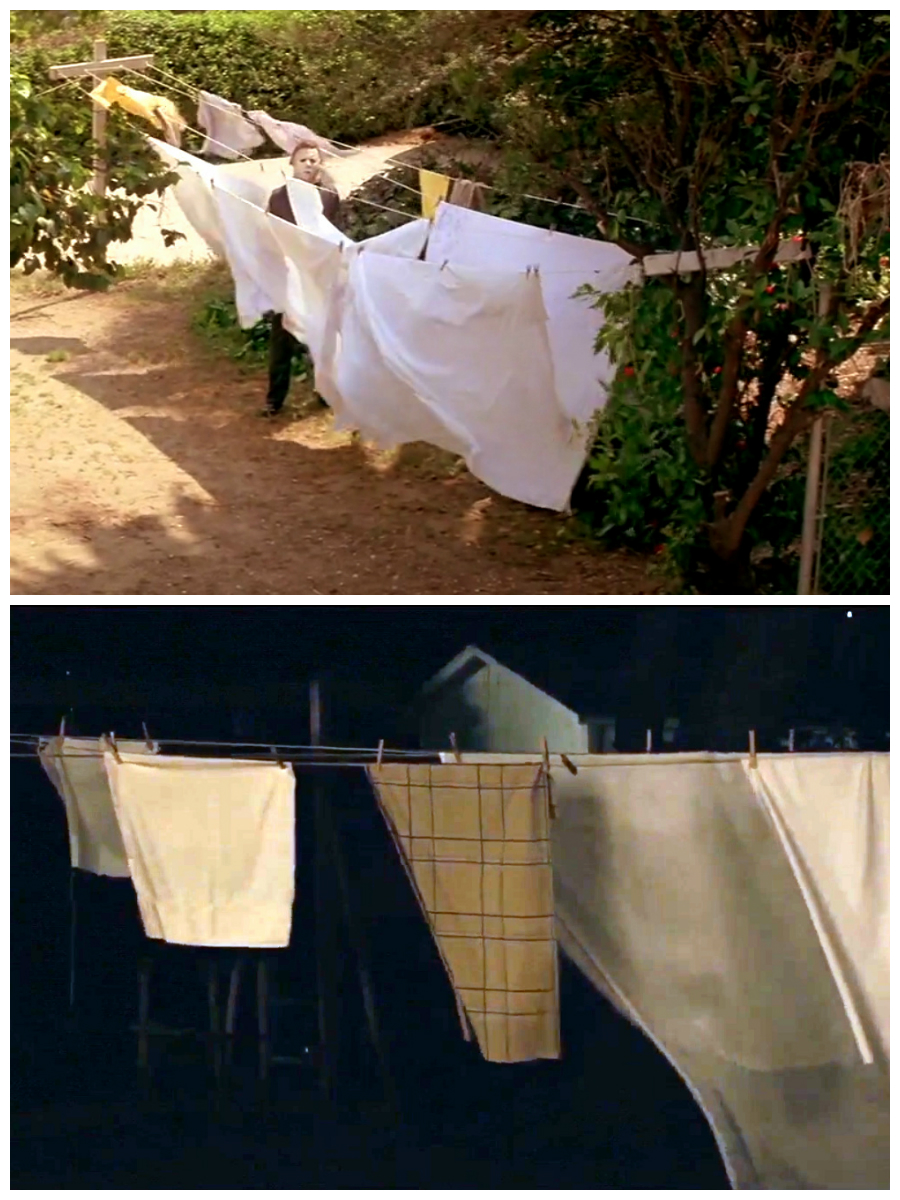 You’d be wrong in thinking the original Halloween is the only film in the franchise that’s inspiring, though. Halloween 2 is represented, and most of those references are named “Elrod”. But before we turn that tombstone, one of the Halloween 2 murders that’s duplicated in 2018 is Alice Martin. Alice is the young woman on the phone whose friend was warning her that there was a homicidal maniac on the loose. While she’s on the phone, after being scared by a neighbour’s scream, young Alice meets Michael first hand. This murder is repeated in Halloween 2018, where another woman is on the phone listening to a concerned friend’s warning just before she suffers a stabbing pain in her throat. 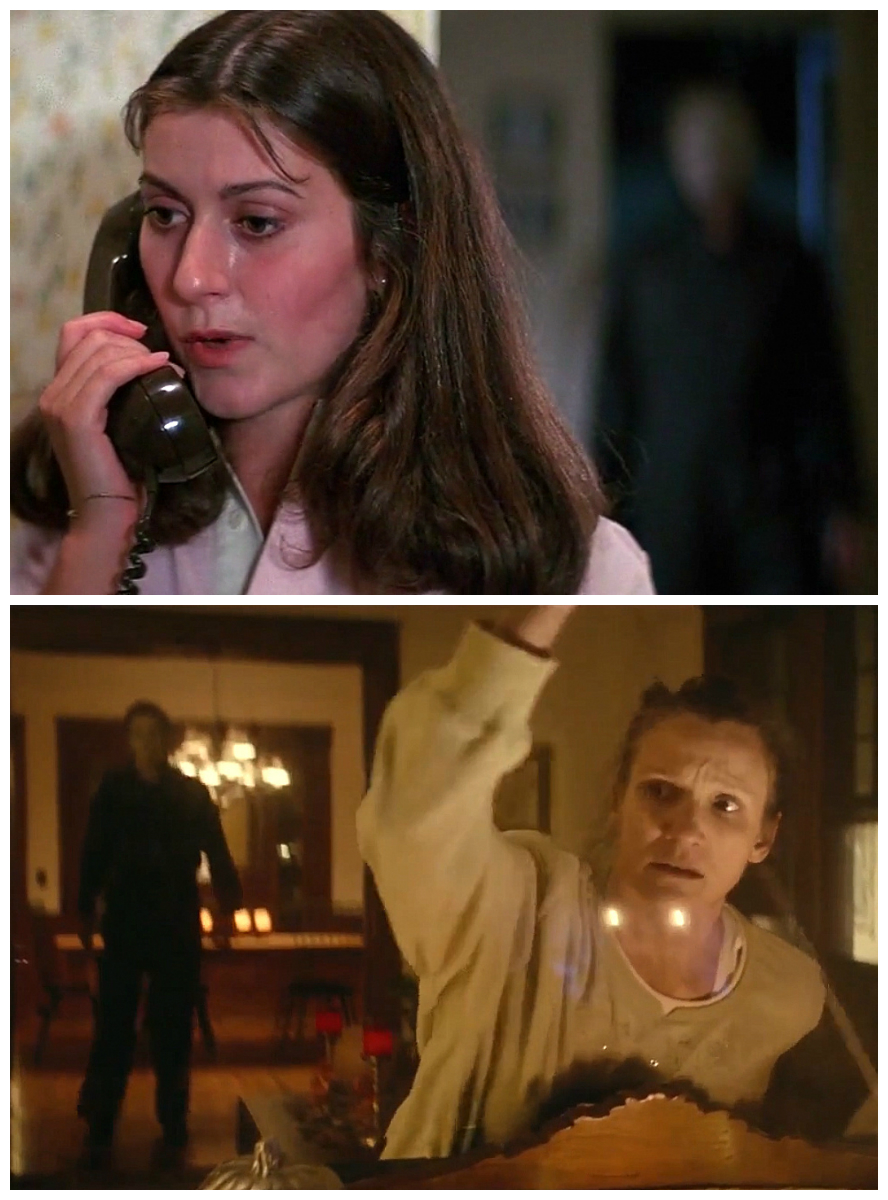 So, whose scream did Alice Martin hear (and shrug off as spousal abuse) in Halloween 2? Her neighbour’s, Mrs. Elrod, who, in fact, shrieked because she found bloody smudges in her kitchen after Michael broke in and stole her lucky carving knife. In tribute, Halloween 2018 has its own Mrs. Elrod, a housewife bedecked in the same bathrobe and hair curlers and who is also making a sandwich. The modern version of the woman wasn’t made to last as long as the original, however, because Michael bludgeons Ms. Elrod 2018 with a hammer before stealing her carving knife. Some things never change. 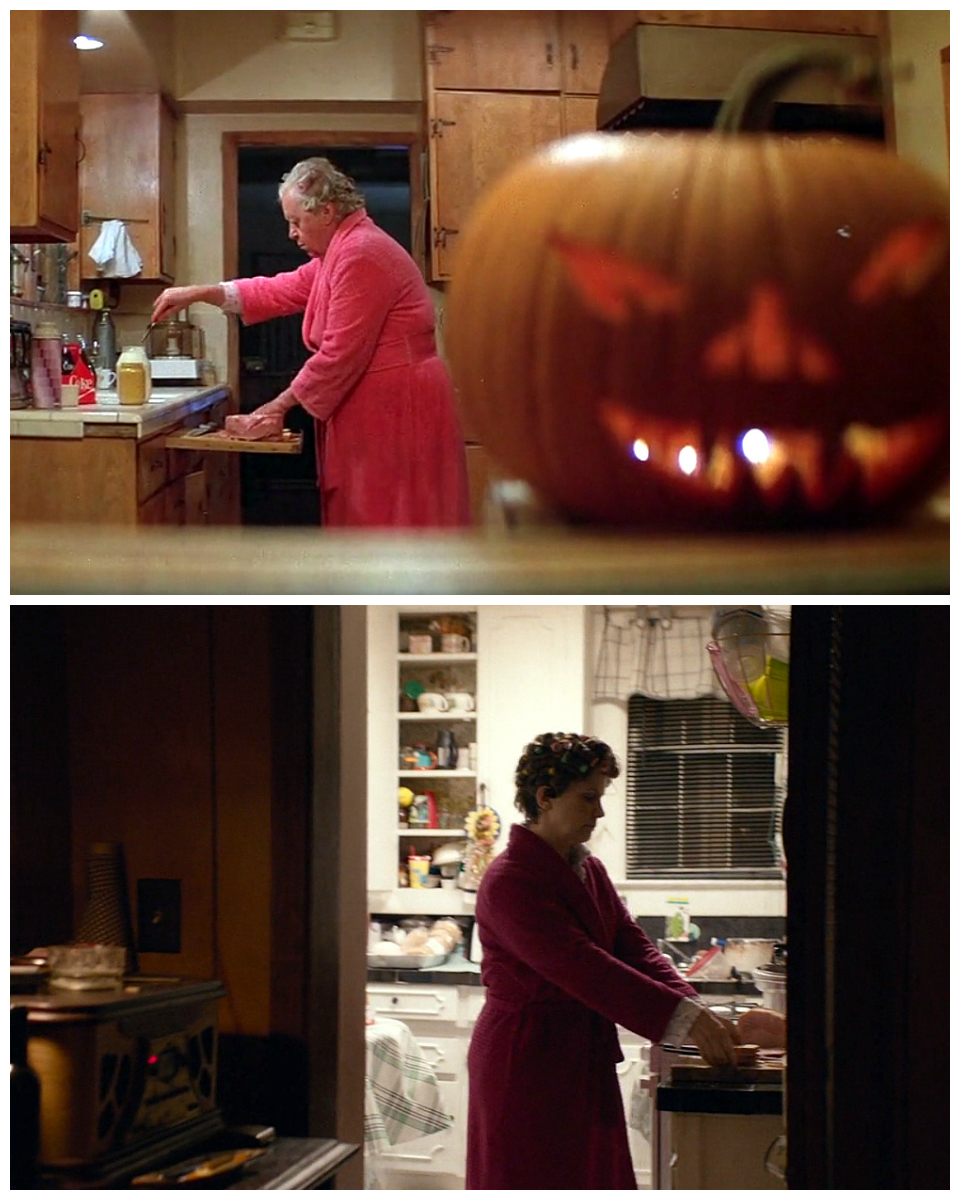 Immediately following this attack, there is yet another recreation of a scene from the 1981 sequel. Michael walks through the new Ms. Elrod’s living room and pauses at a child’s playpen before moving on and sparing the infant. This is reminiscent of Halloween 2 when, in the hospital, he comes across a maternity ward and stops in front of a newborn’s crib before moving on and leaving the child alone.

This isn’t the last we hear of the Elrods, however. In the most recent movie, Alyson’s friend Oscar (a saucy Drew Scheid) is cutting across neighbours’ back yards when he spies a mysterious figure at the edge of the motion sensor lights. Does he interpret a lone figure standing alone in the dark wearing a mask as a threat? No, he thinks it’s the proprietor, Mr. Elrod! 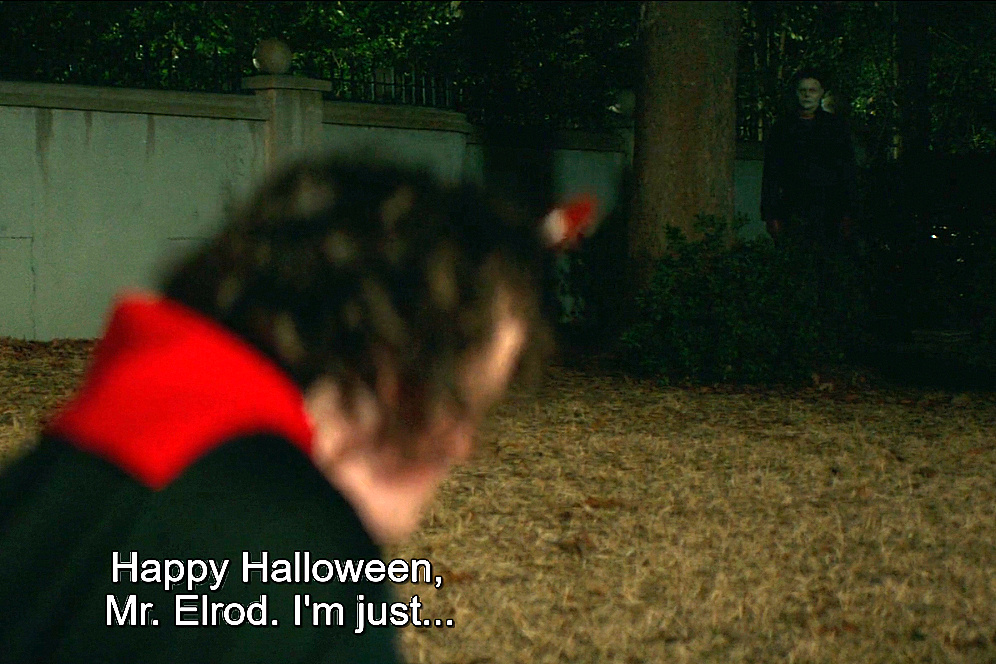 Halloween 3: The Season of the Witch enjoys a direct reference, as well. The 1982 corporate witchcraft disappointment was centred on the idea that electronic devices built into Halloween masks would explode and kill the children wearing them. In Halloween 2018, children can be seen wearing the three styles of masks (a skull, a witch and, of course, a pumpkin) when Laurie pulls up to the site of a Michael Myers murder scene. 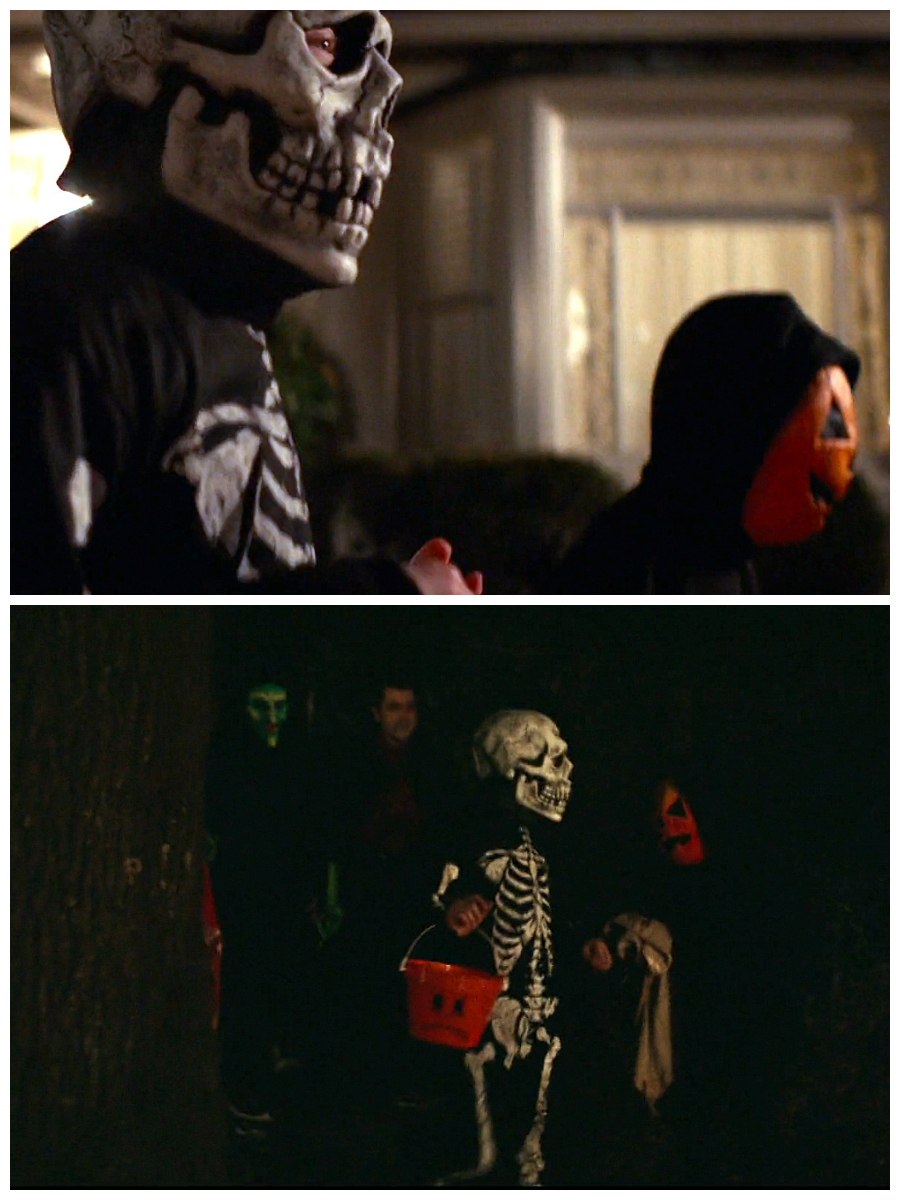 Another major reference found lurking in Halloween 2018 is the gas station setting. When English journalist / podcaster Aaron Korey (Jefferson Hall) wanders about the garage looking for his partner in true crime, he stumbles, almost literally, on some of Mike Myers’ recent handiwork. This moment is a recreation of Halloween 4: The Return of Michael Myers, when Dr. Loomis (Donald Pleasence) arrives at a gas station and, looking for an employee, discovers he is wading through the site of Myers’ latest spree. To drive home the fact that it’s an homage, the ice machine, barrels, and tires in front of the building from Halloween 4 are clearly visible in Halloween 2018. 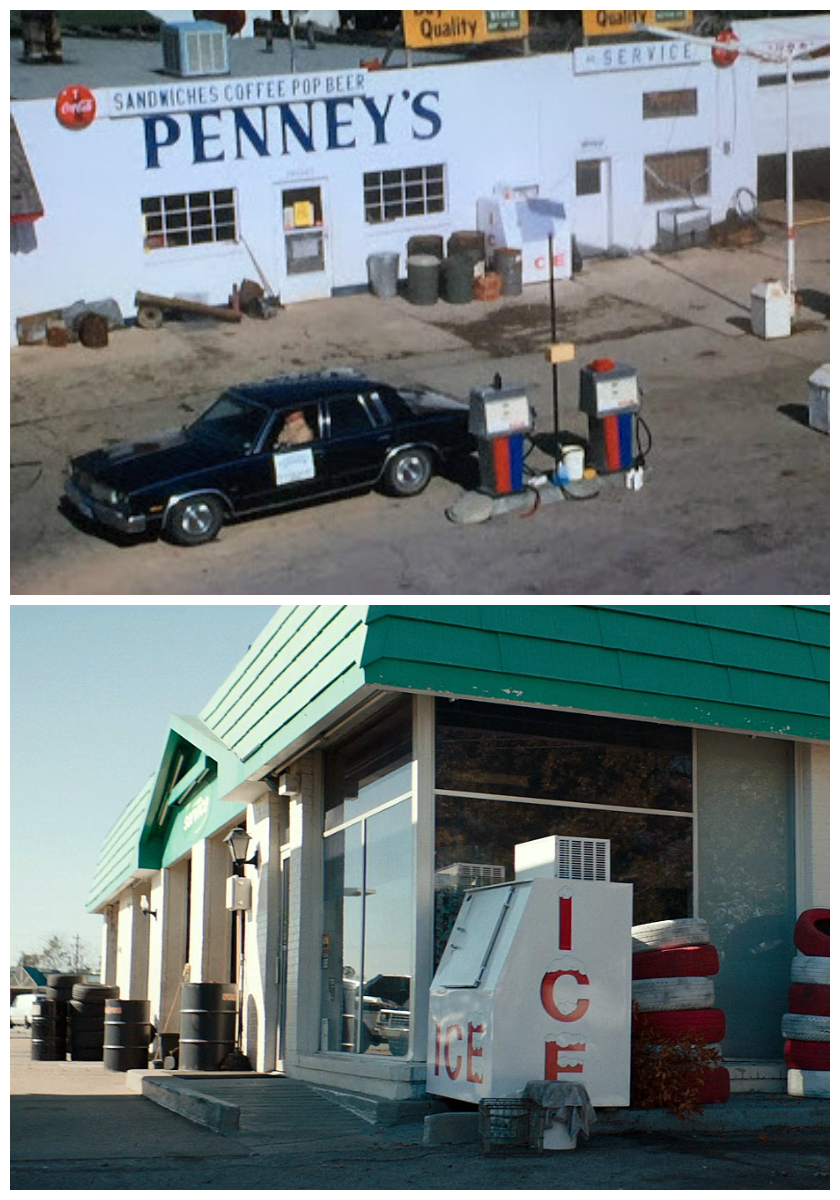 Those keeping a tally will note Halloween 2018 contains Easter eggs linking it to Halloween, Halloween 2, Halloween 3 and Halloween 4. How about one last veiled reference for the road? For the road is an appropriate expression here, because the tie-in is painted on the side of a van. Back in the gas station car park, a small church bus pulls up beside Aaron at the pumps, and out of all the possible names for a church, they chose to name theirs after a Halloween film: Halloween Resurrection 2002). 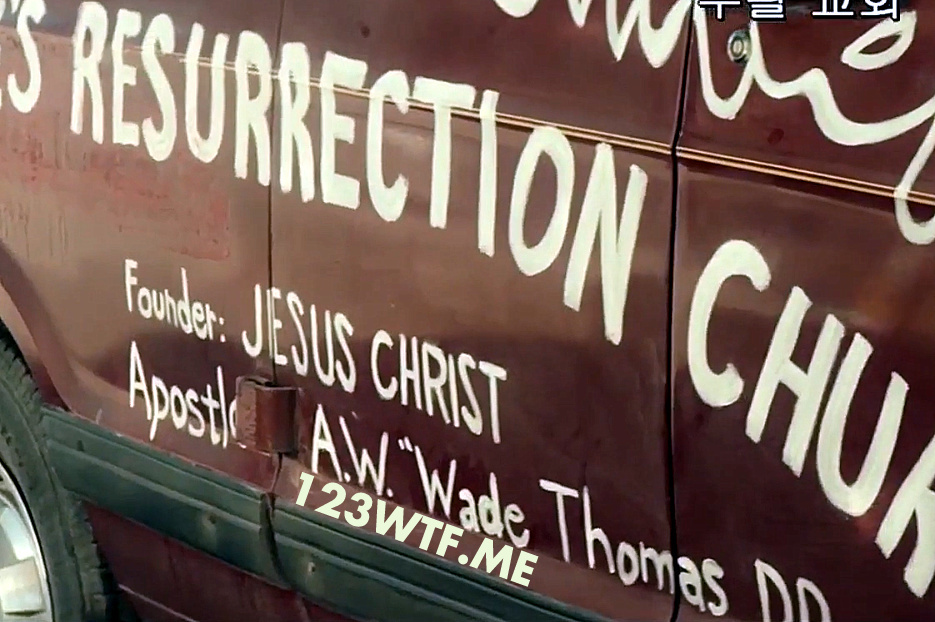 That’s all for the moment, at least until this column resurrects with more Easter eggs from another popular film!

(The above article was excerpted from my detailed synopsis of Halloween (2018). If you care, many more Easter eggs, stills, GIFs, explanations, and god-awful jokes can be found at 123WTF: Halloween 2018.)