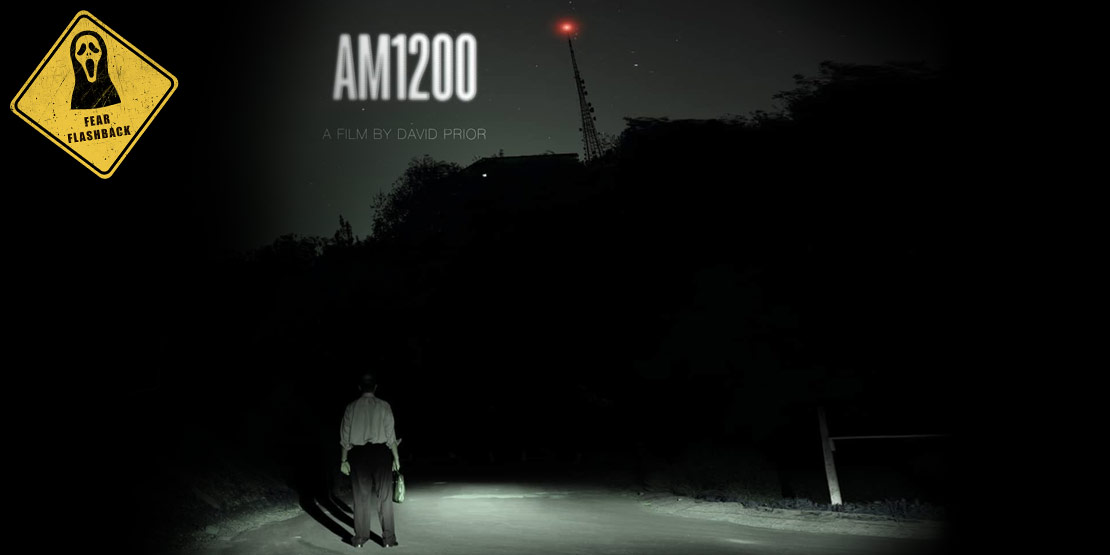 “They say it’s better to reign in Hell than serve in Heaven. What about serving in Hell? What if the only option is to serve in Hell?”

I think I first heard about AM1200 around 2013 as part of a discussion of ‘weird’ events. Things that people had seen or experienced or heard about that were out of the ordinary, strange or just unexplainable. AM1200 was brought up as a film that was based on a strange experience that the director had.

At the time the film was available on Vimeo, and remember enjoying it – though at 40 minutes it was an odd beast, too short for a feature, to long for a short-film. A visual novella of sorts. It’s got a distinctly Lovecraftian vibe, especially in the last third, and I was intrigued enough to want to know more about the basis for the film. The original event that inspired it. The only way to get that story, at the time, was in the liner notes for the DVD and you could only get that by ordering a copy directly from the filmmaker, David Prior.

So that’s what I did. A few weeks later a plain, white bubble-wrap envelope appeared in the mail and I immediately pulled out the liner to read the story. It was, as is usual with things you build up in your mind, a little disappointing. It had that nice little frisson of the uncanny to it, but it was essentially just a couple of moments of oddness on empty road in the dark watches of the night. It was affecting to Prior at the time, but those sorts of ephemeral moments and impressions are hard to share, especially in print.

I was happy to have it and to have read the story the film was inspired by, but I don’t think I even re-watched the film. I slid the liner back in and put it on the shelf. I might even have forgotten I had it. Until this week, when I was re-ordering some of my shelves and saw this little piece of arcana that I only half-remembered watching.

The Medium
I watched my DVD copy of AM1200. It has those liner notes I mentioned as well as a director’s commentary, trailers, bios and a bunch of animatics (previz animations the director used instead of storyboards). The film is still available for streaming on Vimeo – in HD – and David Prior will sometimes respond to comments. There’s no other way to get the film at the moment – the website says it’s ‘sold out’ – though you can sign up to be notified if it becomes available.

The Movie
AM1200 follows a businessman named Sam (Eric Lange), who’s on the run from some bad choices. While on an empty stretch of road in the middle of the night he picks up a strange broadcast from a radio station with the call letters KBAL. It sounds like someone in distress, asking for help. He ends up at the radio station – perhaps by accident – when circumstances force him to enter and discover the secrets that lie within.

David Prior is primarily known for documentaries and DVD production (Fear of the Flesh, the Making of the Fly and This Is the Zodiac Speaking), but he’s missing his calling. He’s got a deft hand with the camera and mood, really building the sense of foreboding and eeriness. The first half is mostly building up to what’s coming, but I was never bored and the increasing number of little off elements unsettle and disturb both us and Sam as the film goes on. I’ve never been so keyed up by a flashlight going off, for instance.

The actors do a great job, though Ray Wise is a maybe little too manic in a small (but essential) part. It took me a few minutes to recognize John Billingsly, who played Dr.Phlox on Star Trek: Enterprise and who I’d just seen the night before in the second season of Amazon Prime’s Homecoming.

It’s weird, there’s a lot of standard horror movie fare – the insect noises cease in one scene, the lights flicker mysteriously, and a car dies in an inconvenient location – and yet the film lends all of these a weight of menace that seems all out of proportion to the actual events.

The end comes pretty abruptly, with panic and violence and blood and madness, but I kind of liked the length of the piece. It doesn’t overstay its welcome. Like I said before, It’s a novella rather than a novel, and works great on that level. There are some moments of CGI – and it’s low-budget 2008 CGI – but they’re well done and mostly used to good effect. At least one effect that LOOKS like CGI (a blurring of the frame to indicate a mental disturbance) was actually handled by unseating the lens and then locking it back in – pretty effective with an anamorphic lens!

The Bottom Line
AM1200 is a cool little film horror film. At a short 40 minute running time it doesn’t drag or waste a moment. It feels a little like Hitchcock by way of Lovecraft, and reminds me of more recent films like The Void, though primarily in mood rather than effects. It’s definitely worth checking out – and hey, it’s only 40 minutes!

Notes: The official website, http://www.am1200.com/, has a number of extras – including the original background story that I’d purchased the DVD to get! There’s also a copy of the script. I was happy to see an announcement that a feature-length version is in the works. David Prior has also finished production on his first feature film, The Empty Man, which is slated for release in December of this year. I’m looking forward to it.