From the cinephiliac minds of Sailor Monsoon and Vincent Kane comes a new collaborative review series called Double Impact! For these opinion pieces, we watch a film, break it down and analyze it, and then haphazardly try to attribute points and awards to individual scenes and/or actors. Through our convoluted thought process, neither one of us truly understands, we will definitively determine whether or not certain sacred cows are worthy of praise and alternatively if childhood favorites hold up or are better left in the past. The goal is to get you to rewatch old films you love, check out great stuff you haven’t and skip the overrated classics you’ve heard about but never got around to. This is a celebration of the stuff we love and a takedown of the shit we don’t. This is Double Impact!

In 1880s Australia, a lawman (Ray Winstone) offers renegade Charlie Burns (Guy Pearce) a difficult choice. In order to save his younger brother from the gallows, Charlie must hunt down and kill his older brother (Danny Huston), who is wanted for rape and murder. Venturing into one of the Outback’s most inhospitable regions, Charlie faces a terrible moral dilemma that can end only in violence.

Sailor: What are your thoughts on westerns? Like em? Love em? Hate em? Indifferent?

Kane: Before I answer that question, does the western you clearly picked have any tits in it?

Sailor: No it does not.

Kane: My enthusiasm for this film just plummeted and my answer is, no.

Sailor: Are you pouting because my pic has no nudity?

Kane: I don’t pout but yes I absolutely am.

Sailor: Not every movie needs tits!

Kane: Name one movie that wouldn’t have been improved with tits!

Kane: Incorrect. Because Hemsworth could’ve taken his shirt off at one point and that, um… it could’ve… I mean guy tits are tits too, so.

Sailor: Did you just have a stroke or are you turning gay at the thought of Thor half-dressed?

Kane: I’m just saying I’d rather see him with his shirt off over any of the girls. And if you don’t want to see him without a shirt on, you’re not woke or something.

Sailor: What the hell are you even rambling about?

Kane: Am I trying to put off watching whatever trash you’re trying to get me to watch? Maybe. Am I trying to stumble my through some half-assed reverse sexiest point just because you happened to pick the one movie I don’t want to see tits in because of who those tits would be attached to and because I didn’t want you to prove your point.

Sailor: first thing things first: 1) the movie isn’t trash and 2) I hope it was worth it.

Sailor: Calm your jets, we’ll get there. Just let me enjoy this moment.

Kane: You won that bullshit with a technicality. My point wasn’t that all good movies have tits or need tits, it’s that all westerns need some sort of nudity because they’re always slow. Slow movies need nudity and/or action to keep my attention. Certainly not horses and tumbleweeds.

Sailor: This movie is slow but…

Kane: You don’t need to finish that sentence. In fact, you didn’t even need to say the first sentence. I know it’s slow, it’s a western. They’re ALL fucking slow.

Sailor: I haven’t threatened to stab anyone in a long time but it’s time to bring my knife out of retirement.

Sailor: You don’t even know what the movie is, you jackass!

Kane: That ain’t gonna stop me from clicking play on anything. Like literally anything. I don’t care.

Sailor: Well then we’re changing it.

Kane: No the fuck we’re not.

Sailor: Well, good look finding it because it ain’t on nothing. 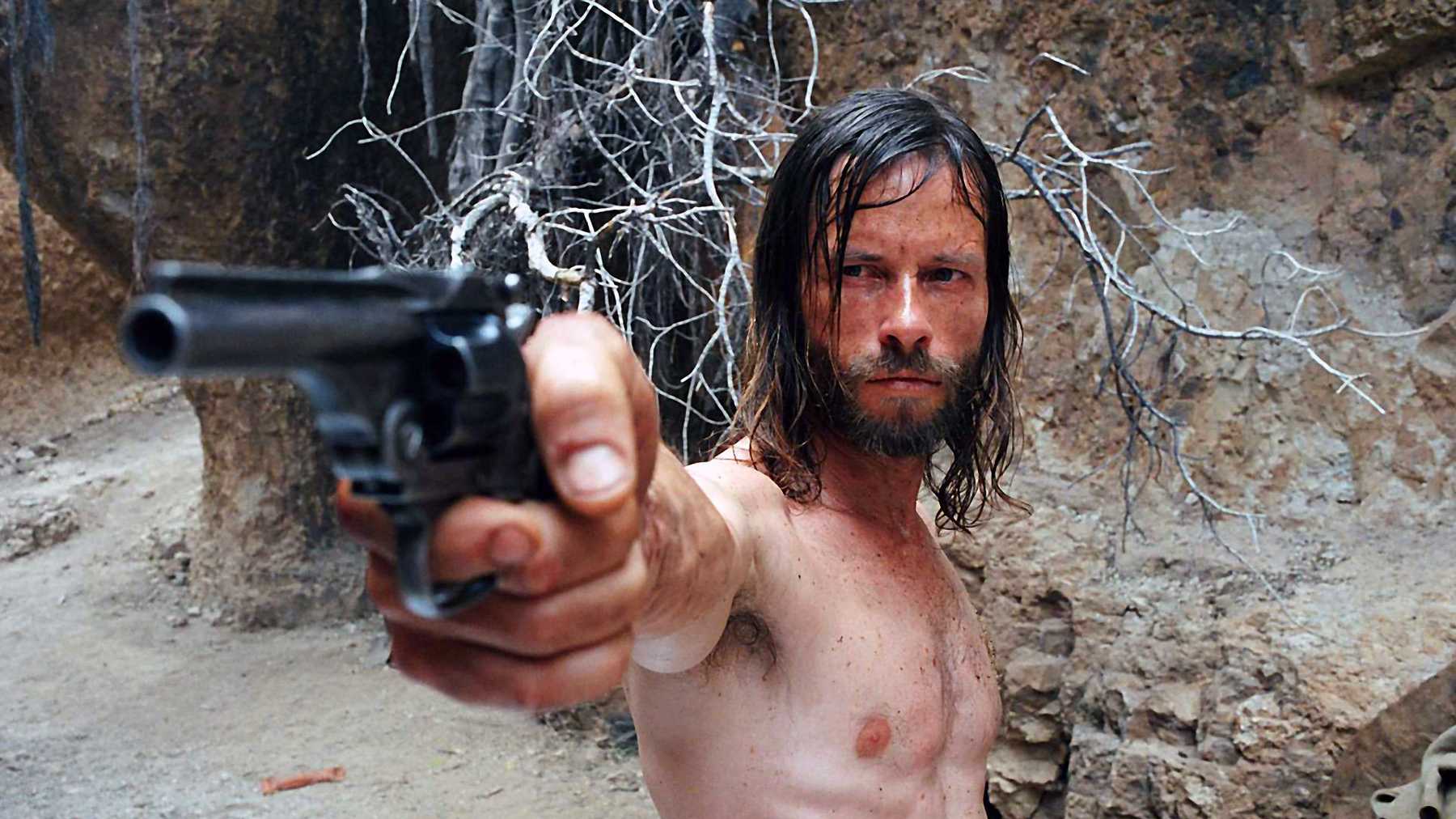 Sailor: So, what did you think?

Kane: It was slow but unlike almost every other western I’ve seen, it was never boring.

Sailor: It’s definitely not an action-heavy western but that’s not its goal. The film isn’t trying to entertain or excite; it’s trying to hypnotize the viewer.

Kane: I can see that, yeah. That score was really pulling me in.

Sailor: It’s funny that the guy (Nick Cave) who did the score, also wrote the movie because they feel so intertwined. I don’t think either would work as well without the other.

Kane: I can’t think of another film that could use that score.

Sailor: It marries the plot to the images but also adds another dreamlike layer to everything.

Sailor: I mean, it is kinda but there’s more depth to it than that. Not that filmmaker’s like Alejandro Jodorowsky lack depth but they use soundtracks in a completely different way than Hillcoat does here.

Kane: I wouldn’t know. But what I do know is that Pearce is great but Winstone steals the movie.

Sailor: The cast across the board is terrific but like you said, Winstone is the true MVP.

Sailor: There’s a scene when Winstone has to cry without changing his facial expressions and it’s amazing. He’s balling his eyes out but the face ain’t moving.

Kane: Yeah, that scene was great. I need to see more of his work. Not to change the subject but what are his best performances.

Sailor: Or maybe even this.

Kane: I also love how Hurt can be in a movie for like five minutes total and can still create a memorable character.

Sailor: Yeah but you know what I mean. Nowadays pretty much every actor looks like a Norwegian fashion model. There are no more uglies that movies, which is a shame.

Kane: Why do you want to see uglies?

Sailor: I just miss the time when everyone looked unique. They had character in their faces.

Kane: I can’t argue with that.

Sailor: Ok. We’ve covered the cast, the soundtrack, and a little bit of the director. What else we got?

Sailor: I love how quick, brutal and in your face it is. The director never lingers on the violence for more than a couple of seconds.

Kane: I legit didn’t see that coming. Literally, if I blinked I would’ve missed a couple of the more gruesome deaths.

Sailor: I have Hillcoat high on my shortlist to direct the new Wolverine for a reason. His films deal with unpredictable violence and that kinda sounds like Wolverine to me.

Kane: I don’t want him in the MCU.

Sailor: I don’t either but it seems like all the old producers or whatever are gone, so directors should have more freedom.

Kane: Tell that to Edgar Wright…

Sailor: Brutally violent and eerily hypotonic, The Proposition is an Australian western unlike any other. It’s singular in tone and is one of those films that’s made up of nothing but hooks. If the shocking kills don’t hook you, the incredible cast will. If the acting doesn’t, the score most likely will, and if the lush cinematography does nothing for you, there’s always its unmistakable style. A grab bag of different types of greatness, The Proposition constantly throws A+ quality entertainment at the viewer. It’s not one of the greatest westerns ever made but in a genre that’s overstuffed with diamonds, it definitely qualifies as a lesser gem.

Kane: I’m not that big on Westerns but the ones I do enjoy usually add something different to them that piques my interest. Director John Willcoat was able to do just that here. It was gritty and filthy. Brutal and hypnotic. The ability for so many aspects of this film to be able to stand on their own is something rare. Each actor could hold the camera on by themselves. The imagery alone was gorgeous and the score created a world of its own. A fine Western that should be enjoyable for fans of the genre or not.

Ok, so who is winning in a fight between Ray Winstone, Tom Hardy, Marv from Sin City, The Incredible Hulk, and Lena Dunham?

You had to throw her in there, didn’t you?

Totally. She wipes the floor with all four of them.

I mean it has too or we are sexist pigs, right?

I’m fine with being a sexist pig.

Well, we can’t all agree.

But here is the kicker…

I haven’t said what it is yet!

You have to sleep with the winner.

Or in this case, she sleeps with you and treats you dirty like she did the Hulk.

Look what she did to the poor Hulk.