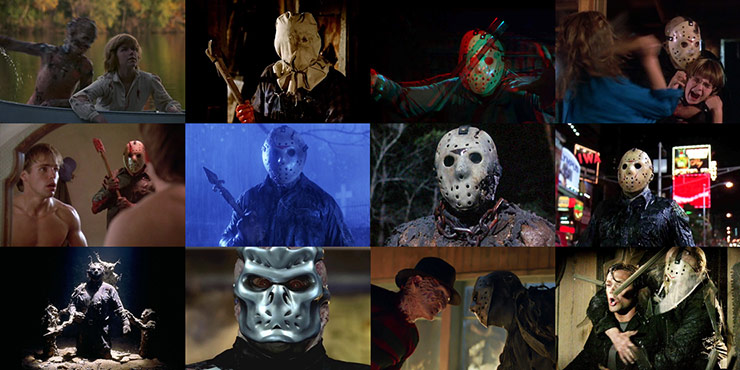 It’s Friday the 13th! It’s almost October! It’s a thin excuse to rank some classic slasher flicks! Wait… did I say that out loud?

I love the Friday the 13th movies – even the terrible ones – but I’ve always had my favorites, the ones I can watch multiple times even if I know who gets killed and when and how. I think every fan does. And every time an actual Friday the 13th comes round in the Fall I find myself thinking about the best of the series – and the worst.

So just for fun, this Friday, let’s take a look at my own, personal rank of the Friday the 13th films – from the bottom of Crystal Lake to the top of the overturned RV.

Jason gets on a boat, kills a bunch of teenagers, follows the survivors to New York and then gets turned into a little kid by toxic waste. I’m not kidding. Along the way he doesn’t kill any people on a subway train despite them being, like, RIGHT THERE. He does punch a guy’s head off, which was entertaining for a second or two. Even the dog lives. And taking Manhattan? More like strolls through it for 30 seconds. I know some people – okay, ONE person – who actually likes this movie, but for me this scrapes the bottom of the toxic waste barrel.

Friday the 13th: the 3D Tech Test. That’s really the biggest drawback of the film – it knows it’s a gimmick film and so it shoves that gimmick into every frame it can. Poles come at you, rats come at you, machetes, pitchforks, popcorn and eyeballs come at you. And because it’s NOT being seen in 3d it just screws with the tension and pacing and you start getting annoyed. Yeah, I see it – stop holding it right in front of the camera for crying out loud. If it wasn’t for the first appearance of the iconic hockey mask I’d say skip this and move directly to part IV.

I still kinda want to see it in 3D though.

As a Friday the 13th movie A New Beginning is seriously lacking in… anything that makes it feel like a Friday the 13th movie, beyond teenagers getting killed. I mean, there’s a finale confrontation with a guy who isn’t even Jason – or believably threatening. The best part is Demon and his van full of fast food. If it was another in a long line of imitators instead of a part of the franchise it might have been better received. Maybe. The film is clearly a set up for the Tommy Jarvis character to become the new Jason and maybe that would have worked out (a part of me thinks seeing Jason doing bad kung fu would be worth the price of entry). We never got to see that because of how hard this entry tanked at the box office.

I saw this in the theater with my brother Scott who is a huge Jason fan. His response after it was over? Meh. That’s mine, too, unfortunately. Aaron Yoo as Chewie was entertaining and the effects were good, but it was just… okay. Nothing special. I watched it again recently and STILL could not tell you much about it, beyond it being quite a bit slicker than any other Friday entry. If you’re going to see one movie with a star from Supernatural in it, see the much more fun remake of My Bloody Valentine.

Two things keep this film from being in the bottom two: a) some pretty spectacular gore (that road sign dissection is pretty nasty) and 2) Duke. If it wasn’t a Friday the 13th movie I could easily get behind the completely gonzo storyline, but it tries to mash The Hidden with Halloween and those two great tastes add up to WTF. Pro tip: never make Jason a slug. I think there’s a universe where this isn’t a Friday the 13th movie and it’s become a cult hit. Body hopping serial killer with a magic bloodline and a character like Duke hunting him? Those crazy folks at the diner? The gore and nudity? Yeah, this is someone’s favorite horror movie in another timeline.

But not this one.

Full disclosure, I hated this movie when I first saw it. I’ve seen it a couple of times recently and my opinion of it is much improved. It’s still Carrie vs Jason – psychic kid vs supernatural slasher – but it’s totally worth it to see Tina kick Jason’s ass all over the place. Plus it’s got Kane Hodder as Jason for the first time. I was astonished to find that there’s a generation of folks who love this entry enough to put it in their top 5. I’m not ready for that, but it’s moved up several spots since I first saw it. I still hate the ending, though. Schlubby McWifeslapper saves the day? I don’t care if he is brought back from the dead by his psychic kid, people who wear cardigans should not be the ones to take down Jason.

This was WAY better than we had any right to expect. It took a decade to fulfill the promise of the final few frames of Jason Goes to (development) Hell, and against all odds New Line gave us a film that felt like it treated both iconic characters with the kind of respect they deserved. (Well, except for that ping-pong scene with Jason.) The biggest drawbacks of the film are the obligatory teens/victims. It’s not that the actors are bad, it’s just that every time they’re on the screen you’re hoping Freddy or Jason kills them. And they do. I just wish they’d have done it quicker.

Jason X is a Friday the 13th movie that divides fans. Really a placeholder to keep the franchise alive while Freddy vs Jason was still in development hell, it manages to inject some new life into the franchise by throwing everything into the future. Yeah, it’s cheesy as hell, makes fun of the whole concept of slasher films (“It’s okay guys, he just wants his machete!”) and has the second stupidest mask (after the burlap sack of Part 2), but it has some decent death scenes, moves at a good clip, and manages to be pretty damn fun.

Look, Friday the 13th is only a step above the classic exploitation flicks of the 1970’s. It features a cast of varying ability, a script which could charitably be called ‘thin,’ and lets dim lighting, gore and (admittedly awesome) music do most of the heavy lifting. I freely admit that much of my enjoyment has to be put down to nostalgia. But I did enjoy it. God help me, yes I did.

Part of me feels like I’m betraying the whole franchise by putting the original this far from first place, but as much as I enjoy it, as much as I’m aware the top 3 wouldn’t exist without it, I still love the others more.

I know some Friday the 13th fans who absolutely cannot stand this movie, because they feel it’s making fun of something they love, ridiculing it. To me, though, it manages to have its cake and eat it too. It works because it’s still a Friday the 13th movie – with teenagers, Jason, murders etc. – and it’s also an action comedy that pokes fun at the ridiculous elements of its own mythology. It’s a meta-comedy horror film years before Scream was a thing. It’s also just plain fun – something that’s sorely missing in the films that were to follow. That it serves as a sequel to my favorite film of the series doesn’t hurt, either.

My first Friday the 13th movie, and the one for which I have the fondest memories. It’s basically a remake of the first film, but as it’s better in almost every way I don’t really care. (I do miss Tom Savini’s makeup, though.) I like the characters more, I like the cinematography (all those great Steadycam shots), I like that Jason is finally the killer (even if he’s looking like the guy from The Town That Dreaded Sundown the whole time). And I love Ginny. She’s my favorite final girl. She’s smart, sarcastic, capable and strong without being a fearless automaton. She’s terrified the entire time she’s being chased, but you can see her overcome it and do what she has to. I always kind of wanted to see that character again – showing up with a chainsaw and a Psychology textbook to save the next batch of teenagers.

1. Friday the 13th: The Final Chapter

In the general sense there’s nothing special about Part 4 – it’s full of standard Friday the 13th stuff, like horny teens, plucky heroes and heroines, and gory set pieces – but in the details it succeeds at doing all those things in the best possible way. It’s the epitome of Friday the 13th movies. If you can only see one of the series, this is the one to watch. I know there are issues with the making of the film – director Joseph Zito was notoriously difficult to work with and there were injuries, walkoffs and threats – but none of it comes through in the film itself. It’s tense and fun and gory and would have been a great sendoff for a classic character.

But then it went and made a ton of money.

So that’s it! My completely subjective ranking of Friday the 13th films. The list has actually changed a bit since the last time I thought about it – which just means I need to watch ’em all again at some point!

So what are your favorite Friday the 13th Films? Agree, disagree, Halloween fan just looking to stir something up? Is your list the same as mine or, as seems likely, is it completely different? What’s your top 5? It’s all good.

The machete, as they say, is in the eye of the beholder.