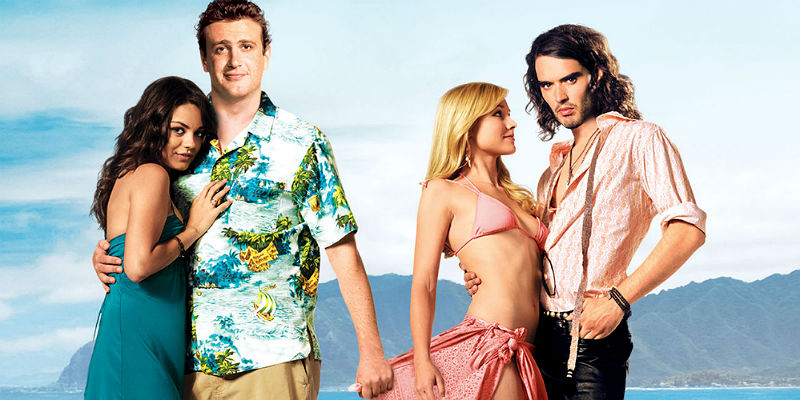 After getting dumped by his girlfriend of five years, television actress Sarah Marshall (Kristen Bell), Peter Bretter (Jason Segel) decides to take a vacation to Hawaii to try and mend his broken heart. Unfortunately, Sarah and her new boyfriend, rock star Aldous Snow (Russell Brand), are staying at the same resort.

Forgetting Sarah Marshall is an underrated gem of a romantic comedy. It handles the reality of getting dumped in a way that is relatable and heartwarming, but also funny as hell. Jason Segel is a likable lead who manages to make Peter’s pain and self-loathing something to sympathize with even while you’re laughing at it.

Segel took a fairly unoriginal plot device and created an affable, engaging script that shockingly doesn’t do a disservice to any of its characters. Kristen Bell could have easily been the one-note bitchy ex-girlfriend, but she’s given enough depth that you also almost feel sorry for her by the end of the movie. Mila Kunis shines in the Cool Girl archetype as Rachel, the resort’s receptionist who helps mend Peter’s broken heart, and while I’m not a huge Russell Brand fan, his unapologetically sexual, free-spirited Aldous Snow is so damn charming that even Peter has a hard time hating him.

The supporting cast, featuring Jonah Hill, Bill Hader, and the film’s MVP, Paul Rudd, carry most of the comedic weight in the film, providing the majority of the laughs in the midst of Peter’s angst and humiliation. And underneath the abundance of humor is a really sweet, captivating romance that begins to blossom between Peter and Rachel. Kunis proves in this movie that she has what it takes to lead a film, and I loved her chemistry with Segel. It helps that Rachel is a strong character and love interest with an actual personality, flaws and all.

Being a Judd Apatow film, one expects the raunchy shenanigans that come with an R-rating, and Forgetting Sarah Marshall definitely delivers. But beneath the pratfalls and wang dangling is a raw, vulnerable look at heartbreak and the emotional difficulties that accompany it.

Sure, I could have done without Jason Segel’s dingaling flopping about, but this movie is warm, funny and so, so quote-able. It is the perfect romantic comedy for anyone who hates romantic comedies. Also, Dracula Musical needs to be a Real Thing.