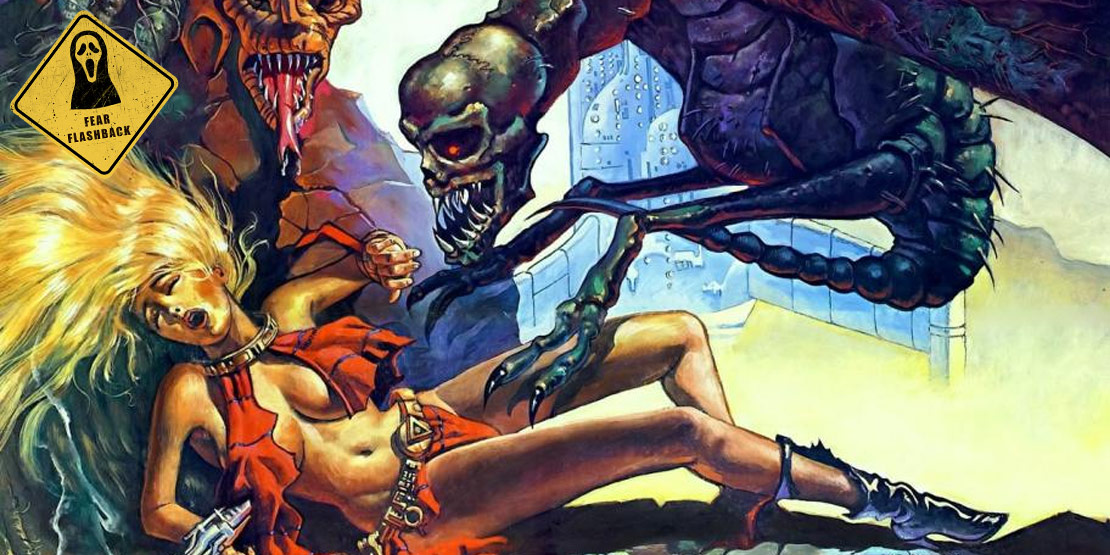 First things first – I am always disappointed that Eddie Albert was NOT in this movie. Instead, it’s his son EDWARD Albert. He does a decent job as ‘mustachioed hero’ Cabren – but I kinda wanted to see the guy from Green Acres in a sleezy Corman film. Ah well, at least we get Ray Walston.

Galaxy of Terror is a movie I know I saw a few times back in the late 80’s/early 90’s. Probably on VHS and certainly in a pile of similarly trashy sci-fi/horror films like Creature or Corman’s own Forbidden World. My adolescent checklist for horror movies was generally restricted to three things: 1) Is it scary? 2) Is it gory? 3) Is there nudity? Any film that could check one or more boxes got added to the pile. (Spoiler: Galaxy of Terror does not check box #1.) Of course with a VHS cover you could never be sure, and we often ended up with films that satisfied none of the requirements. Which is why you always had one or two back up films you’d already seen, just in case. 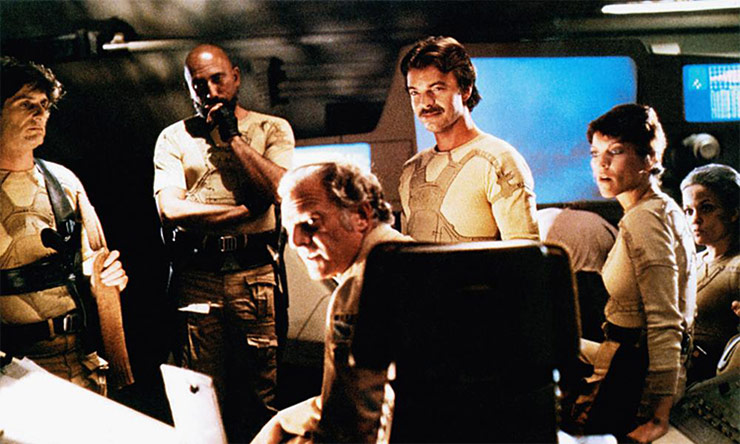 Galaxy of Terror is probably most famous for its production designer, some guy named James Cameron. Wonder whatever happened to him? (Bill Paxton was also involved, as an uncredited set dresser.)

The Medium
Galaxy of Terror is streaming for subs on HBO Max/Now/Go, Cinemax and Direct TV as well as for rent and purchase on the usual places. There’s also a 2019 Blu-ray release with a surprisingly good transfer (and a decent upgrade from the bare-bones 2010 release.) The extras on the Blu-ray include a commentary and a new making-of featurette.

The Movie
Galaxy of Terror follows the crew of the starship Quest on a rescue mission to the planet Morganthus. They’ve been sent to help a crashed ship by the glowy-headed Planet Master who we see early on playing some sort of computer game with an old woman named Mitri. There are references to ‘a risky move’ and more cryptic nonsense.

Once the ship arrives at Morganthus (a trip that takes approximately 3 minutes – the captain isn’t big on things like protocol or the safety of her crew) something on the planet forces the ship down. 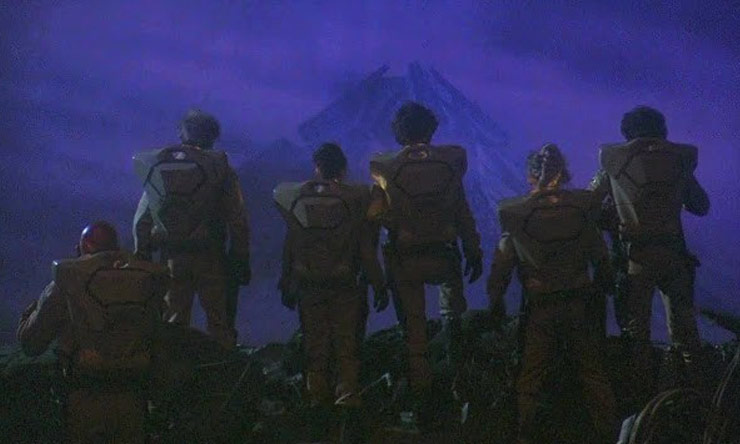 The crew goes to investigate the crashed vessel, finding that almost everyone has been horribly killed (there are a few people missing). The standard protocol when finding bodies killed by unknown means in a crashed ship where you’re supposed to be investigating/rescuing seems to involve burning the shit out of them with lasers. (Screw evidence! I’ve seen enough crazy sci-fi movies to know these corpses are likely infected or zombies or something. Burn ‘em, burn ‘em all.)

Surprisingly, they do retrieve one body for examination (by the tech crew, strangely enough), but not before losing one crew member to some kind of creature. (This is the Coward character, sent off to investigate alone by the Major Asshole character.) 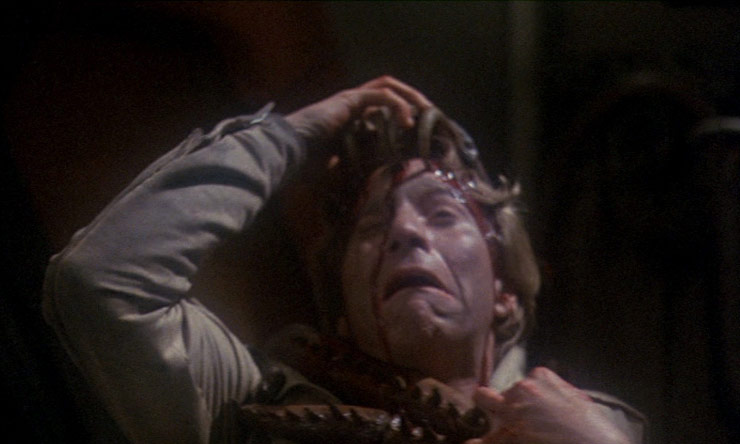 The first reaction of the crew is the most intelligent one – let’s get the hell out of here! But of course the force that brought them down is still active, so they must try to shut it down. They eventually find a strange pyramid-type structure and during the investigation each of them faces horrible and violent deaths at the hands of their own worst fears.

This film is of a significantly higher quality than I remembered it being. The set design is actually pretty good – at least partly down to co-production designer James Cameron (LV-426 looks an awful lot like Morganthus.) The cast, which mostly does a decent job, features a bunch of familiar faces including Walston, Erin Moran (Joanie of Joanie Loves Chachi and Happy Days), Sid Haig, Grace Zabriskie (Laura Palmer’s mom from Twin Peaks) and a pre-Freddie Robert Englund. 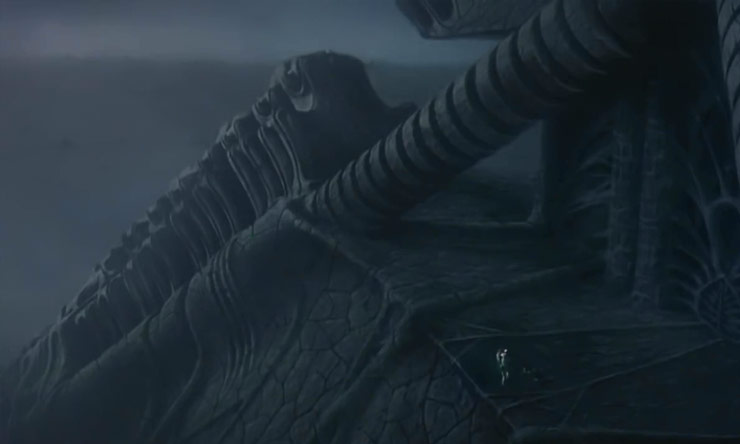 But it’s still a Roger Corman flick and despite its self-seriousness is full of gory set pieces and one incredibly tasteless slug rape scene. 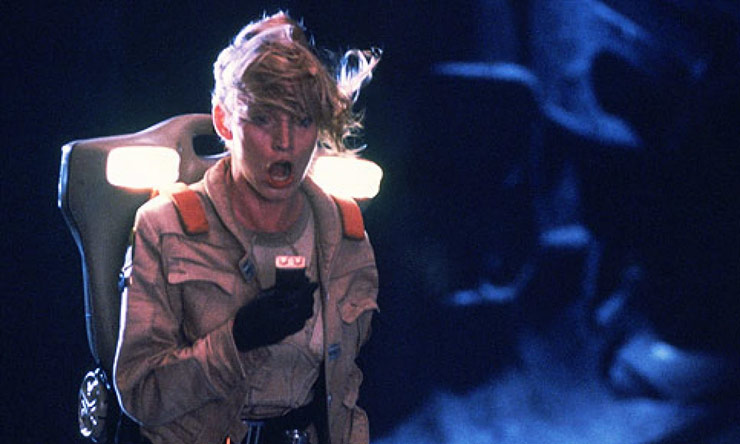 Each of the characters faces some kind of menace that is created out of their own worst fears – or at least that’s what the movie wants us to believe. I’m still not sure what blood sucking fluke monsters have to do with a fear of not being capable of command. In addition to the slug (the character is afraid of both sex and bugs, apparently) we have the warrior who is really, REALLY upset about his crystal weapons shattering (it’s almost like losing a part of himself! Heh.), a claustrophobe who is crushed, a paranoid hothead who gets ambushed, and man whose worst enemy is himself. 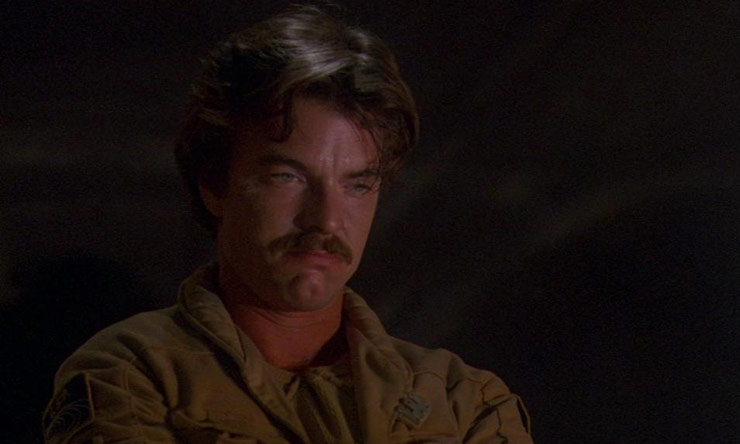 The Bottom Line
This movie is probably always going to be mostly famous for how it influenced Cameron’s Aliens – and there’s nothing in Galaxy of Terror that hasn’t been done before – but it’s full of a sort of low-budget energy and is kind of strangely fun. This is definitely a B movie with pretensions but accepted on that level it’s an enjoyable ride.