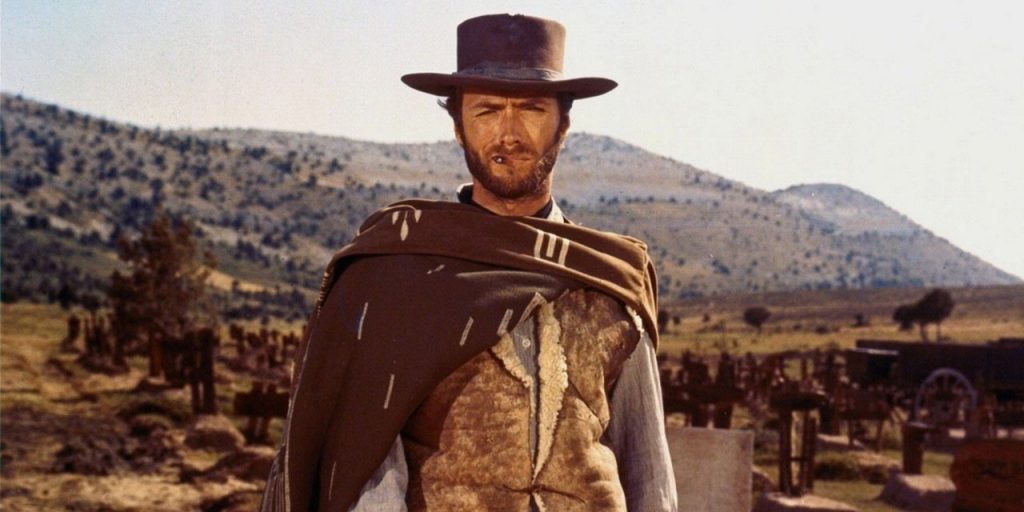 Capping off Sergio Leone’s loosely related Dollars trilogy, The Good, the Bad and the Ugly is probably the most well known western ever made. Set during the chaos of the American civil war, the story follows two men, Blondie (Clint Eastwood) and Tuco (Eli Wallach). Together they form an uneasy alliance whilst hunting for treasure, at the same time trying to outwit the evil Angel Eyes (Lee Van Cleef), an outlaw attempting to claim the riches for himself.

What The Good, the Bad and the Ugly Means to Us

There are a select number of films that have become so synonymous with a genre, that they’re the first used as an example of the best that genre has to offer. The Good, the Bad and the Ugly didn’t just set the gold standard for spaghetti westerns, it is spaghetti westerns. Much like how the companies behind Kleenex and Band-Aid dominated their respected products so thoroughly, that they themselves became the official name of facial tissue and adhesive strips for all time, Sergio Leone’s masterpiece became and still is, the film most associated with spaghetti westerns. And it could be argued westerns, period.

But unlike other films that hit a similar level of unparalleled level of popularity, it didn’t become iconic simply by being first; It earned it by being the best. Leone’s direction was never better, Morricone never made a better score, Eastwood was never more badass, Wallach unfortunately never got a role as great (which makes his performance in this all the more special), Van Cleef is at his most Van Cleef-y and more importantly, it opened up a world of cinematic treasures I most likely would’ve avoided if not for this film. This was my gateway into westerns and that, more than anything else (well, besides the score), is why it will forever hold a special place in my heart. It’s one of my favorite movies that just happens to also be one of the best movies ever made.

Westerns are not really my bag but it’s hard to overlook the best of the best from any genre and Sergio Leone’s spaghetti western masterpiece is just that. I know for a whole generation John Wayne was the typical cowboy that would pop up in the mind of many people but for me, it was the Man with No Name. When I thought about cowboys or played cowboys and Indians as a kid (it was the 80s and I’m not apologizing), Clint Eastwood was who I imitated. Hat, poncho, cigarillos, and the voice. It was all the Man with No Name.

The Mexican Standoff is the most talked-about scene and for good reason. It took me years to realize that Quentin Tarantino utilized this in two of my favorite movies, True Romance and Reservoir Dogs. Those scenes took on a whole other level once I went back rewatched the classic scene from The Good, The Bad and The Ugly. It gave me a deeper appreciation for films I already love and the realization of where it was best utilized.

Sergio Leone’s classic inspired a generation of filmmakers and for that I am thankful. It is a movie so iconic that people who haven’t ever watched it, know of it in some capacity. Whether it’s the sun-soaked scenery, the image of the Man with No Name, the standoff, or the incredible score, this film is etched in our minds. 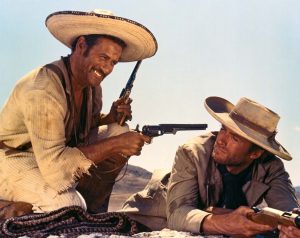 In Simple terms, spaghetti westerns are westerns that are produced and directed by Italians. Usually shot in Italy or Spain, the spaghetti part of the term was initially used in a derogatory way by critics who viewed them as inferior to the traditional westerns made and set in America. Most early releases from the genre were made with low budgets and in some cases, it’s understandable why they were derided. Yet more often than not they managed to be exciting and innovative. A big turning point for the genre came with the release of Sergio Leone’s A Fistful of Dollars, the first film in the Dollars trilogy. Despite the initial negative reviews from critics, its popularity began to spread and it became an international hit, allowing the genre to expand. Leone’s films are undeniably stylish, featuring epic wide shots, and trademark close-ups that focus on the eyes of his characters.

One of the main themes that separate spaghetti westerns from the more traditional product is doing away with the idea of a simple good vs. evil. There is no John Wayne on the frontier looking after damsels in distress and fighting the ‘bad guys’. The spaghetti variety is more interested in looking at the real world. How it is unmistakably more complicated than good and evil, and how the western world is one of kill or be killed. As Italian director Ferdinando Baldi stated

The violence in our movies is more gratuitous than in the American films. There was very little morality because often the protagonist was a bad guy.

Although not the first movies of the genre, Leone redefined it with his Dollars Trilogy. Eastwood’s character is essentially a violent killer out to collect a bounty and make a profit. Behind his legendary stony stare is a very dubious morality. Getting down to a micro level, he’s always smoking cigars and is never clean-shaven. The Man With No Name is not a hero, but an antihero.

The film encountered a multitude of problems, from issues in pre-production to near-death experiences on set. First off, the leading line up could have looked very different. Clint Eastwood wasn’t keen on returning for a third film and needed a lot of persuasion. Leone and his wife personally traveled to California to try and talk him around. A bumper payday of $250,000 and 10% of the profits in North America eventually convinced him. Much to Leone’s annoyance. Leone was also keen on getting Charles Bronson to play the part of Angel Eyes, but he had prior engagements.  Lee Van Cleef (who went on to fill the role) had previously played a likable character in For a Few Dollars More so Leone wasn’t initially keen on the idea of him playing the sadistic ‘Bad’ of the film. Thankfully he reconsidered and it worked out for the best.

When the production got to the filming stage there were quite a few notable incidents. Eli Wallach nearly poisoned himself when he accidentally drank from a bottle of acid that a film technician had set next to his soda bottle. Wallach was critical of Leone in his autobiography, saying he was too relaxed when it came to ensuring the safety of his actors. During one scene, where he was to be hanged after a pistol was fired, the horse underneath him was supposed to bolt. The horse did indeed bolt and the rope severed. Unfortunately, the horse went into a dead gallop for around a mile, with Wallach on its back, hands still tied. Perhaps the most worrying incident was during a scene in which Tuco escapes Union captivity, cutting his handcuffs by placing them under a moving train. Leone wanted to make sure the audience saw Wallach himself, and not a stuntman lying beside the train as it sped by. Wallach agreed, then realized after the first take finished that a metal step on one of the train cars had missed his head by inches. 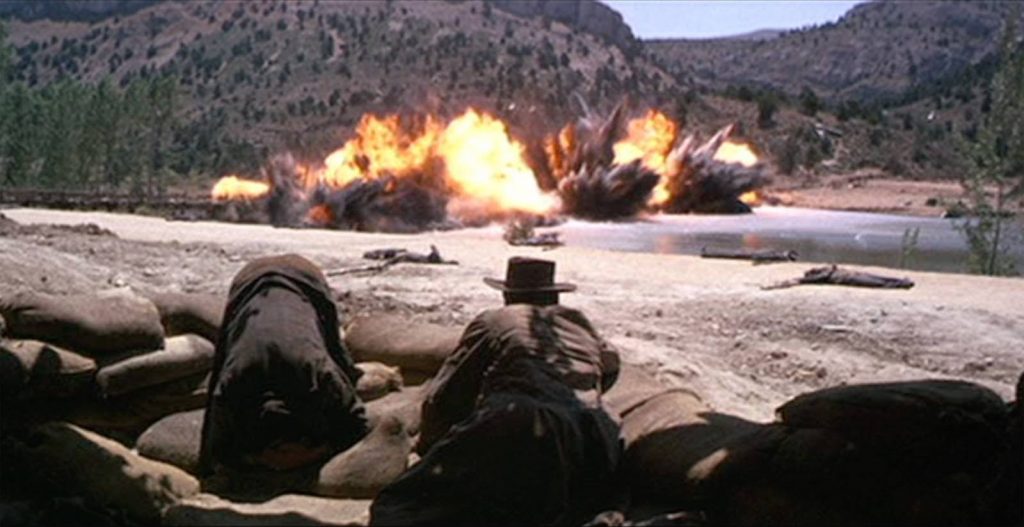 Another dramatic (and costly) incident occurred during the scene in which Blondie and Tuco decide to blow up a bridge that leads to the cemetery where the gold they are looking for is buried. The signal the crew came up with to instigate the blowing up of the bridge was the word “Vaya,”(go in English). Unfortunately, while a member of the crew was trying to hurry a cameraman along, he shouted “Vaya” at him. The person in charge of the explosives heard the shout and blew up the bridge. It had to be rebuilt from scratch for take two.

The score for The Good, The Bad and the Ugly was composed by the late great Ennio Morricone, a frequent Leone collaborator. One of the best-known songs kicks in as the film approaches its finale, just as Tuco enters the graveyard in a frantic search for gold. Fittingly titled, The Ecstacy of Gold. Since the films release the song has become a pop-culture staple. It’s an uplifting and invigorating piece of music that’s been used by many people to do just that. Uplift and invigorate. Metallica frequently play it before they come out on stage to get the blood of their fans pumping and it has been used in numerous television adverts throughout the years.

The film wasn’t actually scored in the post-production stage. Instead, Leone and Morricone worked on themes together before shooting even started. They wanted the music to inspire the film rather than the other way round. Leone was even known to play the music on set and that’s one of the reasons he rarely shot his scenes with synchronized sound, and why the actors are dubbing. He thought that by playing Morricone’s music over a scene, it would help get the most out of the actors by getting them in the mood. If ever a piece of music has truly elevated a scene, this is it. It still gives me goosebumps every time.

Despite the initial negative reception by some critics, the film went on to legendary status, featuring in pretty much any list of best films ever made. Quentin Tarantino has called it the best-directed film of all time and in even bigger flattery said it was the greatest achievement in the history of cinema. Stephen King said the film was a primary influence for his Dark Tower series, with Eastwood’s character inspiring the creation of King’s protagonist, Roland Deschain. The film’s title is even used in popular culture when describing something thoroughly. Its legacy and influence is clear to see and runs much deeper than just the world of film.

What are your fond memories of The Good, the Bad and the Ugly? Do you have a fun fact or piece of trivia on the film? Share it in the comments below!