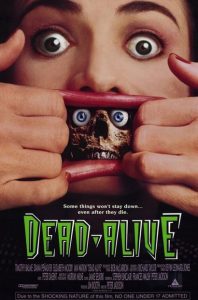 Plot: A young man’s mother is bitten by a Sumatran rat-monkey. She gets sick and dies, at which time she comes back to life, killing and eating dogs, nurses, friends, and neighbors.

Sex and Violence: No sex but more blood than any other film in history