Smell that? That’s brand new Wasteland smell–all smoke, rot, and ammonia. The wind brings the sound of rusted metal creaking and the baying of feral dogs. The sun is hotter than it should be and moves way too fast across a sky so dark blue it’s almost black. Your breathing is too loud in the respirator. There’s sand everywhere. Oh yeah. This is the place.

But to get a wasteland, to be POST-apocalyptic, you have to have an apocalypse in the first place. So in honor of the launch of Screen Age Wasteland I’m devoting the first few installments of Fear Flashback to the end of the world. Specifically, to John Carpenter’s Apocalypse Trilogy. The Thing, Prince of Darkness, and In the Mouth of Madness.

So tighten the straps on your glare-reduction goggles, and make yourself comfortable. The end has to start somewhere, right? Might as well be here. 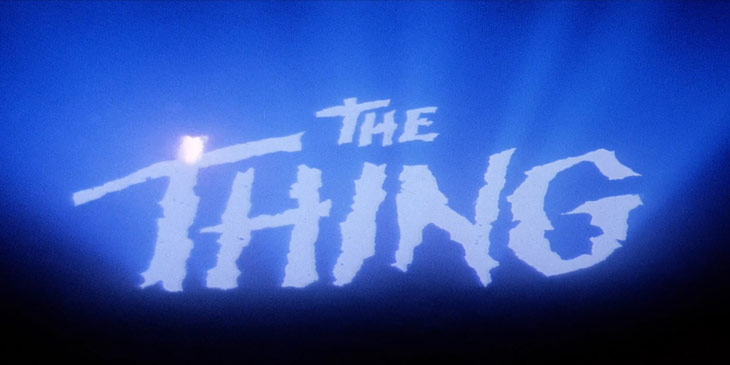 John Carpenter’s remake of The Thing From Another World is constantly in my top 10 movies list. Honestly, it rarely moves out of the top 5 and is usually fighting for the top spot with Bride of Frankenstein. It’s one of those movies that’s become almost comfort food, a movie I can pop in at any time and enjoy. I watch it at least once a year–usually in the winter–when the cold, isolation, and snow can really set the mood. (I understand it’s a yearly tradition at the Amundsen-Scott South Pole station as well.)

My interest in The Thing goes back to 1976 and a comic book series called Starstream. Whitman, an imprint of Western Publishing, decided to take advantage of the burgeoning interest in science fiction by publishing adaptations of some classic sci-fi stories. My grandparents were big Star Trek fans and I’m fairly sure the issues of Starstream I ended up with were probably gifts from them (as were some of the great Gold Key Star Trek compendiums).

Anyway, the very first issue had an adaptation of the classic John W. Campbell story “Who Goes There?” With art by Jack Abel, the adaptation was better than average and the monster, with those tentacles and three glowing red eyes, really made an impression on my young self. You can take a look at the adaptation yourself at Diversions of the Groovy Kind.

I was made aware of John Carpenter’s adaptation the same way I found out about most horror movies in the late 1970’s and early 1980’s, via my friend John’s occasional Fangoria issues. Rob Bottin’s nightmarish special effects lived in the space behind my eyelids for a long time before I got to see the finished product on a screen. The effect of the two heads melding together made a particular impression. 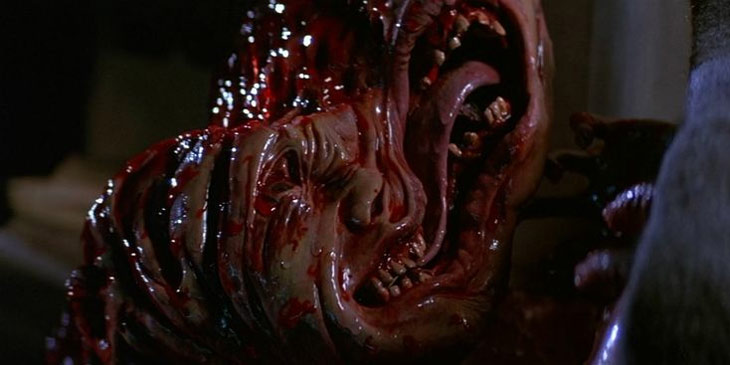 I must have first seen the movie on HBO, as  the gore was not in any way expurgated. I distinctly remember the first time I saw the scene with Wilford Brimley digging his bloody gloved hands into what had once been a dog, peeling away layers like stripping a snowsuit off a sweaty fat kid. I was grossed out and fascinated at the same time.

Once it was released on VHS it became a regular viewing staple with both my family and friends, forming one of a trilogy of movies we called “blue light movies” because of the predominant blue tone to them. (The others were Terminator and Aliens). It was a go-to rental if nothing else was tickling our fancy.

It’s also one of the few gory horror movies that my wife likes. Her tastes run closer to The Sound of Music and Pride & Prejudice–period dramas and romances, generally. However, she will occasionally surprise me with her enjoyment of things more … well, gory. She loves Night of the Living Dead, for instance. And she loves The Thing. Yeah, she’s a keeper.

The Medium
I own The Thing on Blu-ray, but my preferred viewing experience is actually the HD-DVD version. Yes, I’m one of those fools. I have an HD-DVD player that was actually an XBOX 360 peripheral, and I got it pretty darn cheap. So, yeah, I have The Thing on HD-DVD. It looks great and has a ton of extras. The Fear Factory Blu-ray release is excellent, I just like the HD-DVD better.

The Movie
A group of men stationed at a remote research base in Antarctica find themselves assaulted by a group of Norwegians who are chasing a sled dog across the ice. The Norwegians are killed and the dog is assimilated into camp while a pilot, MacReady (Kurt Russel), and a doctor, Copper (Richard Dysart), go to the Norwegian base to find out what happened and offer help if they can. They find the base burned to the ground and all the scientists dead. 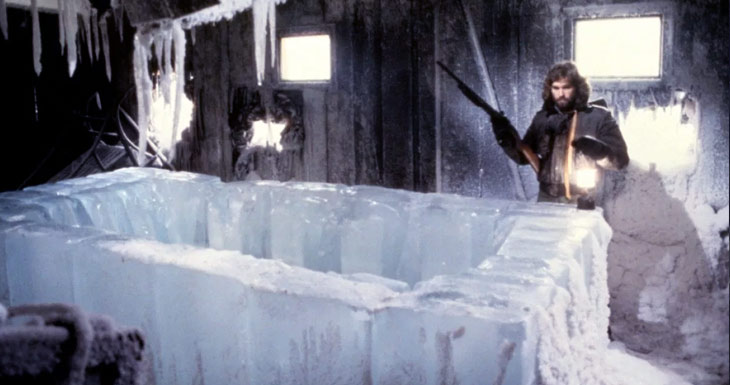 Returning from the camp with video tapes, papers, and a bizarre half-burned corpse, the men learn that the Norwegians found a spaceship buried in the ice, as well as something else.

Unfortunately for them, this something else is a creature from another world. A creature that can look and act exactly like any living thing. And it’s already been in their camp for hours….

For me, this is Carpenter’s best movie. By a mile. I enjoy a lot of his films, but this one feels like it’s the most realized, the most complete. It was his first studio movie, and I think the budget and schedule really allowed him to do his best work. He had 3 months for principal photography alone–compare that to just 30 days for Prince of Darkness.

Everything just clicks. The cinematography is excellent and Carpenter’s use of a roaming camera for interior shots emphasizes the claustrophobia. The music is by Ennio Morricone, one of the rare times Carpenter didn’t score a film himself. It’s full of moody, downbeat moments and Carpenter-esque electronic notes.  It’s one of the few film soundtracks I own. The acting is uniformly excellent, each character given enough moments to sketch them out without being caricatures or fading into the background (an issue I had with the 2011 prequel). 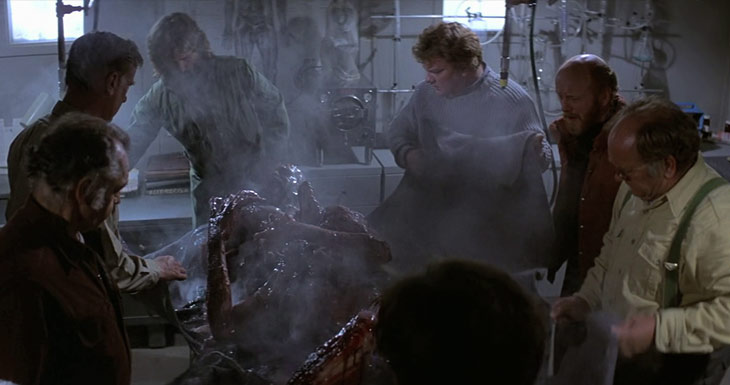 And of course the special effects are amazing–even now they stand out as inventive, believable (for the most part), and stomach churning. The effects are probably part of the reason for the lukewarm reception the film received upon release; they’re a little too realistic. Now, with shows like The Walking Dead giving us regular headshots and dismemberments, they don’t seem so bad, but at the time people must have felt like they were being punched in the gut. 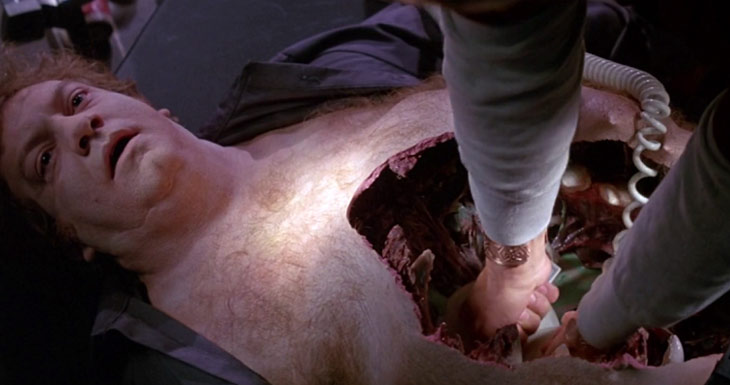 The biggest part of the movie for me, the reason I keep coming back to it, is the sense of creeping paranoia. None of us know–really know–what another person is thinking. We’re all locked inside our skulls. That leads to plenty of misunderstandings and paranoia even when we know the other people we’re with are human. Add the possibility that one or more of the people in your group is a monster, a monster that can take you over as well? Those screws get turned pretty fast and pretty tight.

The creepiest moment in the entire film is the moment when Mac goes to the storage shed to ask Blair–a man who realized before anyone else the danger they were all in–if he’s seen a missing man. Blair has been isolated from the others after an outburst where he destroyed the copter controls and the radio to prevent the Thing from making it to the mainland. Blair, played extremely well by Wilford Brimley, asserts that “it’s not Fuchs.” And then: “I’m all right now. I want to come back inside.”

And you know he’s not Blair any more. 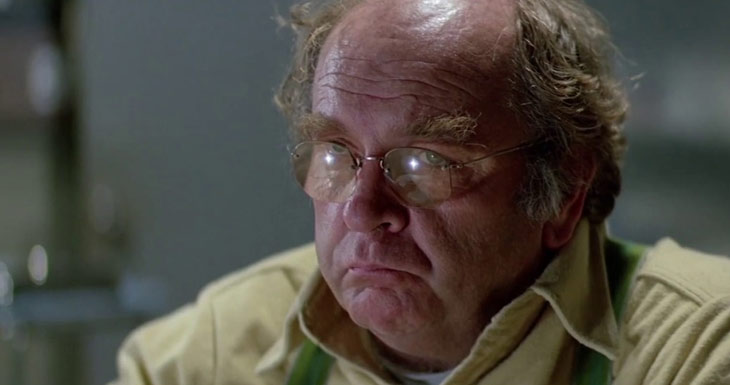 The movie was dinged at the time for its bleak, nihilistic ending. Two characters sit in the ruins of the camp as the fires begin to die. Either of them could be the Thing. Or neither. Fade to black. I think it’s genius, as even at the very end we still don’t know–did they win? Or will there be something left to make it back to the mainland when the rescue team arrives in the spring? There’s no release from the paranoia for us.

The Bottom Line
How much do I love John Carpenter’s The Thing? As a useless theater student, I once tried to adapt it as a stage play. I even worked out the fire effects for theater in the round. I never got around to showing it to anyone, and that’s probably for the best. Hey, at least it wasn’t a musical.

I actually find it difficult to write anything about the film in detail. It’s such a part of my internal film landscape that I don’t think of it in concrete terms any more. It’s all about mood and visuals and music. And that creepy feeling that comes upon me sometimes when I’m walking the aisles at WalMart, looking at the people passing by. If they were imitations– perfect imitations–how would I know?