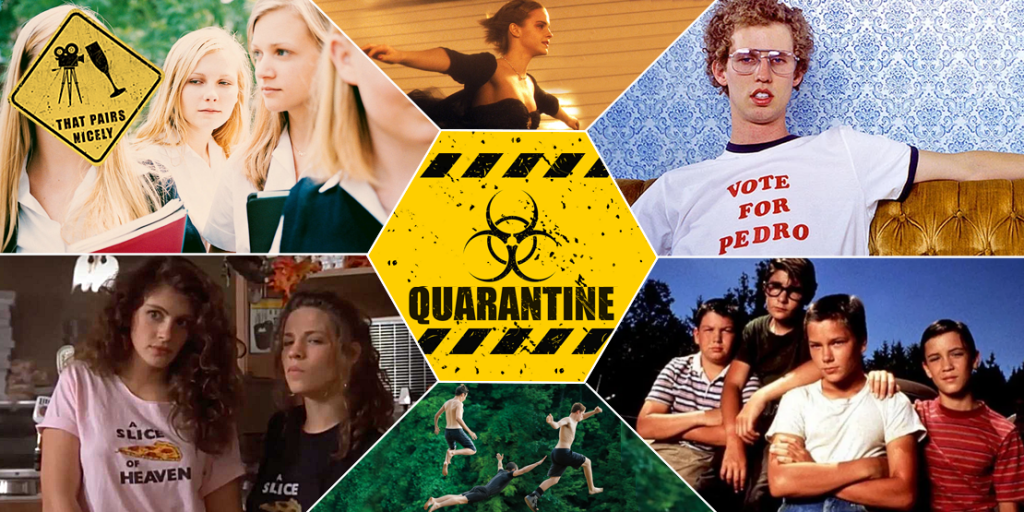 Here at ScreenAge Wasteland, we’ve selected six films that you should watch during quarantine if you’re in the mood to see characters deal with the hardships associated with coming-of-age!

Stand by Me | Billy Dhalgren

Stand by Me kind of depresses me. Because it reminds me of a time when kids were free to explore the outdoors, when boys could act like boys, and when coming-of-age meant having the autonomy to make bad decisions and learn from them and actually … come of age. Kids Gordie, Chris, Teddy, and Vern’s age nowadays don’t even hang out with their friends, much less go on unsupervised adventures with them. If it can’t be done through social media or in the virtual world of an online video game, that shit ain’t happening.

Covid might just be the catalyst to change this trend, though. I’ve seen more people doing all sorts of activities outside than I normally do. Playing catch, running, biking, walking, having picnics.

So watch Stand by Me. Watch it with your kids. And then send their little asses outside. Even the backyard is a huge improvement on that little screen they all live in normally.

The classic. The ever-quotable. I shouldn’t have to go in too deep about the greatness that is Napoleon Dynamite, should I? This movie feels like it was made for a very specific audience. Director Jared Hess had no idea how big that audience actually would turn out to be. Napoleon Dynamite is rightfully remembered for its one-liners and the ridiculous situations our protagonist finds himself in. What I feel is most missed is the underlying theme of the movie: be unapologetically you. When assholes kick you in the tots, get even by staying true to yourself. Find your sweet set of skills, whatever they may be. Work hard to master your craft and always be there for your friends.

In the fishing town of Mystic, Connecticut, three young women come of age one summer while working in a local pizzeria. Jojo gets cold feet and faints at the altar as she is about to marry her longtime boyfriend. Daisy feels as though she’s outgrown her small hometown and dreams of something more, while still feeling inadequate next to her younger sister Kat, a recent graduate who is working multiple jobs in order to afford her ivy league school. Jojo, Daisy, and Kat experience highs and lows, especially with the men in their lives, but director Donald Petrie does a wonderful job of balancing the story arcs of all three women while maintaining their connection to one another. It’s a moving, genuine story about the bonds of friendship, especially as people grow up and begin to live their lives apart from one another.

Not every coming of age story finds a friendly resolution. That’s precisely why Sofia Coppola’s freshman feature remains disturbingly poignant and shatteringly silent in its lethal cuts. The Virgin Suicides is not your average coming of age narrative simply because the awakening and discovery of self are rendered scandalous, and, ultimately, eradicated from ever finding the light of day. Strict, fundamentalist religion is a hell of a thing.

In the thick of 1970’s suburbia, five attractive teenage sisters struggle under the thick, dreary cloud of overprotective, dangerously naive parents. Told through the eyes of a group of neighborhood boys who have grown fond of the sisters and their stifling situation, we follow the girls through the quietly visceral struggle of simply desiring desire; to be seen; to feel; and to laugh a time or two because, you know, they’re teenagers. What could easily have become a paint-by-numbers loud and pound sort of trope is traded-in, rather, for the subtle touch of Coppola. Through faded, photographic shots, intentional needle drops, quiet devastation, and hollow eyes is a slow-burn of a film that never packs that grand “wallop” or speech or “moment”.

Instead, it guts you in the worst way possible–with utter, boring believability. Kirsten Dunst, post-kid roles but pre-teen sensation era, shows early signs of becoming one of Hollywood’s modern marvels as the titular Lux Lisbon entangled with the young, hunky Josh Hartnett. Also, as the title would suggest, the peak of it all delivers in staggering fashion. The Virgin Suicides isn’t the John Hughes pick, nor does it scratch the stratosphere of raunchy 90s lore. Much more akin to Dazed and Confused, but with a lot more depression, this one is a case-study in tender, but heartbreaking filmmaking. And captures high school life with pretty vivid authenticity.

The Perks of Being a Wallflower | Vincent Kane

“Coming of age” movies are pretty hit or miss with me. So many are filled with the same cliches or tropes that seem to be just checking every box of the genre until the movie ends. The Perks of Being a Wallflower felt just like that to me at first. Sure it had some personable performances from Emma Watson and Ezra Miller who bond with the weird quiet freshman who is just trying to fit in. There is the drugs, the sex, the parties, the bullies, and everything else you could predict in this movie until the film hits on some deeper and darker issues. There is so much more to this movie than just trying to make friends, avoiding bullies, and working on getting the girl that I found myself wrapped up in an authentic high school experience that most films would rather avoid. It has an incredible soundtrack that features David Bowie (which always a win) and shows some love to The Rocky Horror Picture Show (which is always a win as well). The film seems geared toward the awkward outcasts of high school but is easily something anyone can relate too.

The Kings of Summer | Sailor Monsoon

It’s ironic that the decade that produced some of the best-written teen comedies, always gets overlooked for its contributions to the genre. John Hughes cast such a large shadow, that the decade that produced them became synonymous with the genre. When you think teen comedies, you think the 80s. And I’d argue, the 2010s had films that were just as good as anything from that decade. Obviously not as iconic but just as smartly written. But for some reason, none of them clicked with moviegoers. There was the occasional hit (Lady Bird, Easy A, Booksmart) but by and large, audiences just didn’t care about adolescent problems.

Which meant gems like The Kings of Summer got sorely overlooked. A rarity in the genre, The Kings of Summer is a coming of age flick that doesn’t star a girl, is legitimately funny without ever resorting to crass, gross-out humor and has adult characters that aren’t used as out of touch punchlines or villains. No one is chasing tail, no one is dying of cancer or some other sad disease and no one is trying to get a date for the prom. It’s just about a couple of teenage boys and their desire to live like kings in a forest. The film also includes my favorite character of the last ten years (Biaggio) and my favorite soundtrack. The Kings of Summer is not the best teen comedy of the decade nor is it the most overlooked but it might be the most entertaining.

What are some coming-of-age movies that you have watched recently?