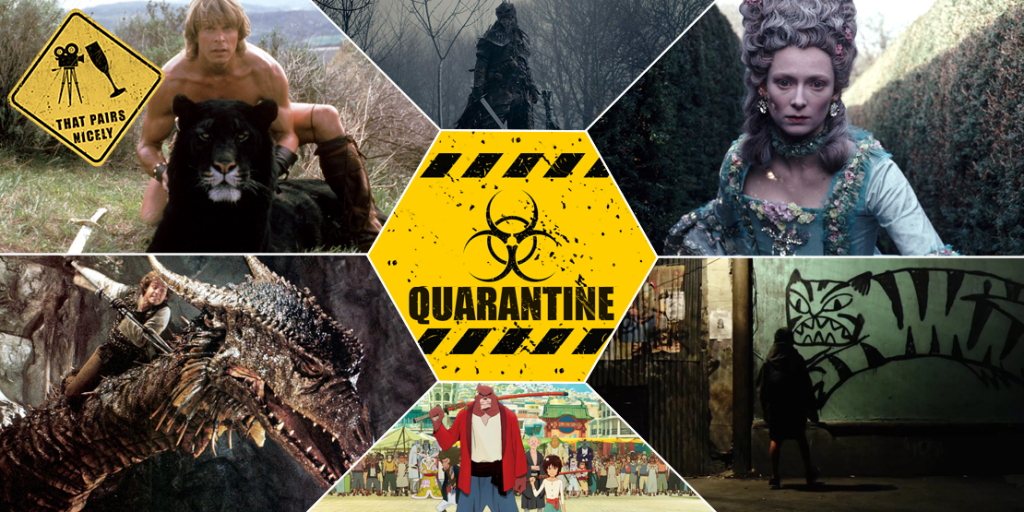 Here at ScreenAge Wasteland, we’ve selected six films that you should watch during quarantine if you want to be swept into a fantasy.

This was the epitome of a movie that was on a channel like TBS or HBO regularly when I was a kid, and I would sit down to watch it every time I saw it was on. It is a pure fun time-waster that had all the elements of a PG-rated fantasy sword and sorcery adventure a young male could want. A cool hero who could kick ass and talk to animals. Half-naked Tanya Roberts. An evil Rip Torn. Boobs. Sword fights. Magic. More boobs. I mean, what more do you want? It feels like a trip back to a forgotten time when movies like this were coming out on the regular and a genre that is sorely missed today.

There are no elves or barbarians in loincloths or women in chain mail bikinis in Orlando. There are no giant animatronic snakes, no dragons, no sword fights, no blood and guts. I love all of those things, but that’s not the kind of fantasy Orlando trades in.

Based on the 1928 novel by Virginia Woolf, Orlando tells the story of an English nobleman who is given the gift of immortality by Queen Elizabeth I in the year 1603. He eventually becomes a she, goes on to have a daughter, and lives on into the modern era.

Orlando is the kind of movie that sticks with you days after you’ve seen it. But what’s it all about? Watch it and decide for yourself.

2019’s The Head Hunter may be the closest thing we ever get to a live-action Skyrim movie. This testosterone filled horror checks all the boxes for a good time if you love monsters, slayers, and stories about revenge. This follows a father (Christopher Rygh) who is dead set on avenging the death of his daughter, killed by a mysterious monster. Rygh does an excellent job in a movie where he may say 100 words but is required to deliver so much emotionally. The movie is not without its flaws. I truly feel like it was held back by the budget. For $30,000 it accomplishes so much that a lot of blockbusters could never. It just leaves you wanting more when our hero kills a variety of monsters off screen. Regardless, the visuals we do see are nothing short of stunning. The location could not have been more ideal for this story. I know I will be the first in line to see the next Christopher Rygh movie.

Everyone has their first dragon. Whether it’s Smaug from the Hobbit films, Maleficent from Sleeping Beauty, Toothless from How to Train your Dragon or even Haku from Spirited Away – there’s always one cinematic creature that defines what a dragon is for you. For me, that creature was Vermithrax Pejorative, the antagonist (along with the usual array of human foes) of the Disney/Paramount film Dragonslayer. Yes, the movie as a whole is a great fantasy film – a darker, grimier film than you  would expect from Disney, looking and feeling a bit more like the original Conan than something from the House of Mouse.

It’s the dragon that compels, however, in part because the hero is just so… there. He doesn’t really have much of an arc. Peter MacNicol is fine, it’s just the part he’s playing isn’t that deep. I’m way more interested in the girl-passing-as-a-man character of Valerian, but it’s an 80’s movie so she doesn’t get to do much. A good screenplay by Hal Barwood and Mathew Robbins keeps things moving and a great score by Alex North keeps the blood pumping, but all other aspects pale in comparison to the flying, fire-breathing, virgin-munching Vermithrax who is 400 years old and looks like she resents every damn year. With effects by Phil Tippet and the ILM crew, the dragon still looks great and terrifies every time she’s on screen. It’s on Disney+ right now, so go take a look!

The Boy and the Beast | D. N. Williams

If you’re looking for a spectacularly animated, colourful fantasy adventure, look no further than Mamoru Hosoda’s The Boy and the Beast. Leap-frogging between our world and a mystical one parallel to it, The Boy and the Beast takes you on the incredible adventure of Ren, a boy who has lost everything. Found roaming the streets of Tokyo, Ren is taken under the wing of Kumatetsu — a creature who, if he can successfully train a young disciple, could rule the Beast Kingdom.

The dynamic between irritable trainer Kumatetsu and the often sullen Ren is crazy amounts of fun, as is seeing the many ways in which our world and the Beast Kingdom collide. A must-see for fans of traditional animation.

Tigers Are Not Afraid | Lee McCutcheon

I’ve always preferred my fantasy movies with more than a tinge of darkness lurking in the background. The likes of The Devil’s Backbone or Pan’s Labyrinth. Tigers Are Not Afraid is a dark fairy tale that fits the bill perfectly. Praised by the master of fantasy himself Guillermo del Toro, it takes a look at the lives of five young children living on the streets of a Mexican city that has been devastated by drug cartels. All the while the main character Estrella is working on a fairy tale writing assignment given to her at school. As the plot progresses the lines between fantasy and real-life horrors begin to become blurred. Think City of God crossed with del Toros best work and you’ll know what to expect in this beautiful but extremely bleak, under-appreciated gem.

What fantasy movies have you recently watched?