Sequels represent the best and worst of Hollywood. The good ones revitalize tired franchises and add new chapters to stories we already love and the bad ones serve no other purpose than to milk a few more cents out of an already dead cow. Good or bad, they’re an inevitability. Hollywood always has been and will always be a business, with sequels being their bread and butter. This list examines both the bread and the butter, or in other words, the follow-ups that put the emphasis on both the former and the latter of the word. 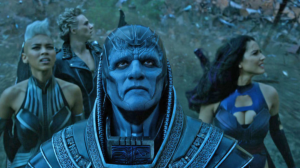 Maybe this franchise is just doomed to have bad part 3 entries. The Last Stand circled this list for a while, but I can ultimately forgive it for the hand that was dealt to Brett Ratner with all the behind the camera issues. However, with Apocalypse, they had everything going to make this a grand film. First Class and Days of Future Past were universally loved and critically praised even despite DOFP having Halle Berry’s Storm in it.

What was the issue? I think it comes down to two things really. 1) The big bad that pretty much all of us had been waiting for to show up in this franchise was simply a dud. He wasn’t intimidating and not the Apocalypse we had all hoped for. This was just a waste of talent for someone like Oscar Isaac. 2) The foundation of the first two films and essentially this whole franchise was the characters. Apocalypse fell into the sequel trap of grand effects and explosions and yada yada. It took focus off the character driven narrative outside the scene that turned Magneto bad again, only to have him redeemed yet again for him to eventually turn back to bad in future films, right? Only for him to be redeemed in the future future. Just a letdown altogether. 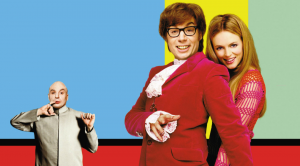 A strong contender for the best movie annoying people killed through overuse of quotes. Unfunny people flocked to this movie like fat kids on cake, damn near ruining it with their incessant need to quote it, Borat and the Sixth Sense to death. You’re horny, you see dead people and you have a wife. I get it. It wasn’t funny the first time and it sure as hell wasn’t funny the 174378 time. Thankfully, enough time has passed that all the people who were obsessed with this are now dead, leaving a real comedy gem for the rest of us to enjoy without the fear of anyone quoting it back at us. The film rehashes gags and plot elements from the first one but the additional characters are fun (Mini Me and Fat Bastard), the time travel plot is entertaining and Dr. Evil’s subplot with his son (played by Seth Green) is great. It’s groovy baby, yeah! 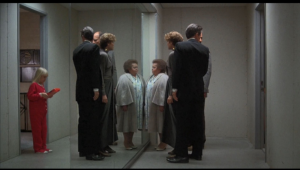 Does anyone even remember this film? The original is considered one of the best horror films with memorable scenes, characters, quotes and a nasty clown doll. The sequel didn’t live up the original, but at least had creepster Kane that most remember and delivered some chills. This third entry was simply dreadful (not in a good way) and pointless. Sadly, this movie is most remembered for the stars, Heather O’Rourke, untimely death during post-production.

The cinematic equivalent of juggling chainsaws blindfolded while on a tight rope suspended above a shark infested pool, Avengers: Infinity War had the nigh impossible task of taking damn near all of their characters, putting them in a movie together and then making it work. And somehow, it does. Each character, while not all getting a scene stealing cameo ala Spider-Man in Civil War, get enough to do to not feel short changed. The film is long but you never feel it due to the energetic pace, and Thanos, the main baddie they’ve been building to for over a decade at that point, is given unexpected emotional pathos that depends his motivations and makes him a strong contender for the best villain in the MCU. Everything about this film works, which in turn, makes it even more incredible. It’s like a perpetual motion machine of awesome. 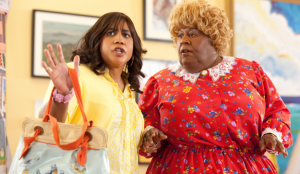 So, I can somewhat (not really) understand why the first one was made back in 2000 when comedians dressing up in fat suits was all the rage, but how in the bloody hell does it get two sequels? As if it wasn’t bad enough to have unfunny Martin Lawrence dress up as Big Momma for a third time, but how about we add Alpa Chino in a fat suit as well! That’s the ticket. The clichés were played out in the first one, so you can only imagine how dreadful they are here as this is simply a retread of everything already not funny in the first two movies. I’m surprised we haven’t had a Big Momma vs Madea movie yet. 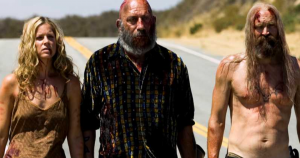 Riding the line between loving homage and halfassed pastiche, Rob Zombie’s House of 1000 Corpses is a cinematic regurgitation of influences. It’s a hyper stylized love letter to horror written by a deranged stalker who’s been slapped with a court order to stay at least 100 feet away from good filmmaking. It’s loud and messy and unpleasant to look at. It’s exactly the kind of movie a rockstar who writes songs that play at shitty strip clubs would make. Which makes its sequel all the more impressive. If House of 1000 Corpses was Zombie’s riff on the Texas Chainsaw Massacre 2, the Devil’s Rejects is his attempt to one up the original. Doing away with all the unnecessary elements that bogged down the first film, the sequel is a bare bones thriller that stars an amazing cast of character actors and has a Tarantino level soundtrack. It’s mean and nasty and unpleasant to look at but unlike the last film, it’s supposed to be. It’s a grindhouse masterpiece that stands toe to toe with the best of the genre.

I personally have never seen this inexplicable travesty of a movie. Every list and article has this in the top of the all-time worst sequels and movies in general. It is darn near impossible to find anything positive out there about Superbabies. Even kids don’t like this movie. “Excruciating”, “Exhausting”, “has no redeeming qualities” are just some of the quotes I read while researching this film. So, I know what you are asking, “why is it so low on this list then?!” Valid question but I’ll answer your question with a question. What the hell did you expect from a sequel to a movie called Baby Geniuses? Horrid sequels to awful previous films shouldn’t be alarming. If you went into this movie with any expectations other than abject disdain, then that’s on you. 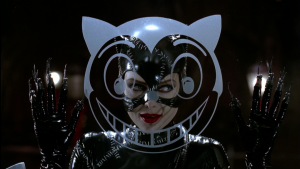 Tim Burton had a hard mountain to climb making the first Batman — fans petitioned to have him fired and the lead replaced, public interest in the character was pretty much nill since the the campy 60’s TV show was still fresh in everyone’s minds and the last two abysmal Superman sequels had already poisoned the well before he got there — but now, he was beset with a whole new set of challenges. Namely, how to top Jack Nicholson’s iconic portrayal of the Joker. The answer: with not one but 3 new villains. The seductive and dangerous Catwoman (Michelle Pfeiffer), the monstrous Penguin (Danny DeVito) and the corrupt businessmen Max Shreck (Christopher Walken). Generally, having multiple villains in a single movie is a sure sign that a film will suck but Batman Returns is one of the few instances where it works. Oh and the film ends with Batman fighting an army of rocket wielding penguins, which might be the most ridiculously fun comic book movie moment ever. 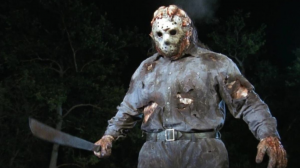 (Deep breath) This entry hurts probably more than any other movie on this list. Give me a minute…Okay…Anyone who knows me, knows my affection for this franchise and the big lug behind the mask. I can honestly say I love every film in the franchise and can argue their merits to the death. Even though I can point out some aspects of JGTH that I like, this is the one exception of this franchise that I simply can not defend. I even hold personal animosity toward this entry because it was the first Friday the 13 film I was able to see in the theater. 12-year-old Vinny Kane was as pumped as one could be for a movie. This was the movie event of my young life, and it was an utter disappointment.

If you are watching the 9th installment of the F13 franchise you are pretty much there for one reason and one reason alone. That’s to see Jason kill fools in cool and gruesome ways. We get a fantastic opening scene where Jason, who looks bad ass by the way, is tricked into a trap with a SWAT force just waiting to blow him away. They do (spoiler alert) and we don’t see Jason for almost the entirety of the film… “Are you motherfudging kidding me?!”, young Vinny exclaimed. So, we don’t get to see Jason, and still get the bad acting, terrible dialogue and horrible directing. Creighton Duke is one of the only redeeming factors of this disappointment, but you broke my young horror heart Jason Goes to Hell…You broke my heart. 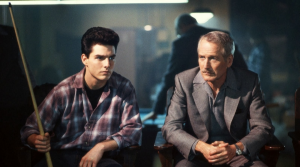 Taking place 25 years after the Hustler, The Color of Money sees Newman’s “Fast Eddie” Felson mentoring a cocksure pool shark played by Tom Cruise. A rare sequel amongst Scorsese’s oeuvre, The Color of Money is as much about pool as Raging Bull is about boxing. Using the sport as a Trojan horse in which to unload bigger ideas, the film is actually about the dichotomy between age vs experience. Felson might be well into his twilight years, but he’s lived the game for so long, it’s all he knows and on the other hand, Cruise’s Lauria is far younger, which brings with it boundless energy and the desire to evolve and try new techniques. It’s fascinating character study mixed with a riveting sports drama. The Color of Money is among a scant number of follow ups released after ten years that’s actually good. So good in fact, it’s better than the original.