The number of films produced within a year, let alone a decade, is staggering and it’s only getting bigger. The podcast 80s All Over—which involved two critics watching and reviewing every major film of the decade, one month at a time—recently ended with about half of the decade getting reviewed. They had to pull the plug on it early because it was just too time consuming for them to track down and review every film on their watchlist. It was just too hard for them and they were doing the 80s, a decade with far fewer films than the 2010s. I only mention them and their podcast to illustrate my point: there are a shit ton of films out there which, for a cinephile, is hell because it’s impossible to see them all. There are hundreds of thousands of movies and if you don’t know where to look, you’re bound to miss some good ones. This list was a collaborative effort to help shine a light on a select few you might not have seen that we think are worth your time. 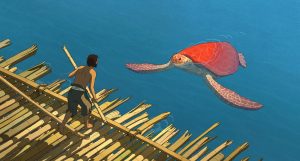 After years of making tremendous shorts (one of which he animated with coffee and the other, the Oscar-winning one, made such an impact on Hayao Miyazaki, that he personally asked de Wit if he could produce his next film) Michael Dudok de Wit finally made a feature-length film and it’s simply wonderful. Entirely dialogue-free and utterly hypnotizing, The Red Turtle is a poetic fable about a man who, while shipwrecked on a deserted island, befriends a red turtle who changes his life. It’s a simple story about mankind’s reliance on nature, the beauty of companionship and the preciousness of life. 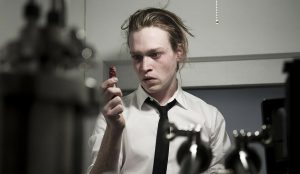 Set in the near future where celebrity obsession has become so all-consuming, that supermarkets carry synthetic meat made from the cells of famous people and where celebrity viruses are as fashionable as designer perfumes, Antiviral is about a man (Caleb Landry Jones) who, in an attempt to sell a superstar virus on the black market, injects himself with the disease and then must quickly find a buyer before it kills him. If imitation is the sincerest form of flattery, David Cronenberg should feel pretty pleased with his son’s feature debut. Brandon Cronenberg perfectly channels the style and gross-out body horror of his father’s best work while also feeling distinctly original. It’s an icky film that feels as eerily prescient as Videodrome and just as satirical. 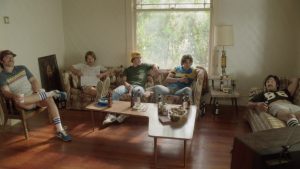 Continuing where Boyhood left off and acting as a spiritual sequel to Dazed and Confused, Everybody Wants Some!! is Linklater’s college film. The plot (if you can call it that) follows a group of guys as they play baseball, drink beers, pull pranks on each other and chase skirts around. That’s about it but if you’ve seen a Linklater film before, you know plot is irrelevant. His films are like improvised jazz sessions; they’re freeform and shit just happens but that’s half the fun. You’re not looking for structure, you’re looking to hang out with some likable characters and the biggest compliment I can give this film, is that it’s as good a hang out film as Dazed and Confused. 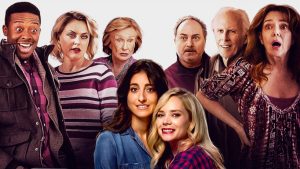 I stumbled across Lez Bomb on Netflix one day last year while at my friend’s place. I threw it out for us to watch thinking that if it was terrible it would at least (hopefully) be funny. But, oh, did Lez Bomb prove me wrong. The film centers on a woman bringing her girlfriend home for Thanksgiving only for her coming-out efforts to be interrupted by the unexpected arrival of her male roommate (who *shocker* is in love with her). The family immediately expects the roommate to be her boyfriend and from there mishaps and mistakes continue to pile up. Jenna Laurenzo’s feature directorial debut (she also wrote and starred in the film) is not only one of the better offerings Netflix has on its service, but is simply da (lez) bomb! 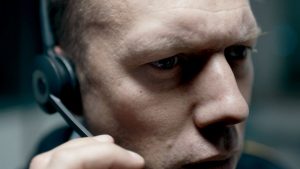 Based in an emergency call centre in Copenhagen, The Guilty focuses on police officer Asger (Jakob Cedergren) who has been temporarily assigned to answering emergency calls. Internally he is dealing with some personal demons and we watch on as he receives a number of nuisance calls, followed by one that sounds infinitely more sinister. It’s a tense affair with a number of unpredictable plot twists developing, as Jakob tries to handle a delicate situation with the limited tools at his disposal. An American remake has been touted with Jake Gyllenhaal in the lead role, but with a tight runtime of 84 minutes, there’s no excuse not to watch the original before its inevitable Hollywood butchering.

Two old friends (Pat Healy, Ethan Embry) have their life turned upside down when they meet an eccentric couple (David Koechner, Sarah Paxton) who pay them vast amounts of money to complete harmless dares but once the dares start escalating, the friends slowly start to turn on each other. One of the best directorial debuts of the decade, E.L. Kat’s Cheap Thrills is a pitch-black comedy that gets increasingly more outrageous and tense with each dare but never crosses the line into unbelievability. The dares are just crazy enough to make you wonder whether they’ll do them but not crazy enough to end the game because once they refuse to do a dare, the game, as well as the movie, is over. The film does a great job of pushing right up against the line without crossing it. It’s a pretty messed up satire that forces the audience to wonder what they’d do in that situation whilst delivering an entertaining thrill ride. 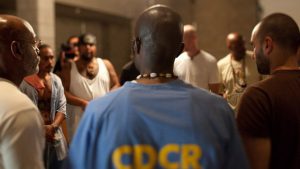 A punch-in-the-gut stripping away every last ounce of superficiality. To call this documentary visceral would be an understatement. The Work is a glimpse into the divisive world of the prison system — and the grueling work of rehabilitation and coming back to feeling. Director Jairus McLeary treats us — the viewers — as though we are active participants in this groundbreaking therapy session. Blending average-Joe outsiders with the likes of Bloods and Crips inside Folsom’s system was an unflinching and primal tour-de-force of which I was not prepared. The Work is an emotionally honest experience that is difficult to swallow, but vital in its importance. This one sideswipes with emotion and is not for the faint-of-heart. 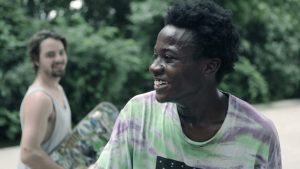 Minding the Gap is a documentary that unveils unkempt truth and addresses skeletons in the closet, it’s the moments of subtle, simplistic beauty that makes it a complete experience of which you can’t wash off. Liu’s debut non-fiction feature is as moving and poignant as anything I’ve seen in recent memory. It opens on a montage of three kids skateboarding, carefree and without any worries in the world. Surprisingly emotional, Bing Liu frames the comfort of this hobby-haven with delicacy and tenderness. Because, after all, this is their home; their family. But after that, reality creeps in and the film blindsides you with harsh truths. It’s a film that tricks you into believing it’s a sports movie when in actuality it’s a ghost story. No, not a paranormal tale or a horror film—a film about how the cycle of bad parenting is a ghost of shitty behavior which is past from one child to the next and how we all have to perform our own individual exorcisms. It’s a sobering look at the cycle of neglect and abuse so many families face and how a lucky few can break free. 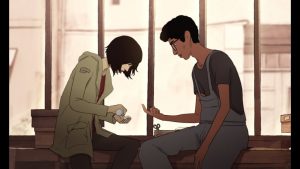 Never before has a story of a severed hand running the streets been so beautiful. This is one of the best animated movies of the past decade that is unique, heartwarming and at times, head-scratching. Watching this severed hand navigate gutters, fight off rats and other obstacles really draws you into the story as it bounces back and forth between a severed hand on a mission and budding romance. A fantastic score with a touching story and some solid voice work help make this a standout animated film from the past decade.

Unable to connect to the world or anyone in it, a solider with PTSD (Ben Foster) chooses to live the survivalist lifestyle with his 13-year-old daughter (Thomasin McKenzie) but when she’s spotted by a hiker, their entire existence is upended. Leave No Trace is a beautifully restrained, minimalist character portrait of a unique family dynamic. There’s is an ecosystem-based on fear (if they get caught, they get separated) and respect (they work as a team, never bickering or arguing) but as the daughter sees more of the world, the life the father worked so hard to create for themselves, starts to come undone.

A lesser movie would’ve made the father character an overbearing villain but it’s clear that he’s a victim of his own good intentions. He knows he’s damaged and he knows this isn’t the right way to raise his daughter but he just can’t conform. He’s a lone wolf raising a wild stallion who yearns to be free. Once her desire for environmental stability pushes up against his disdain for civilization, the film creates a dramatic fork in the road which leads to a powerful conclusion that is as heartbreaking as it is inevitable.

What do you think of the selection so far? What are some films from the 2010s that you think are hidden gems? Maybe they will show up further on the list!