Just like how every script has a three-act structure, every film that involves a hero on a quest can be broken down into these twelve elements. But that doesn’t mean that each step is important. The formula may be ironclad but there’s one step that’s far more crucial than the others and that’s step six: Tests, Allies, and Enemies.

The hero can be uninteresting and the quest uninspired but if your villain is lame, nobody will give a shit. The hero is only as memorable as the villain he’s fighting. James Bond is one of the most iconic characters ever but the only films anyone gives a shit about are the ones where the villain is amazing. From the mustachio twirling, train track tying ne’er-do-wells to mask-wearing slashers to universe destroying uber baddies, cinema has had a long love affair with evildoers but which one is the most dastardly?

These are The 100 Greatest Villains Of All Time. 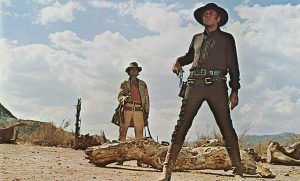 There’s something about the wide-open stretches of desert that bred some of the best villains of the golden age of Hollywood. John Ford was a veritable one-man western pumping machine. He produced dozens and dozens of westerns within that time but after the space race, America turned its attention to sci-fi flicks. Westerns were a dead genre.

That is, until, Italy brought it back. Taking our television stars who could no longer find work and reusing as many sets and props as they could possibly get away with, Italy’s low budget western resurgence would eventually be referred to as “spaghetti westerns” and its king was Sergio Leone. He made a trio of classics with Clint Eastwood (back when no studio wanted him) which eventually made him a star but that role was never meant for him. Charles Bronson was the first choice but had to turn it down. But if he hadn’t, it wouldn’t have been a trilogy but a quadrilogy with Once Upon a Time in the West as the final chapter.

That’s a lot of shoe leather to explain the weight this film could’ve had. As it stands, the film is still fantastic but seeing the man with no name finally confront the ghost of his past by the name of Frank could’ve been amazing. Playing wildly against type (so much so, that he never played a villain again), Henry Fonda is as evil as Bronson is silent. We may have been robbed a Eastwood vs Fonda match up but even Eastwood couldn’t have been a match for Frank. He’s the backstory to Eastwood’s Bill Munny that Unforgiven only hints at but actually delivers. 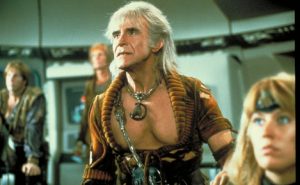 Initially appearing as a villain in the episode ‘Space Seed’ of the original show, Khan proved to be so popular among fans, that the creators brought him back without hesitation. After an exile to a dying planet goes disastrously wrong, Khan seeks revenge against the ones responsible: Kirk and the USS Enterprise.

The Khan\Kirk relationship is a painfully on the nose reference to Moby Dick with Khan as the revenge plagued captain and Kirk as the object of his obsession. It’s all very cliche but Montalban sells every scene. He makes you believe every line of dialogue, regardless of their believability because he says everything with authority and sincerity. This is the closest we’ll ever get to Shakespeare in space. 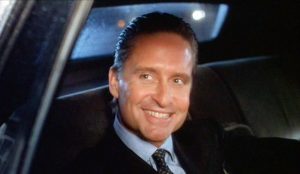 Inspiring generations of wall street brokers, Michael Douglas’s Gordon Gekko is the human embodiment of greed. He’s a fast-talking snake oil salesman that lives to buy any stock, regardless of the legalities and sell garbage stock to unsuspecting victims. He’s the personification of a piece of grapefruit in a fruit salad. Seemingly innocuous at first, he slowly sours everything around him until the only thing left is rotten. The worst thing about him? He’s still a role model to stockbrokers and wall street tycoons to this day. 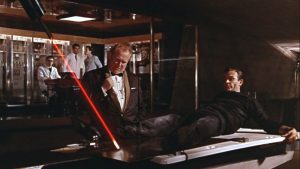 The Bond series has been around for so long and has acquired so many tropes, that it evolved from being a simple franchise into a genre. You know all the hallmarks of a Bond film, whether you’ve seen one or not. The barrel sequence, women with sexual innuendo’s as names, the outlandish gadgets, the cool cars, the secret lairs and the unforgettable villains. It’s a checklist of cliches now but only because Goldfinger created the template.

While not being the first film in the series, it set the ground work for each subsequent entry and some would argue, still hasn’t been topped. Because what this sequel understands better than almost all of them, is the fact that the film is only as good as your villain. And based on that logic, Goldfinger is easily within the top five. The woman covered in gold, the deadly hat throwing henchmen, the secret lair with a laser beam centerpiece, a ridiculous plot involving tainting the gold reserve at Fort Knox, Goldfinger has it all. 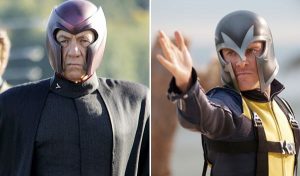 At the outset of their creation, Stan Lee and Jack Kirby had envisioned the X-Men to be a metaphor for racism. They used mutations as an analogy for being different. To be ostracized because you were born unlike the norm. Professor X and Magneto were heavily influenced by Martin Luther King Jr and Malcolm X respectively. One preached for harmony, while the other prepared for war.

That template is what separates Magneto from every other comic book villain. Even when he’s at his most diabolical, you still sympathize with him. Because although he’s tried to wipe out humanity multiple times, he truly believes what he is doing is righteous and considering he’s a survivor of a concentration camp, he’s not wrong. 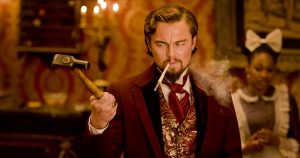 In the first draft of the script, The role of Calvin Candie was supposed to be much older. In fact, Stephen (Samuel L. Jackson) wasn’t supposed to be a surrogate father but more like a brother. The decision to make him younger actually makes his actions far more repugnant. Not a single thing he does in either the script or film is different but it does drastically alter the context.

He’s still a monster regardless but there’s something almost more evil about a man who’s done nothing to earn his wealth and is so overwhelmed by boredom, that he buys human beings for the sole purpose of watching them kill each other. In career made up of nothing but villains, Candie is far and away Tarantino’s most morally corrupt. 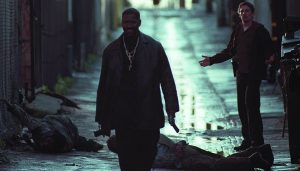 Without getting too political but is there anything more timely than a story about a dirty cop constantly getting away murder? Much like Henry Fonda’s Frank from the aforementioned Once Upon a time in the West, it’s always refreshing to see an actor primarily known for likeable good guys take on something dark and that’s Denzel Washington’s Alonzo Harris.

Harris is among the filthiest cops ever portrayed on screen. There’s something delightfully taboo about watching someone who’s duty is to serve and protect, commit as many crimes as humanly possible in the shortest amount of time. The film is still unfortunately still prescient but undeniably enjoyable and the lions share of that credit goes to Denzel Washington. 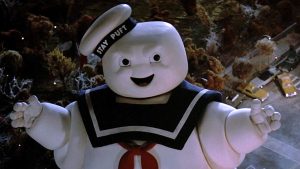 Appearing as the final form of Gozer the Gozerian, a Sumerian god of destruction and chaos that’s summoned by a pre WW2 era cult, The Stay Puft Marshmallow Man is an exceptionally clever idea for a villain and it’s executed perfectly. The creators easily could’ve gone with a generic demon we’ve seen a million times but instead, they weaponized nostalgia. They turned a (fictional) childhood memory into a rampaging Godzilla-esque monster and that uniqueness definitely earns it a spot on the list. 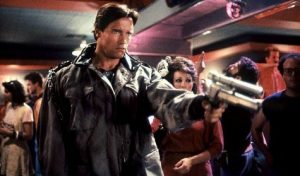 Cherry picking the best elements of Yul Brynner’s Gunslinger from Westworld and Michael Myers from Halloween, the Terminator is the ultimate killing machine. He’s an unrelenting, unstoppable robotic assassin driven by one mission: kill Sarah Connor.

If there was ever a role an actor was born to play, you’d have a hard time finding a better example than that of Schwarzenegger as the Terminator. Between his perfect physique and his iconic accent, it’s impossible to picture anyone else in the role.

Fun Fact: OJ Simpson lost the role because he was deemed “too nice.” 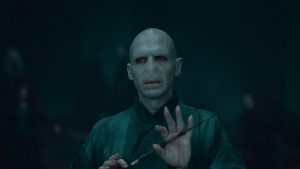 When author J.K Rowling set out to create the ultimate antagonist for the titular boy wizard to go up against, she drew from three major sources: Adolf Hitler, Ronald and Reginald Kray and a snake. The dictator was chosen because he’s one of the best examples of supreme evil, the twin gangsters that ruled England’s underground were chosen because they inspired such fear among people, that most refused to say their names aloud and a snake was chosen because, as you know, snakes are mother nature’s assholes.

Combine all that with magical powers that exceed that of Sauron or Darth Vader and you have yourself a threat that’s so formidable, it took eight films and an entire school of wizards to take him down.