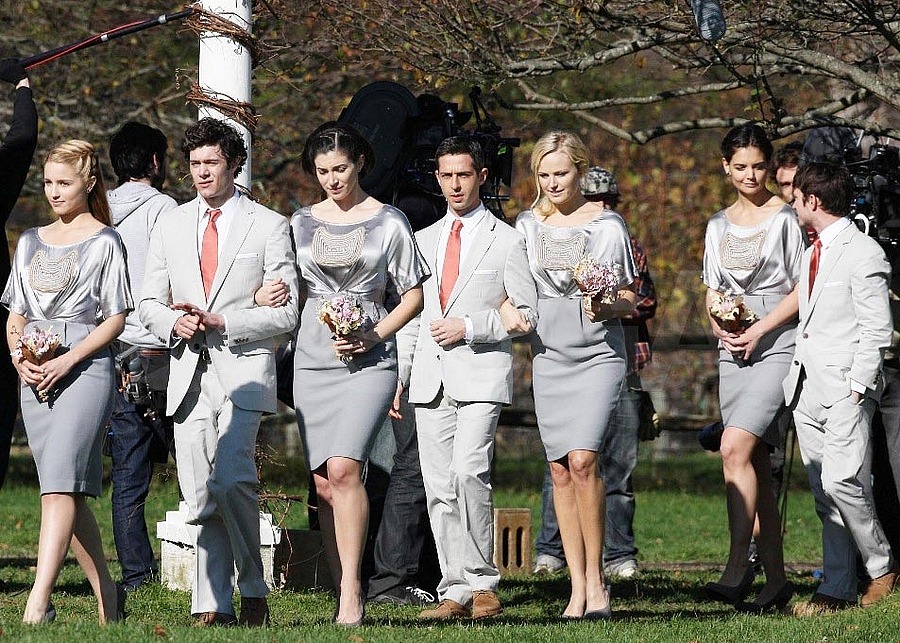 Laura Rosen (Katie Holmes) is about to have a difficult weekend. Not only is her former college roommate and best friend Lila Hayes (Anna Paquin) getting married to Laura’s ex-boyfriend, Tom (Josh Duhamel), but Laura is also the maid of honor. Laura, and the rest of their mutual friends, convene in Maine at the seaside estate of Lila’s wealthy parents. And thus begins a weekend of awkward wedding toasts, drunken shenanigans, and forbidden kisses.

Written and directed by Galt Neiderhoffer, I felt like The Romantics had a lot of potential. After all, Neiderhoffer wrote the novel, and who would know the source material better than the author herself? Unfortunately, a novelist’s vision does not always translate well to screen. The premise was an intriguing one, because I am always curious about a character’s motivation for attending the wedding of an ex-lover, especially one getting ready to marry a friend. Are they that masochistic? Do they plan on trying to break up the wedding and steal the groom/bride back? Laura’s intentions feel like a little bit of both.

I’ve always loved books and movies where longtime friends come back together to deal with adulting drama. But their success always depends on characterization and just how much time we’re allowed to get to know them before we reach the last page or the end credits. It’s okay to have one or two unlikeable characters in a movie like this. It actually adds depth and feels more realistic to me when there is. But when every single character is selfish and pretentious, I’m going to have a hard time caring about the outcome for any of them.

Along with the love triangle of Laura, Tom, and Lila, we also have Malin Akerman and Jeremy Strong as the married Tripler and Pete. Adam Brody and Rebecca Lawrence are a long time couple engaged to be married… eventually. Laura explains in her wedding toast that their group of friends had been nicknamed the Romantics, because of their “incestuous” dating history. I suppose the explanation is necessary to try and justify to the audience the behavior of all seven friends before the bride and groom exchange their vows the next day.

Holmes gives it her all in her performance as forlorn Laura, a writer struggling to come to terms with the fact that her on-again/off-again boyfriend is marrying her perfectly blonde, perfect best friend (ex-best friend? Who knows.). But frankly, Laura is a bit dull. When Tom tells Laura that Lila is a safe choice, I can’t help but wonder why. Lila is sorely underwritten as a character, spending most of her time talking to her neurotic mother, Augusta (Candice Bergen in a small, but snappy role), or her doe-eyed innocent little sister, Minnow (Dianna Agron). But she shows some flashes of cunning fierceness in her scenes with Tom and Laura, which is more than I can see for the pining, quiet Laura.

To be frank, Lila probably deserves someone better than Tom. Sure, he’s good looking, but he’s also a bland cad, having hooked up with Lila while still with Laura… and then proposing to Lila after a night of emotional bonding and sex with Laura. He’s an indecisive jerk and we never get a feel for who he is as a character. We’re told, but we’re never shown. I had a very difficult time trying to figure out why Laura and Lila were struggling so hard to win Tom. Unless it was never about Tom, and it was just about winning. Female friendships can be insanely complicated and layered and had The Romantics focused more on Lila and Laura’s rivalry and friendship, and less on their desire to have Tom, it might have been a much better movie.

We don’t spend enough time with the rest of their friends to really care about the sexy merry-go-round they’re all riding. They feel like plot devices given to us to explain Laura, Tom, and Lila’s history and then they’re all making out with each other, and honestly, who cares. Elijah Wood pops in to give a hilariously brutal wedding toast, and then he disappears until the end of the film, which is a shame because his character, Chip (Lila’s brother), is one of the only ones in the movie with any complexity.

I loved the scenery. A seaside estate in Maine? Gorgeous. But the camera work was so focused on being “artsy” that I rarely got to enjoy the look of the movie. Grainy one minute, out of focus and blurry the next. It didn’t add to the movie’s atmosphere, but distracted from it instead. All in all, The Romantics could have been a really fun, enjoyable romantic dramedy had it stopped taking itself so seriously and given its more talented cast more screen time. Heck, it could have been a really fun, enjoyable drama had it not taken itself so seriously. I don’t use the word “pretentious” a lot, but that was The Romantics in a nutshell. Pretentious and clumsy.