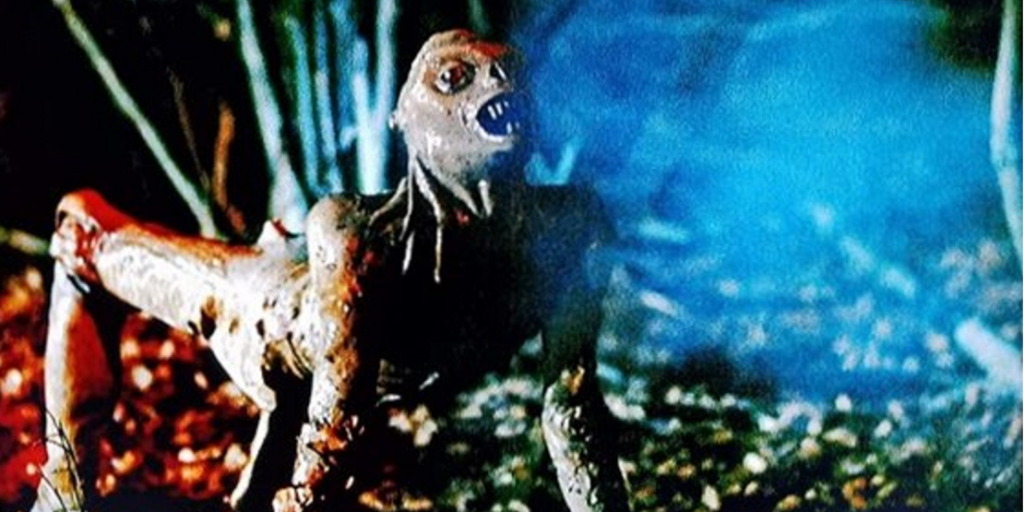 “It’s movies like this that give movies a bad name.” – Roger Ebert

I have a rule: Any film that shows me something I’ve never seen before, and also doesn’t bore me, cannot be considered bad.

I don’t care if it’s the cheapest, most poorly made trash on the planet. If it adheres to that rule, I’ll consider it a success.

Xtro is many things. Many, many things but it was never boring and by god, did I see some shit I’ll never see again.

The film begins with Tony and his father having a good ol’ fashioned father/son bonding moment. They’re playing that classic game of “Throw the stick. Catch the stick” and I have to point out that Tony is not a dog. He’s playing a game you play with dogs but with his son. But they’re having a good time, so I guess I’m the asshole. The father throws the stick in the air and the sky cracks open and takes the father away.

Cut to three years later and Tony’s mom has a new man and Tony is just trying to get by. He really misses that stick.

In an unrelated scene, we see a comet? space ship? something? crash in the woods. And something crawls out of the wreckage. Then we’re introduced to a couple driving down the road and they accidentally hit the creature.

The man goes to investigate because he’s the dumbest person to walk this fucking earth. Who the fuck would check to see if that abomination was fine?! “Oh. Maybe he’s a scientist and he…..” I’m gonna stop you right there because you’re stupid and I don’t want to hear your mouth.

He tracks it down and immediately gets killed and his lady friend goes to check on his stupid ass and the alien kills her as well.

We cut to a scene with a lady feeding her cat and apparently she lives close to the woods because the alien breaks into her house and alien-rapes her. She’s instantly pregnant.

Now we play the game: “What crazy thing is she going to give birth to?”

We then get like ten minutes of just family shit, before the mother goes to the school to pick up Tony. The school informs her that his father already picked him up. She rushes home to find her husband back after three years. But as an audience member, we just saw him come bursting out of a woman’s vagina like eight seconds ago, so we know. We know.

Now that alien pappy is back, the film focuses on the weird power struggle between the step-dad and the real dad…that’s an alien. This goes on for some time until Tony sees alien dad eat some of his pet snake’s eggs. This freaks Tony out and he runs out of the house.

The father catches up to him and explains that he needs eggs for breakfast and I guess Tony must really miss catching that stick because he buys that bullshit like a sucker. Then alien father infects Tony with some alien shit. Now that Tony is part alien, his father explains that he has powers now. Everyone goes to sleep and in the middle of the night, Tony is visited by a friend.

And now we play the game: “Who visits Tony?”

It’s a dwarf clown. Stop trying to guess the stupid shit that happens in this film. There is no explanation given to the sudden appearance of said clown. He just shows up and does some yo-yo tricks.

The snake, who escaped after the alien pappy ate her babies, somehow made it through the walls and into the next-door neighbor’s house. She finds him in her salad of all places and proceeds to murder the fuck out of it. She then gives it to the mother in a zip-locked bag and blames Tony for being a terrible snake handler. Tony is like nine years old. She’s right but still, cut him some slack.

Tony is chilling with his new clown buddy and they’re apparently making too much noise for the neighbor to handle because she keeps banging on the roof with a broom. Tony has had enough of her shit and decides she’s gotta go.

Now we play the game: “How does Tony kill the old lady?”

It’s the toy soldier. I tricked you. Also, fucking what?? He shoots at her and then stabs her a bunch with the bayonet. You might be starting to realize that this film is insane and you’d be correct.

Bonus note: At some point in the film, Tony is covered in blood. This is way before he’s an alien. Again, no explanation is given.

Xtro: Not a single fuck was given.