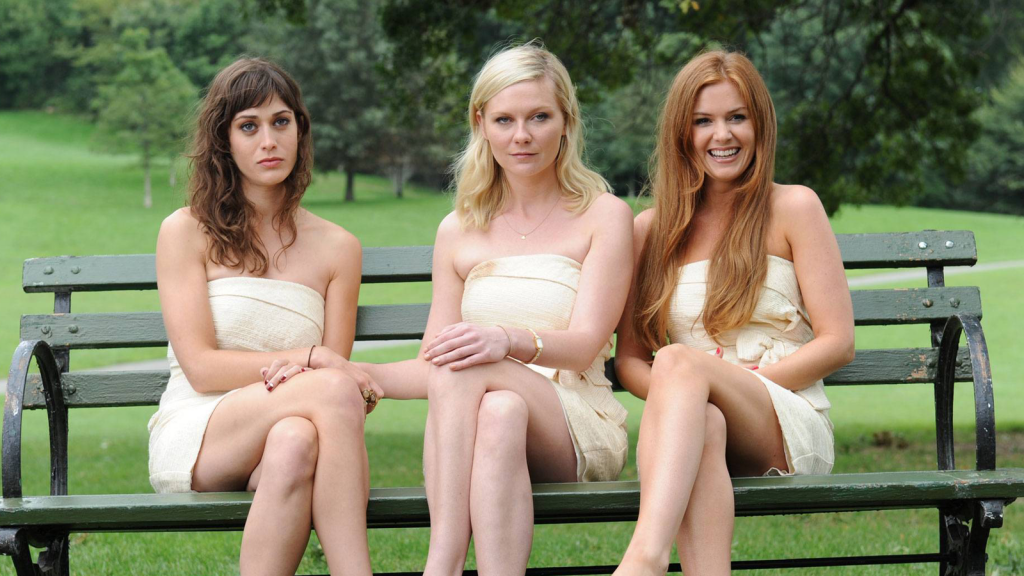 When plus-sized high school friend Becky (a sorely underused Rebel Wilson) announces that she’s engaged to be married, her controlling, mean spirited best friend Regan (Kirsten Dunst) spirals into seething disbelief. She is given maid of honor duties and immediately calls their two mutual high school friends Katie (Isla Fisher) and Gena (Lizzy Caplan) to announce the news. The three women try to figure out how their friend, nicknamed Pig Face in high school, managed to land her fiance Dale (Hayes MacArthur), who is not only handsome but rich to boot.

Despite their incredulity, they also realize this means they get to come together to enjoy the wedding festivities. Notably, the bachelorette party. Six months later the four former friends are reunited the night before Becky’s wedding. Katie and Gena are eager to snort some cocaine, drink, and get the party started but Becky informs them that she’s no longer the partying type, and she and Regan have planned a laid back party in the hotel room with champagne. This doesn’t stop Katie from calling in a stripper, and from there the party turns into a disaster with Becky angrily informing her friends that they’re not invited to the wedding if they “can’t be normal people”.

This doesn’t stop Regan, Katie, and Gena from continuing the party on their own. During a coked-up evening, they accidentally tear Becky’s wedding dress and set off into the seedy streets of New York to try and find a way to mend it before morning. Their plans get derailed when they run into Dale and his friends on their way to Dale’s bachelor party, including Clyde (Adam Scott), Gena’s former high school boyfriend with whom she has a rocky past. Tagging along is also Trevor (James Marsden), a smarmy jerk who is eager to bed one of Becky’s bridesmaids, and Joe (Kyle Bornheimer), another high school classmate who used to sell Katie weed and still harbors a crush on her. Over the course of the evening, all three women have to deal with their past while trying to figure out what the future may hold, all the while attempting to repair Becky’s wedding dress, which is subsequently bled on, thrown in a pile of garbage and used as toilet paper by a stripper.

Despite the same themes of friends dealing with jealousy and insecurities while leading up to a wedding, Bachelorette is definitely not a Bridesmaids clone, nor does it try to be. If anything Bachelorette is Bridesmaids caustic, cocaine-fueled cousin. The three leading ladies are extremely unlikeable, and the only reason you root for them is because Becky deserves better, and you don’t want to see her big day ruined by her drugged up, so-called friends.

Dunst is the film’s highlight as the self-centered, bitchy maid of honor Regan. She’s a pain in the ass and unnecessarily horrible to the people who are helping plan Becky’s wedding, but there are moments where you see her questioning her sense of self. This doesn’t excuse her behavior, but adding a touch of vulnerability keeps Regan from becoming a one-dimensional mean girl. Fisher’s Katie is oblivious and a bit dim, but she’s also a woman who wants more out of life, namely a boyfriend who will be nice to her, preferably with a job. Fisher has enough comedic talent and sweetness to make Katie the most likable of the three B-Faces (nicknames given to them in high school), despite her habit of making extremely bad choices. Caplan is exactly what I expected her to be. Gena is the sarcastic yet cool friend who wants everyone to believe she doesn’t give a sh*t about anything when it’s very clear that she does. This isn’t the first time Caplan has played this particular role and it comes naturally to her. Gena owns the movie’s sweetest romantic subplot as she and Clyde go on a mission to try and fix Becky’s wedding dress while reminiscing about their past and what drove them apart. This is the second movie I’ve seen where Adam Scott has played a former flame that some beautiful woman just can’t seem to get over (Headland’s Sleeping With Other People being the other), and given Caplan and Scott’s chemistry, I totally get it.

The movie honestly doesn’t have a lot of laughs like Bridesmaids or The Hangover and I often wondered why on earth someone as lovely as Becky would continue to be friends with three horrible women. But it’s an interesting study of friendship and how it matures (or sours) long after high school has ended. It’s possible to be happy for a friend but also suffer from crippling insecurity about the state of one’s own life, though Bachelorette certainly takes these insecurities to the extreme. At times I felt like the movie was trying too hard to prove that women can be just as raunchy and crude as men that it came across as obnoxious and while there were brief moments of heart, the rest of the film just fell flat for me. The end was far too easy, happy endings tied up in a bow with very little to no consequence for bad behavior. There are some fantastic performances, but that’s not enough for me to consider Bachelorette worthy of a repeat viewing.