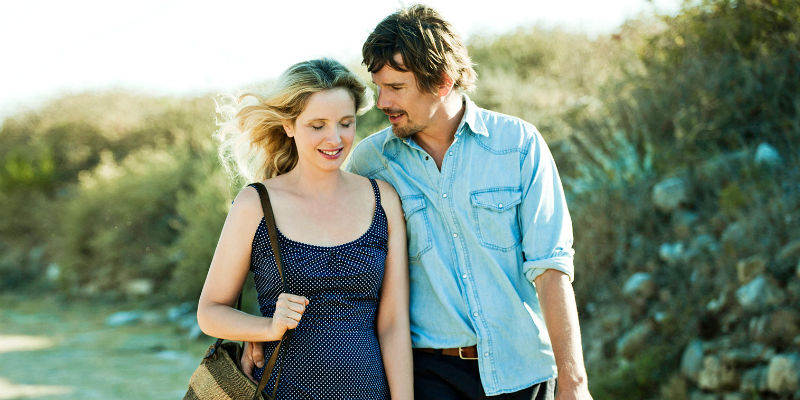 Nine years after the events of Before Sunset we find Celine (Julie Delpy) and Jesse (Ethan Hawke) unmarried, but officially together as they vacation in Greece with their eight-year-old twin daughters. Jesse, a novelist with three books under his belt now, has just sent Hank, his young teenage son from his previous marriage, home to Chicago and he begins to realize the regrets he harbors of not being there during Hank’s formative years. Celine is contemplating a job with the government, which she feels extremely conflicted about despite Jesse attempting to support whichever decision she makes. She is also afraid that Jesse will want to move them to Chicago to be closer to his son, and if she refuses he will end up resenting her. Jesse denies this of course, but it’s this fear that hovers over the couple for the remainder of the film.

What made Before Sunrise and Before Sunset so riveting was that Hawke and Delpy carried both movies solely on their shoulders. It was their natural, revealing conversations that fueled the films. For the first part of Before Midnight, Celine and Jesse are surrounded by a handful of friends whom they have gotten to know fairly well over the past six weeks. I was wary of this change in direction, but the added characters felt necessary to show exactly where Celine and Jesse were in their relationship compared to the others, how their views of the past might have changed over the years. They share one last dinner with these people, where their conversations touch upon love and loss. It’s here that you can see cracks in Jesse and Celine’s relationship, where resentments are expressed, disguised as jokes or teasing when surrounded by others.

As it is their last night in Greece, these new friends have booked Celine and Jesse a hotel room in town so they would have a night alone without their daughters. It’s a lovely walk from the villa into town, and this brings Celine and Jesse away from the company and buffer of the others. Once again we’re with the couple on their own. But whereas in the first two films, we wondered if they would get together, here we begin to question if they’ll stay together. The light flirtation is still there, as is the affection, but there is also irritability and frustration. The questioning of their choices and the consequences that came with them. It’s so easy to fall in love, but Jesse and Celine are learning how hard it is to stay there.

As soon as they reach the hotel, one thing leads to another and for the next thirty minutes or so, we’re witness to an intense argument where harsh words and accusations are hurled about the room. The brutal honesty is uncomfortable and so painfully real. Watching these two people find each other and fall in love over the course of two movies makes it extremely difficult to watch it all unravel here, but Delpy and Hawke give such emotionally nuanced, mesmerizing performances that you can’t look away from it. Gone is the romantic fantasy that Jesse wrote about in two of his books. Instead, we’re treated to reality, where nothing is perfect and not everyone has a happy ending. Yet at the same time, Linklater keeps the movie as heartfelt as the first two because you know how important communication is between Jesse and Celine. Their relationship was built on it, and it’s clear that it’s been a while since they had an honest conversation. As long as they keep talking, you feel like there is hope for these two to stay together and the romantic spark is not completely gone.

Despite how badly I wanted a continuation of Celine and Jesse’s story after Before Sunrise and Before Sunset, I feel like Before Midnight is the perfect ending to their saga and to this trilogy. All three movies are so close to perfection that I fear anything more might be too much. And really, I just want to cling to the bit of optimism given to me in this film and believe that Jesse and Celine did get their happy ending.