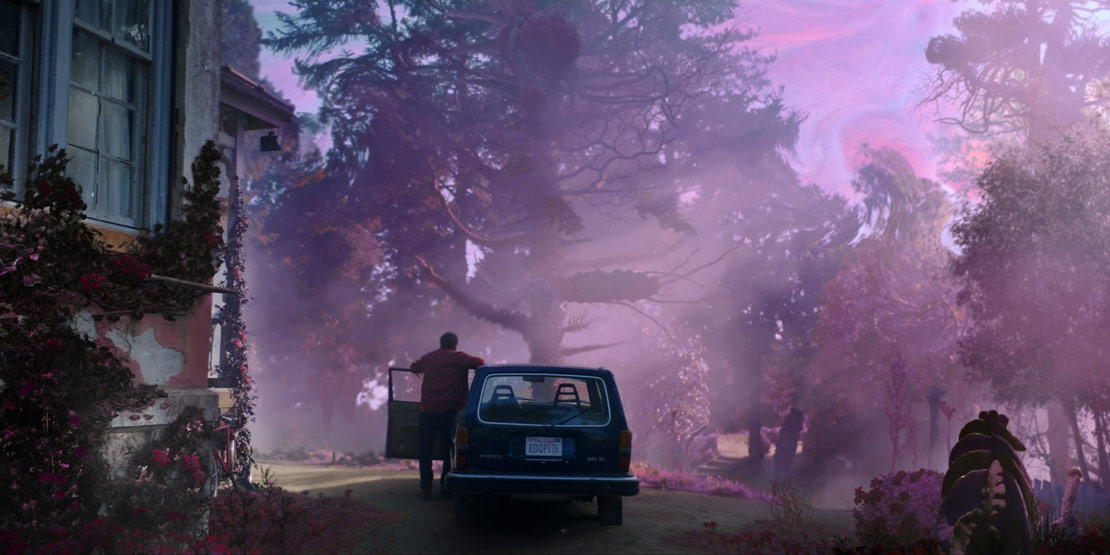 Richard Stanley‘s 2019 adaption of the classic H. P. Lovecraft tale, “The Colour Out of Space,” is the fourth such film adaptation (though other films – notably 2018’s Annihilation – take obvious inspiration from it). It’s also the best adaptation I’ve seen, managing to surpass 2010’s Die Farbe (The Color) by dint of a more coherent narrative, good performances and a (much) larger budget.

Color Out of Space begins with a voice-over by Ward (Elliot Knight), the words recognizably Lovecraft’s. It’s a nice touch, and lends a bit of old fashioned weirdness to the shots of moody and mist-filled forest. The landscape – at least to this New Englander’s eye – is obviously not that of Lovecraft’s Miskatonic Valley. Everything is a bit too overgrown, too lush. The looming trees and overfull landscape are off – and so are the various members of the Gardner family. 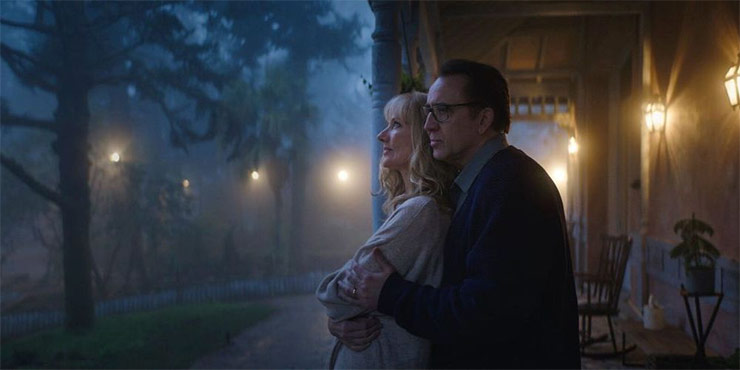 Patriarch Nathan (Nicolas Cage), nervous and awkward around his wife, kids and strangers in equal measure, is trying to make a new life at the remote farm he spent a bad childhood in. His wife, Theresa (Joely Richardson) is an intense, brittle woman, trying to hold on to her high pressure finance work while struggling with poor internet connections and the aftermath of breast cancer. Their daughter Lavinia (Madeleine Arthur) dabbles in Wicca (and darker things, if her paperback copy of the Necronomicon is any indication), pines for their lost life in the city and dreams of running away. Older son Benny (Brenden Myer) escapes to the stars online and smokes pot with the local squatter, Ezra (Tommy Chong) between farm chores. Youngest son Jack (Julian Hilliard) is lost in the shuffle mostly, spending much of his time with the family dog, Sam.

Into this odd and precarious family dynamic come two disruptive elements – the first is Ward (our opening narrator), a hydrologist surveying the area for a proposed hydroelectric dam. He’s nominally our audience POV character, the “holy crap, this is weird, isn’t it?” voice of reason, and romantic interest for Lavinia, but his presence is sporadic and low-key enough that he never really engages. The other element is a fiery visitor from the stars, or possibly from beyond them. A meteor that crashes into the Gardner front yard, bringing with it a strangeness, a growing sense of unease, and something very much like a color, though a color that no one can quite name. (I call it vibrant pink, maybe edging into purple a bit.)

It’s the effect this visitor – the Color, rather than the rapidly disappearing meteor – has on the Gardner family that’s the focus of much of the film. The family is already on the edge of chaos to begin with, struggling with conflicting needs and desires, and the presence of the Color pushes these conflicts into the open. Frayed tempers, simmering resentments, quirks of personality – all of these are heightened and expressed. The Gardners, like the land and creatures around their farm, begin to change. 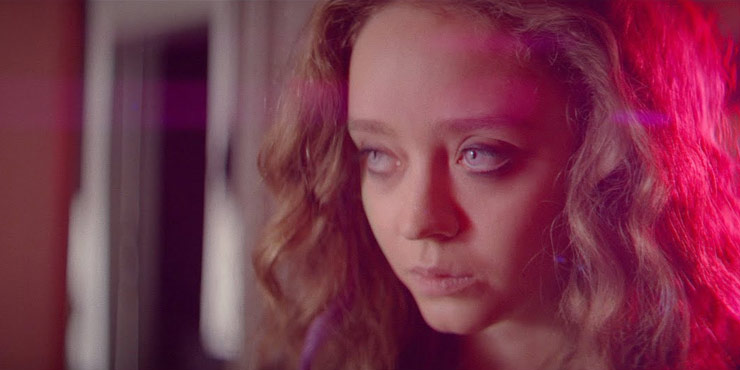 If there’s a weakness to the film, it’s in our attachment to the Gardner family. It feels like we barely get to know who they are before the oddness starts to creep in. Much of the balance of emotional weight here has to rest on how invested we are in these characters and how much the change affects them. In this, the instincts of the two main actors – Cage and Richardson – work against the film. They’re naturalistic, and the dialogue between them often has an improvised feel to it. It’s well done and feels natural, but it’s the only thing about the film that does feel that way and sticks out a bit as a result. As if someone had stuck scenes from a relationship drama in the midst of a psychedelic horror flick. When things go awry and Cage in particular begins to bring in elements of a persona that will feel familiar from half a dozen other unhinged performances, I was still so unsure of who he was as a character that I couldn’t readily tell when he was being affected by the Color and when he was just being a flustered, awkward dad/husband.

Of all of the characters, I most liked poor Benny, as his reactions seemed the most normal to me. Everyone else’s building idiosyncrasies are dramatic, but he mostly seems to wander in shock, wondering what exactly is going on with the land, the people and even time itself. Me too, buddy. Me too. 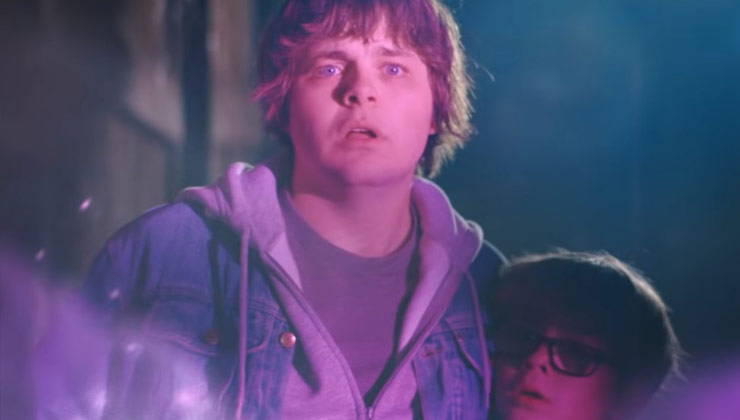 Events in the film take place over a few days, rather than the entire growing season of the original story. For me this was a bit of a drawback, leading to that feeling of suddenness, of dramatic change in behavior that often didn’t seem realistic. Instead of a gradual decline things go from bad to catastrophically so, requiring some hoary plot devices like the “car won’t start” and “the horse is spooked” to keep the characters isolated and involved.

For about half the film the horror is mostly suggestive, rather than explicit. There’s a moment with a knife, carrots and distraction that’s ratchets up the tension fairly well, but it’s when the effects of the color become obvious that the movie really cranks into gear. Lovecraft’s Color is a more passive presence, an insidious corruption that’s known mostly by its affects on the people and environment. In Stanley’s vision the Color is a more active participant, capable of occasionally striking out in violent and physically disruptive ways. In addition to increasingly aberrant foliage and hallucinatory visual effects there are enough body-horror images to satisfy the Cronenberg fans in the audience. A series of scenes in the attic of the house easily matches and, for me, transcends the horror of a similar sequence in the original story. Not every practical effect lands – skinless alpacas are more pathetic than frightening – but those that do are very well done and a welcome grounding for all the CGI light effects. 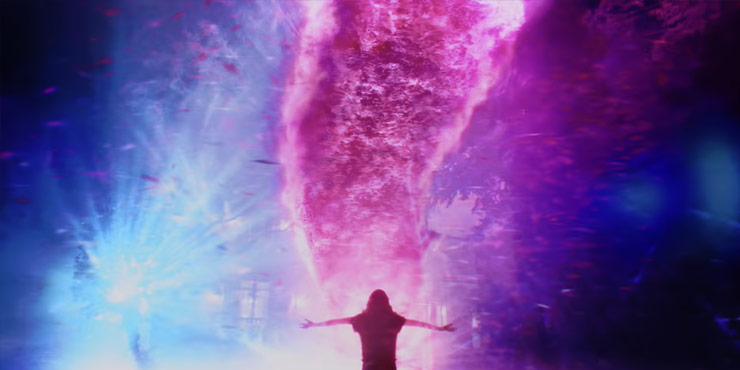 Those light effects, including displays both subtle and gross, are a character in their own right, providing moments of minor horror as well as pyrotechnics on a cosmic scale. Stanley has avoided the “how do you present a color that can’t be described” concern by simply picking an odd color and sticking to it. Though hardly “unknowable” the color is different and artificial enough that we simply buy in, and begin to look for its presence in the background, the animals, even the eyes of characters.

(As an aside, I got a migraine in the middle of the film and spent a good minute or so trying to pin down why the Color had become so kaleidoscopic.)

Though there are plenty of moments of horror in Color Out of Space, for my money nothing quite beats a trip to Ezra’s shack, late in the proceedings. Ward and the sheriff move through a nightmare forest and as they approach they can hear Ezra’s voice… speaking words directly out of the original story. “Just a color. But it burns. Sucks and burns.” Never before has Tommy Chong’s voice sent a chill down my spine. The ending is a phantasmagoria of light, sound and horror – but that’s the scene that most stuck with me after the credits began to roll. 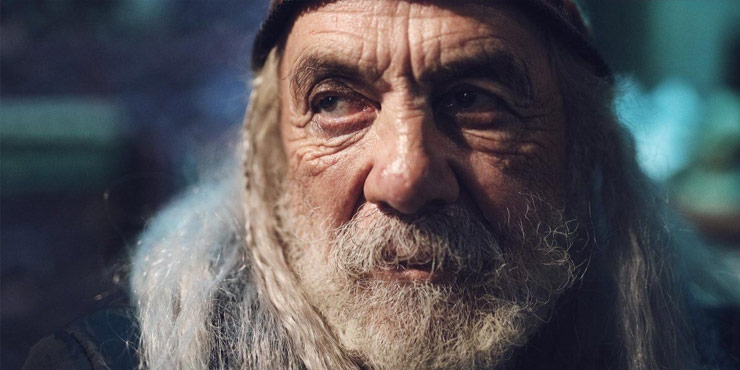 This is Richard Stanley’s first feature film since the problematic production of The Island of Dr. Moreau in 1996, though he has worked on short films and documentaries in the interim. If this is the kind of film he can make with over 20 years of rust to shake off, I can’t wait to see what other sorts of nightmare dreams he can bring to the big screen.

The Bottom Line
Managing to include much of the creeping terror of the original story, while ditching the undercurrents of class and racism, Richard Stanley’s return to genre filmmaking is fantastic, in more ways than one. Though elements – of both character and plot – are sometimes underwhelming in Color Out of Space, the effect of the whole is one of cosmic horror and existential dread. Just what I want from a Lovecraft adaptation.