Now that we’ve got our first real look at Denis Villeneuve’s new Dune adaptation, we thought it was time to revisit David Lynch’s 1984 take on the Frank Herbert sci-fi classic. Enjoy. 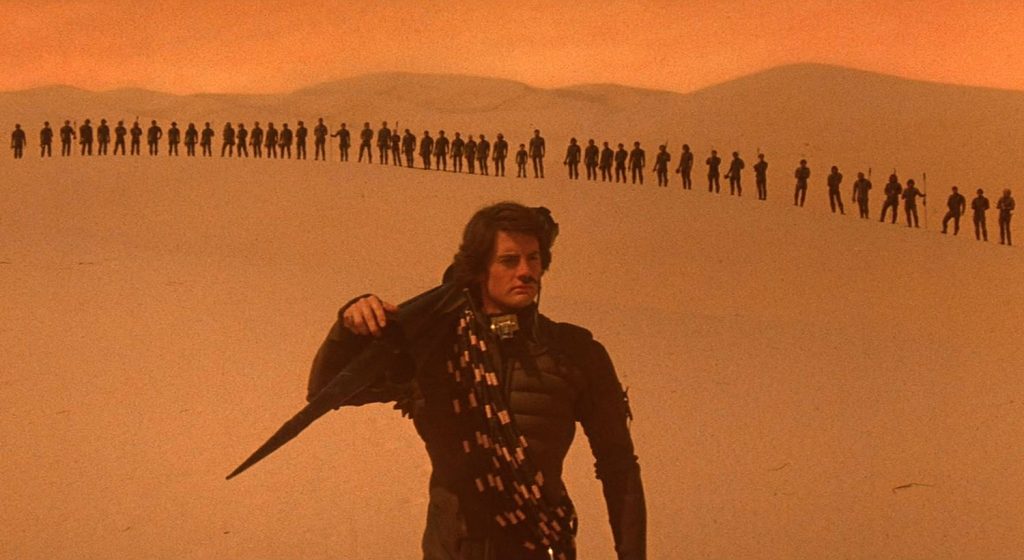 I never got into Dune. Frank Herbert’s science fiction saga was either too dense or too convoluted for my young mind, and I was a restless child full of endless stores of energy. Dune just seemed dull compared to my childhood obsession, Star Wars.

But where books are sometimes less accessible, movie adaptations are often less so.

When I was ten, my family moved from a small town to an even smaller town, and we were without cable for a handful of years. The antenna on the side of the house was highly unreliable (Dad had a pair of vice grips attached to it that one of us had to occasionally go out and turn to try and improve the signal). But this was the era of Home Video, and my family made it through those lean years of television desolation by stocking up on VHS tapes (it helped that my aunt ran a video store in a nearby town). Movies like Conan the Barbarian, Outland, The Highlander, Excalibur, and The Road Warrior were on regular rotation in our household. My dad had read all of Herbert’s books and was a big fan, so David Lynch’s flawed but interesting film adaptation found its way into our household’s looping playlist of Action/Sci-Fi/Western/Sword & Sorcery films.

Even though I never really paid much attention to some of these films, my proximity to them allowed them a kind of unsanctioned audience in my impressionable young mind, and as I grew older, some of these began to fire my maturing, teenage imagination. My love for movies like Blade Runner and Local Hero began this way. I realize now, of course, that if my dad was a fan of something, that thing had a better than average chance at securing my own interest at some point in time.

Despite all of that, I was slow to warm up to Lynch’s Dune. As a teen, I had become a huge fan of The Police, so Sting’s presence in the film acted as another potential lure, but I still found the SFX hokey and the script nonsensical. It would be some time before I would find enough patience and maturity to sit down and really give Lynch’s Dune a fair shot. Even then, though, my feelings were very mixed.

I rewatched Dune a few nights ago. I hadn’t seen it in years, and I thought it was about time to sit down with it again. The clunky SFX and overly-complicated mythology no longer barred my interest in it, but, in some ways, endeared me to the film even more. The set design for Dune is on par with that of Conan the Barbarian, Alien, and, in some ways, even Peter Jackson’s The Lord of the Rings trilogy. The Padishah Emperor’s throne room, House Atreides, and Arrakis Palace interiors are incredibly ornate, while the House Harkonnen interiors are sparse and industrial. The Fremen desert sets are even more sparse than the Harkonnen sets, but convey a completely organic feel, setting up a few of the film’s few parsable themes of Nature/Technology and Man/God.

Each of these sets, despite the accusation of being “alarmingly homogenous”, are incredibly unique, thoughtfully-crafted, and, more than any other facet of the film, do the best job of conveying the differences between the characters and cultures who people each of these environments (in much the same way, though to a lesser degree, as Jackson’s The Lord of the Rings trilogy does).

As a craftsman, I can only imagine the work that went into building these sets. I had to pause the film, particularly in the scenes set on Caladan (home planet of House Atreides), to get a longer look at some of the wood-paneled interiors. The sets work so well, in fact, that they fade into the background and you hardly notice them. It’s a testament to the talents of the designers and builders of the sets and at the same time unfortunate, as the skill that went into these sets’ construction is trivialized by its successes.

The exterior miniatures are almost as impressive as the interiors. The architecture, environments, and ship designs are as unique as the interiors, and though some of the motion capture SFX are awkwardly-implemented and antiquated (even at the time when compared to film series like Star Wars and Star Trek), the awesome scale communicated by the model ships and buildings is breathtaking.

As an aside, for this reason alone, this film belongs in a list of 70s and 80s science fiction films which perfectly illustrate the superiority of practical film effects compared with films that lean too heavily on CGI for effects shots. Because the filmmakers were limited by what they could physically build or present through some sort of sleight of hand SFX tricks, these shots were used sparingly. I think this kind of filmmaking encourages the audience to engage its imagination in order to fill in the gaps left behind by these limited effects shots. In modern big budget films, directors can just describe what they want to see and have computer effects wizards create them. The only limit is the imaginations of the creators, which sounds great in theory, but it means the audience is no longer required to bring much in the way of imagination to the table. This can be impressive and satisfying in the short term, but I think it inspires less wonder and engagement from the audience with the material over time, and I think it’s why so much of blockbuster cinema spends so much time these days looking back instead of forward. It’s trying to identify what about those films made them so enduring, but every director nostalgic for the movies of his childhood seems to miss what seems so obvious to me: the success of those pre-CGI films, their indomitability, isn’t strictly contained in the genius of the filmmakers themselves but is actually enshrined in the collective imaginations of generations of film fans. 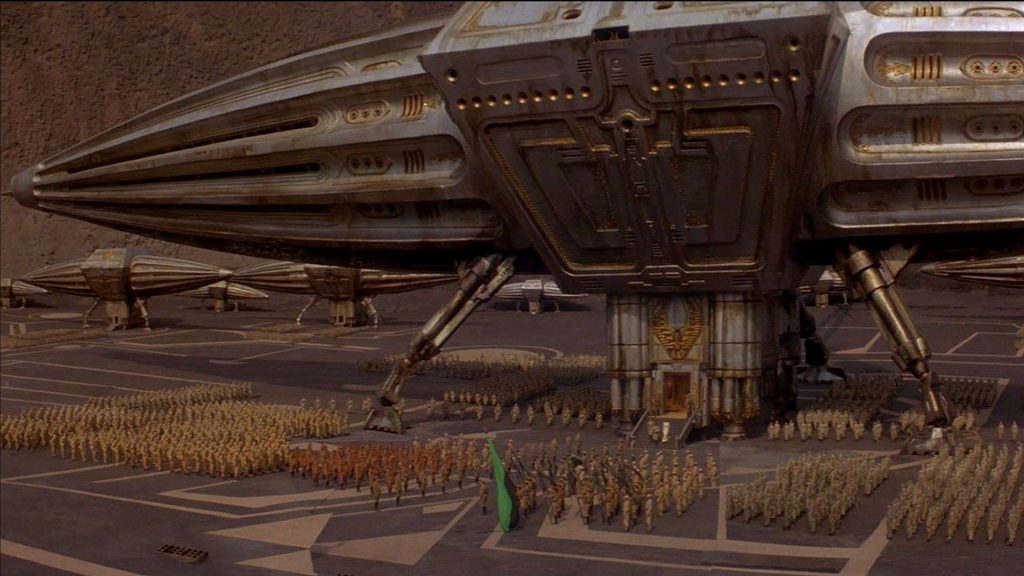 Outside of the visuals, Dune sags under the weight of an unwieldy and utterly unintelligible script, uneven pacing, atrocious performances from accomplished actors and actresses, and ill-conceived ideas on how to convey the film’s complicated plot.

Frank Herbert’s Dune is dense. It, like J.R.R. Tolkien’s The Lord of the Rings, makes use of appendices flush with maps, a glossary of terms, and “reports” on the religion, ecology, and characters from the novel. To convey much of this information (and the thoughts of characters, which make up so much of the information relayed in a novel), Lynch’s Dune utilizes inner dialogue. In other words, the actors voice their thoughts in hushed tones and these bits of audio are then clumsily edited into the film in between dialogue while characters stare into the distance with knowing looks on their faces.

The acting, almost without exception (I’ll get to the exception), is frighteningly bad. Lynch somehow manages to turn genre favorites like Kyle MacLachlan, Patrick Stewart, and Brad Dourif into seemingly freshman thespians who deliver their lines with all of the nuance and subtlety of a fucking Twitter cancelation.

The only actor in Dune in a starring role that manages to rise above the atrocious dialogue and inelegant direction is Kenneth McMillan as the Baron Harkonnen. Harkonnen, at least as he is drawn on screen, could have been an utter disaster, a caricature of an S&M villain from a Mad Max film crossed with Archie Bunker. But McMillan plays him straight, never for a moment letting on that he’s playing at being villainous. His Harkonnen is at the same time inept and terrifying and completely unsettling – his scenes alone are worth giving Dune a look.

By the time the credits roll on David Lynch’s Dune, one gets the feeling that the film was less finished than given up on. It wears its flaws like a badge of honor, daring the viewer to take exception. Almost all of the actors, at one point or another in the film, come across as if they’re reading for parts in high school plays. While the thinking behind their use is understandable, the inner dialogues of the characters (and MacLachlan’s dream sequences) are clumsily implemented, imbuing each scene with a kind of stuttering, staccato effect that kills any potential for the film to build momentum and suspense.

Characters and ideas are brought up and never explored. Symbolism abounds but never seems to amount to anything. (I still have no idea why Virginia Madsen is even in the film.) There’s something buried there in the fits and starts and gasping dialogue and goofy mythology, but it’s almost impossible to know what that thing is (if anyone figures it out, let me know, please).

The first half of the film slouches by while characters impart seemingly important pieces of exposition, and then, suddenly, as if coming to the realization that it has lost the race by a mile but must give the appearance of a strong finish, Dune sprints to a completely contrived and hackneyed end, betraying even its own sense of itself.

Dune is like a punk band that hisses and spits and sticks its middle finger up at the crowd only to apologize and slink off the stage at the end of the show.

As an adult cinephile, it’s hard not to watch Dune and feel at once disappointed and grateful that something so ambitious and strange and flawed can exist in the world of cinema. The thought that someone actually funded this beautiful monstrosity and audiences spent money to look upon its twisted form is somehow perverse and encouraging at the same time. And there’s something to be said about a big budget genre film abandoning the dogma of Hollywood blockbuster filmmaking in an attempt to do anything different.

Dune is deeply flawed, roughly hewn, and full of inexplicable quirks, but it harkens back to a time in mainstream cinema when even the most disastrous of failures could be looked back upon with some appreciation. And that’s not nothing in a time when genre movies rarely stray far from the safety of formula.