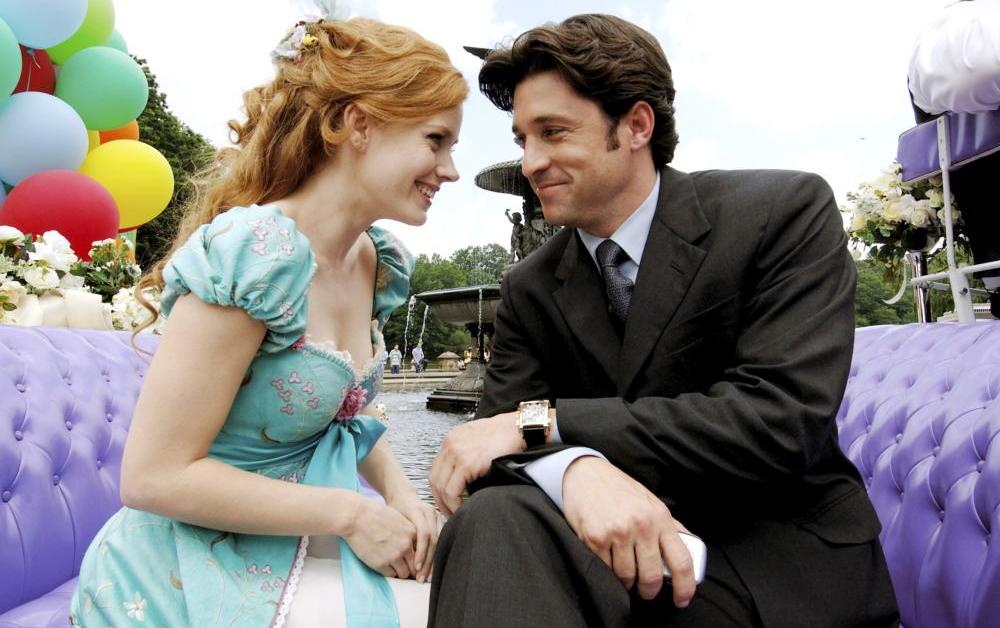 In the animated, fairy-tale world of Andalasia, a beautiful, fair maiden named Giselle (Amy Adams) waits for her prince, surrounded by devoted woodland animals, including her best friend, a chipmunk named Pip. Meanwhile, evil queen Narissa (Susan Sarandon) keeps her stepson Edward (James Marsden) distracted from the pursuit of true love’s kiss by sending him off on troll hunting missions with her servant, Nathaniel (Timothy Spall).

But, as luck would have it, one of those troll hunting afternoons leads Edward to Giselle, and after Edward rescues her from a troll, the two plan to marry the very next day. Knowing that she’ll lose the crown as soon as Edward marries, Narissa turns herself into an old hag and approaches Giselle on her wedding day and pushes her down a magical well that sends her straight to Times Square in New York City.

Now Giselle, fully human and three-dimensional, has to adjust to life in the real world as she waits for her prince to come to rescue her. Roped into helping her is a jaded divorce attorney named Robert Philip (Patrick Dempsey) and his young daughter Morgan (Rachel Covey).

Amy Adams crushes it as a Disney princess brought to life. The wistful optimism, because she has no idea what anger feels like as an emotion, the belief that true love conquers all and more importantly, the ability to break into song in the middle of Central Park and have dozens of New Yorkers join in. To us, of course, Giselle would come across as someone who might have escaped a psychiatric ward, but she’s just so earnest and charming that it’s impossible to not like her.

The rest of the cast is just as marvelous. Sarandon spends a lot of her time as an animated character, but she is deliciously wicked when she brings Queen Narissa to New York to dispatch of Giselle once and for all. James Marsden drew the most laughs for me. He took the role of the vain, but kind-hearted prince, and ran with it. If he hadn’t devoted himself fully to the ridiculousness of it all, I think the role would have completely fell flat. Thankfully Marsden nailed it.

If you ask me, Dempsey has the toughest role to play. The straight man to Adams and Marsden. He has to stay grounded, even as animals are cleaning his apartment, even as Giselle is running through Central Park singing about love. Even as a dragon attacks him in the middle of a ball. He doesn’t get to ham it up on-screen like the others, but he’s definitely the character that keeps the audience grounded, reminding us that this isn’t a fairy tale world. It’s New York, and love does not come as easy there as it does in Andalasia.

Given this is both a self-parody and a tribute to the Disney Princesses that have come before it, I loved seeking out the various nods to those films and characters. From the obvious ones, like Queen Narissa turning into a giant dragon ala Maleficent in Sleeping Beauty, to the smaller tributes like Robert’s girlfriend, Nancy Tremeine being named after Lady Tremaine, Cinderella’s wicked stepmother. There are also quite a few cameos by actresses who have voiced Disney characters in the past.

One of my favorite things about Enchanted is that it doesn’t stick solely to the general fairy tale conventions. It’s about love, yes, but it’s also about Giselle’s growth as she adapts to the real world and becomes a fully realized person. She learns to feel more than just dependence on someone who can save her. Giselle begins to think for herself, to feel things like anger and true sorrow. A lot of that initial wide-eyed innocence is lost, but she becomes a better person for it. Honestly though, who would want a sword-wielding prince with amazing cheekbones when one could save a single dad burned by love who looks like Patrick Dempsey?

Enchanted is a delightful family film. It balances the outdated fairy tale rules with a more modern look on love quite well and keeps things light and humorous with some really fun, if somewhat forgettable, songs. This is definitely a movie that will become, if it’s not already, a Disney classic.