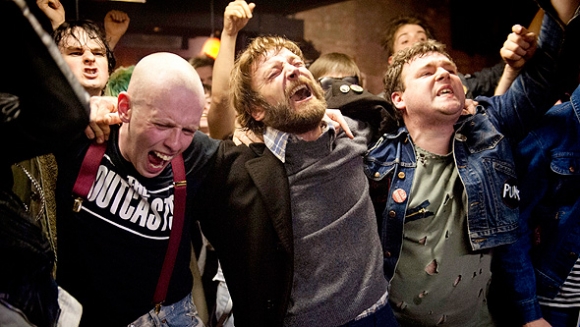 As Screenage Wasteland hits it’s one year anniversary I wanted to review something close to my heart. A natural choice was to pick a film based in the country I’ve lived my entire life, Northern Ireland. While there are a plethora of films set and made in my little country, most focus solely on ‘The Troubles’ (a violent political conflict in Northern Ireland that occurred between 1968 and 1998). Hunger, 71 and In the Name of the Father are a few that spring to mind. However, I decided to pick Good Vibrations, which does something a little different. While the troubles are certainly part of the story, they play out in the background as the focus is on the real-life story of Terri Hooley, a record-store owner instrumental in developing Belfast’s punk-rock scene. It’s an approach that works wonderfully.

Terri Hooley is a bit of an enigma. At the height of the Troubles he decided to open a record store (called Good Vibrations) on what was known as the most bombed half-mile in Europe. He had an incredible passion for music and a naturally rebellious nature. Hence the decision to open said record store. He also stayed away from politics and religious differences, something which was pretty rare at the time. Good Vibrations is an intimate portrait of the ups and downs of his life.

The film starts out as Hooley, played by Richard Dormer, is DJing in an empty pub. At this time in Belfast people were fearful to be outside their homes at night. This didn’t stop him at least trying to live a normal life, at the same time encouraging others around him to do the same. He goes on to open his record store and one thing leads to another as he soon realises there is a thriving underground punk scene in Belfast. More importantly, it’s a scene that seems to focus solely on music, with religious denomination irrelevant to those involved. He is understandably taken aback and dives headfirst into this world, eventually starting up his own record label in order to promote local bands regardless of political alliance. He finds a link between the feeling of discontent in the country at the time and the defiant nature of punk music. As he states:

“When It comes to punk: New York has the haircuts, London has the trousers, but Belfast has the reason.”

This all sounds good but Hooley is far from the perfect role model. His life is chaotic and the film does a great job of looking at his flaws. From battles with alcohol and mismanagement of money, to neglecting his wife and newborn child. Dormer is fantastic at portraying a full spectrum of emotions. His enthusiasm jumps off the screen and for better or worse, you just can’t help rooting for his character. Jodie Whittaker does an excellent support job as well. As Hooley’s wife, her patience is really tested and she wants nothing more than to settle down with her husband and lead a normal life. Hooley’s passion for music makes that an incredibly difficult job and even though she is essentially trying to pull her husband away from doing what he loves, she never comes across as anything other than a loving wife who you can’t help but feel sorry for. This is largely down to the excellent script from Colin Carberry and Glen Patterson, which manages to perfectly balance dark humour with the serious tone that was needed. It really captures the anarchic spirit of the time.

A critical moment in the film, and in Hooleys life, comes as he is trying to get the (now) well-known song Teenage Kicks by The Undertones out into the public ear. John Peel, known as one of the most influential radio DJ’s in British history, agrees to play the record on prime time radio. He likes it so much he plays it twice in a row, something he had never done before. What could have been a corny moment is delivered superbly, as Hooley and his wife listen on from home via the radio. Even though I personally knew what was coming, the scene still gave me goosebumps. And maybe brought on a tear or two as well.

As I mentioned earlier the Troubles in Northern Ireland are not the main focus here, but they still have a dark undercurrent throughout the film. Hooley has to deal with both sides of the conflict as he is seen as an enemy by some and traitor by others. Although Good Vibrations is set a decade or so before my time, I still experienced my fair share of the difficulties that ran on in Northern Ireland until 1998. From a personal viewpoint, I can’t give any higher compliment than to say Good Vibrations does an amazing job of giving an unbiased and fair representation of the country and political difficulties experienced by many. It might not have been a pretty state of affairs but the story at the centre of this film shows that there were pockets of hope and light in an extremely dark time.

As demonstrated in Good Vibrations, music can help us escape the ugliness of tribalism. Just like movies and other forms of art, they can all be used to build bridges. Especially with the younger generation. We currently live in troubling times all around the world but a film like this shows that by coming together through a mutual love of art, some of life’s problems can be overcome. And if you just want a film to warm your soul then Good Vibrations comes highly recommended.