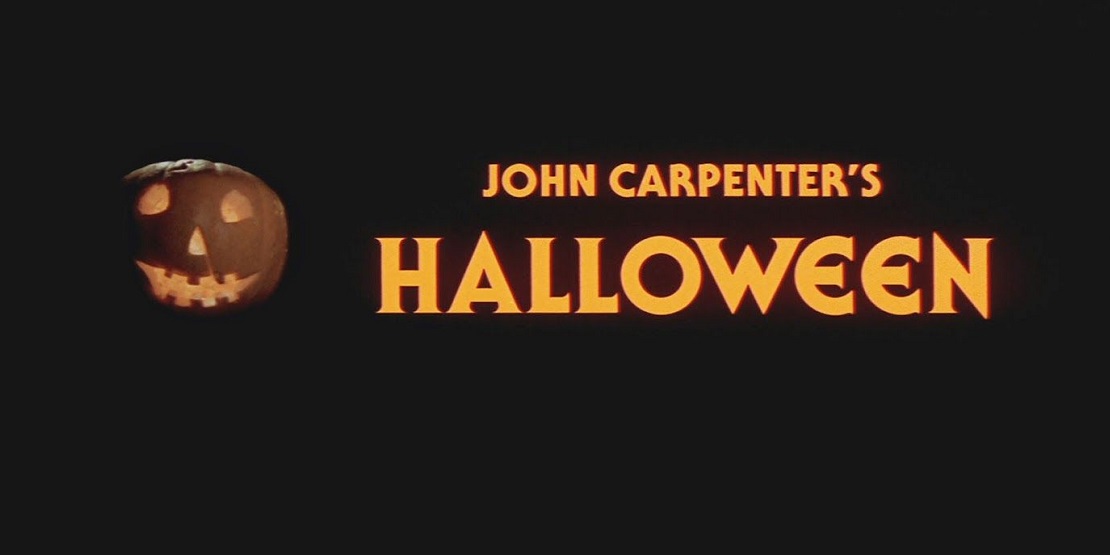 As we come to the close of the first 31 Days, 31 Horror Movies here on ScreenAge Wasteland there was really only one film I could choose as the last.

I didn’t see Halloween until the early 90’s. By that time the template it created had been used so many times that I was bored to death watching it. I’d already seen innumerable slasher films with a deathless protagonist, a menaced string of promiscuous teenagers killed in gruesome ways and a pure ‘last girl’ protagonist who managed to stop the unstoppable. The pacing was glacial, the gore nonexistent, and the killer mostly stood around staring into windows like a Peeping Tom. 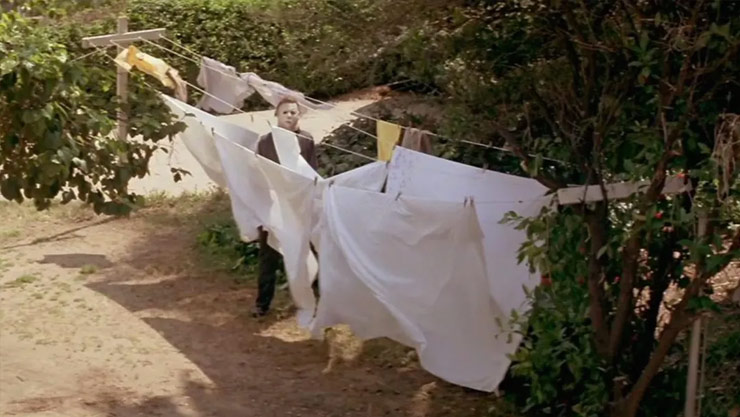 So I filed it away as a bad movie with a good reputation and didn’t see it again until sometime in the early 2000’s.

And watching it again was a revelation. Astonishing. Like watching a completely different movie. Maybe it was because I had stopped watching slasher films years before or maybe it was just that I was able to enjoy the film as a whole instead of looking for moments that would have been featured in Fangoria. For whatever reason I found myself sucked in to  the dark streets of Haddonfield on October 31st, 1978, rooting for Loomis and Laurie Strode to survive the night.

Halloween has since become one of my favorite horror movies and it’s inspired me to re-examine many an older film that I had written off in my younger days. Tastes change, WE change, and sometimes it’s worth taking another look at something you’ve written off. Maybe I’ll even give the other Halloween films another shot one of these days – I only ever got as far as Halloween V: The Revenge of Michael Myers  before giving up. (I do love Halloween III, as flawed as it is, but it’s not a Myers mythology film so I don’t really include it in the list.) 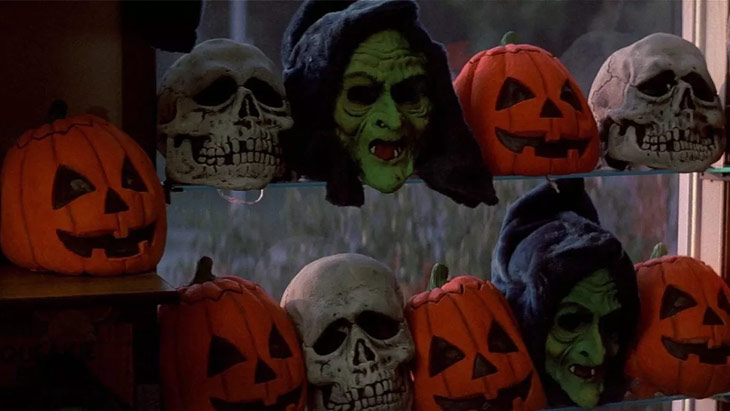 Halloween shows up on a few lists around ScreenAge. Check out the ultimate top 10 of Vincent Kane‘s 100 Greatest Horror Movies, Saint Pauly‘s comparison of the original film with the 2018 release, find out Michael’s place on Sailor Monsoon‘s 100 Greatest Movie Villains list or have fun with Marmaduke Karlston’s So You Think You Know Halloween quiz.

The Medium
I’ve got the 35th Anniversary DigiBook Blu-ray from Anchor Bay. In addition to the film itself – which is the best I’ve ever seen it – the package includes an introductory booklet and a smattering of decent extras. I believe there was a 4k version released recently, but as I don’t have 4k setup I don’t know if it’s worth it or not. (The included Blu-ray is substantially the same as the 35th anniversary version.)

For streaming Halloween is on Shudder for subs and the Roku channel (with ads). Also on Fubo (seriously, what is that?) and for rental on Amazon, Apple and Flix.

The Movie
It’s hard to talk too much in depth about a film you love, and that’s especially true when it’s a film that’s as much a classic as Halloween. So I’m probably just going to ramble a bit on the things that I like and things that stuck out to me on this viewing.

I’m sure everyone knows the plot, but just in case: a six year old boy named Michael Myers kills his sister (after she trysts with boyfriend) on Halloween. 15 years later he escapes a mental institution and returns to his home town and begins stalking and killing a group of teenagers. His doctor pursues him to the town, trying to stop the person he no longer thinks is even human. 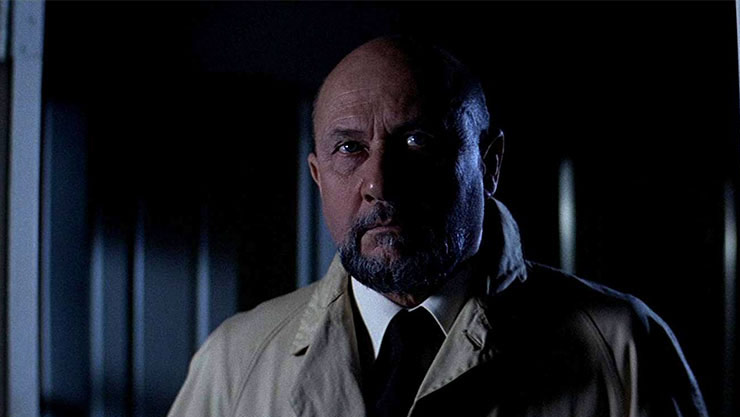 I love the long tracking shots through an almost empty suburbia. Combined with the iconic music the effect is one of turning familiar places into scenes of menace. I like the mask, and the way it’s never shown in close-up during the day. (Those long-shots of him standing next to the car or the hedge are some creepy-ass shit.) I like the way that Michael always seems to pause for a long time before killing anyone, but that when he gets down to it he’s almost impatient. Many times he starts to strangle someone, then seems to get bored and just stabs them. I like the way Loomis refers to him as ‘it’ and is living in constant fear.

If you read my What Halloween Means to Me installment you know that I also love dusk, and so I wish there were more scenes set as the sun goes down. There’s really only Laurie and Annie’s drive through the maze-like suburban streets with Michael following them. It’ s just a personal thing, but I would have loved to see Michael just waiting as the sun went down. Waiting for the dark. 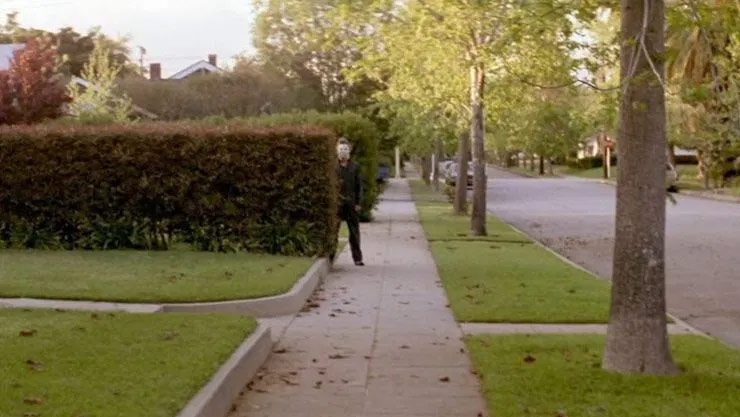 Scenes I found slow back when I first watched the film are now full of both character development and lingering menace – Michael is always there, always present. Even when he’s not in the shot I found myself looking for him, wondering where he was. The main female characters and dialogue are pretty realistic – a result of letting producer Debra Hill write their scenes. Loomis’ doom and gloom pronouncements are more over the top, but Donald Pleasance sells them so well you don’t care. If you or I pronounced someone as the personification of evil we’d be laughed at – but when Loomis says it you’re ready to believe. 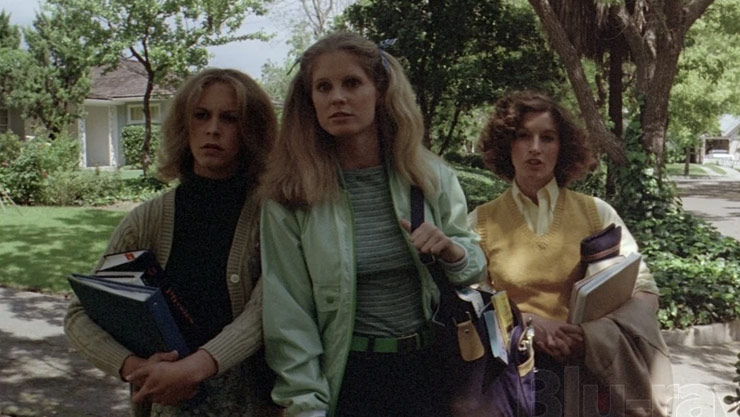 There are no lingering on kill shots, no “look at how realistic this stab to the head is” – the deaths are almost matter-of-fact. There’s very little in the way of gore. The real terror is in the stalking beforehand. When Laurie backs into the hall after discovering her dead friends and that mask slowly materializes out of the darkness behind her – that’s my favorite scene. There’s a patience and inevitability in Michael that’s disturbing. I always preferred Jason from the Friday the 13th movies as a teenager, but his inevitability is that of a freight train bearing down on you. Michael’s is more like that of death itself, slow, patient, and certain. Jason (or Freddy or any of the others) is happy to chase you wherever you go, and that’s frightening. Michael has taken the time to lock and bar the doors, so you’re not going anywhere. And that’s terrifying. 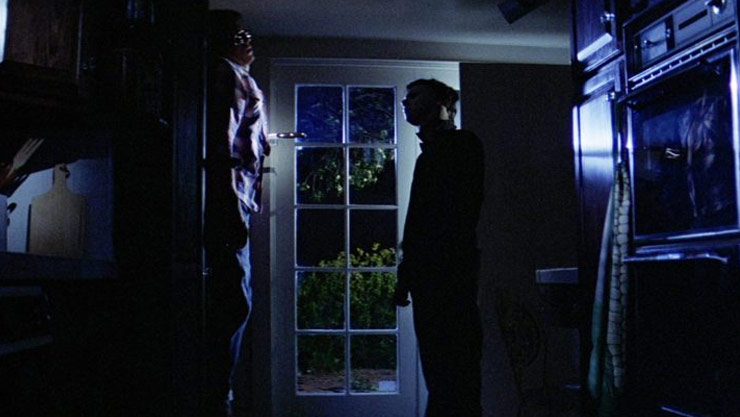 I found myself paying attention to little things this time around – like the the way Loomis finds he actually enjoys scaring kids, the movies the kids are watching (The Thing From Another World and Forbidden Planet in particular), Laurie’s literature class question about fate, and the way the neighbors refuse to help her. The leaves blowing through the scenes.

Another thing I noticed this time around is that I like the way Carpenter films in the daylight. I hadn’t thought about it before, but most of his movies seem to take place at night or inside. It’s too bad, because he shoots great outside sequences – managing to find horror right in the bright sunshine.

The Bottom Line
There’s so much that’s iconic about Halloween – the music, the ‘teenage’ protagonists, the almost featureless mask (of William Shatner’s face), and of course that final missing corpse. Many a filmmaker liked it enough to copy it almost wholesale. The mask that launched a thousand dead teenagers. I wish I had seen it early on, as I would have appreciated it as the godfather of all those films – as much the antecedent of the modern horror film as Night of the Living Dead and The Exorcist.

And that brings us to the end of 31 Days, 31 Horror Movies for 2019! Thanks for reading along. I hope you enjoyed it – I know I did, even when I struggled to find something interesting (or merely coherent) to say about what I’d just seen. See you next year! (And tomorrow – for Fear Flashback!)