Just like how every script has a three act structure, every film that involves a hero on a quest can be broken down to these twelve elements. But that doesn’t mean that each step is important. The formula may be ironclad but there’s one step that’s far more crucial than the others and that’s step six: Tests, Allies, and Enemies.

The hero can be uninteresting and the quest uninspired but if your villain is lame, nobody will give a shit. The hero is only as memorable as the villain he’s fighting. James Bond is one of the most iconic characters ever but the only films anyone gives a shit about are the ones where the villain is amazing. From the mustachio twirling, train track tying ne’er-do-wells to mask wearing slashers to universe destroying uber baddies, cinema has had a long love affair with evildoers but which one is the most dastardly?

These are The 100 Greatest Villains Of All Time. 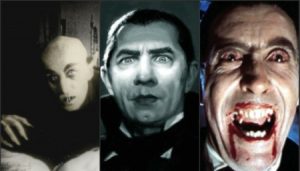 There have been multiple iterations of Dracula over the years. Some sympathetic, others have been monsters. He’s been comedic and other times an action star. With the exception of maybe Sherlock Holmes or Ebenezer Scrooge, there isn’t a character with more adaptations than Dracula. There’s something about the cape wearing blood sucker that audiences never tire of seeing.

Bela Lugosi set the mold (although it could be argued that Max Schrek was the first because of lawsuits and what have you but I don’t feel like arguing semantics) and others have either copied, added to or reinvented over the years. Oldman borrowed aswell as added to, Lee made him more ferocious, Langela made him sexy and Regehr was the first to unite all the monsters. He’s a villain that will be around forever and everyone has their favorite. 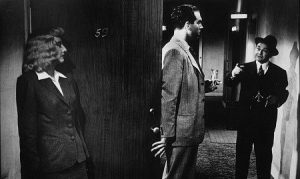 There have been no shortage of awesome weapons villains have possessed over the years. Pinhead has his flesh tearing hooks, Oddjob has a razor sharp hat he uses to decapitate his foes and each baddie of the MCU all somehow possess an all powerful infinity stone. If a villain is defined by their tools of destruction, Phyllis Dietrichson commands the most power weapon ever created: sex.

She uses sex to manipulate and destroy all in her path. She’s the reason most female villains are femme fatales instead of axe wielding psychos. Because to quote Closer, “Lying’s the most fun a girl can have without taking her clothes off – but it’s better if you do.” Dietrichson’s lie is the promise of love and sex and money and she delivers nothing but death.

A machine, by they’re very definition, can hardly be considered a villain. Even if that machine is a computer with an advanced AI, as long as they are performing their duties without malice or emotional bias, they can’t be blamed for their actions. You don’t blame a knife for cutting you or stove for burning your hand but it’s that lack of empathy that makes Hal so chilling.

There’s a theory that he gets corrupted and goes mad but the film doesn’t support this. He isn’t mad, he’s logical. He’s determined that the mission should no longer be accomplished, so he sets out to sabotage it. Skynet had to create millions of robots that took over the world to be considered an ultimate villain. Hal just had to refuse to open a door. 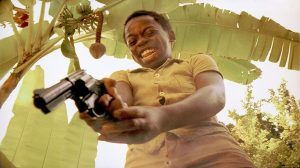 I almost considered putting him on the list twice. Once as a kid and the other as a young man. While not being drastically different in behavior, the two have vastly different types of motivation driving their crimes. The boy murders anyone he sees indiscriminately with the slightest provocation. He kills because killing is fun. He’s not doing it for fame or profit, he simply enjoys the act of murder. His systemic slaughter of an entire hotel is arguably the single most cold blooded act any child has ever committed on film. If Rhoda Penmark is considered a “bad seed” for killing a couple of kids for shoes and trophies, Lil Zé is a bad orchard.

And that’s just flashbacks. His time as a kid, is less than 20 minutes of the film. The bulk of the film is Lil Zé as a young man and with age, comes maturity. Gone are the days of being a homicidal lose canon and in its place, the days of being a homicidal loose cannon but with ambition. He still kills anyone he wants but now he has a goal: to take over the titular City of God.

Fun Fact: this film is based on a true story. 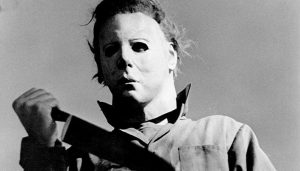 After viewing Carpenter’s film Assault on Precinct 13, independent film producers Moustapha Akkad and Irwin Yablans approached the director with a film idea about a killer that stalked babysitters. After writing the first draft titled “The Babysitter Murders“, Yablans suggested the film be set on Halloween. He rewrote the script and with a new setting and title, Halloween was officially born. I wonder where cinema would be if Yablans didn’t suggest that change or if the prop department went with a clown mask instead of a 2 dollar William Shatner mask.

The gods of cinema must have been shining on Carpenter (which, if you know his career, is deeply ironic), because every element some how worked. He somehow overcame his budgetary limitations to create one of the most important horror films in existence. And it’s all due to the success of Michael Myers.

We are given a flashback to his childhood but never a backstory. The only explanation given in the film to account for his murderous behaviour, is during Loomis’s monologue:

“I met this… six-year-old child with this blank, pale, emotionless face, and… the blackest eyes – the Devil’s eyes. I spent eight years trying to reach him, and then another seven trying to keep him locked up, because I realized that what was living behind that boy’s eyes was purely and simply… evil.”

Tommy was right, he is the boogeyman. 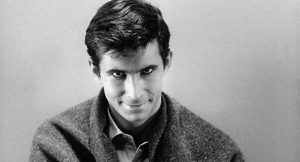 The third villain on this list based on serial killer Ed Gein, Bates isn’t as scary as Leatherface or monstrously cruel as Buffalo Bill but he might be crazier than both. Over the course of four films, we learn more of his backstory, which makes him more of a tragic victim born from an insane mothers wrath but that’s just subtext. It adds to his character but it doesn’t detract from his insanity.

Whether we the sequels existed or not, everything we needed to know about Norman is in that first film. He tends to a motel, has an odd relationship with his mother and people end up dead. With the final reveal, we realize how insane he truly is and no amount of backstory will change the fact that he dresses up like his mother and hacks people to death.

And the slaying of Marion Crane in the shower, might be the all time greatest death in cinema history. 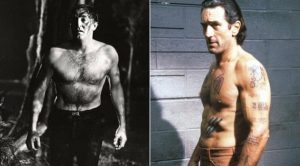 Mitchum’s Max Cady is the epitome of creepy. He’s a lunatic with a singular obsession: terrorize the family of his former lawyer Sam Bowden by any means necessary. He’ll hunt them down and terrorize them until he’s put down like a rabid dog. The film is quite tame by today’s standards but it was shockingly progressive in its day. Psycho was the only other film that pushed similar envelopes but Norman Bates only wanted to kill “dirty women”, it was explicitly stated that Cady was going to defile the women and then kill them. He was a brute.

De Niro is a horse of a different color. If Mitchum talked the talk, De Niro most certainly walked the walk. He’s a madman that will destroy every one and everything associated with his target of vengeance, including his underage daughter. The scene between De Niro and Lewis (you know the one), is still shocking almost 30 years later. 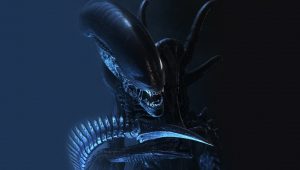 When you think of the Xenomorph in the first Alien film, your mind conjures up all of these images of the alien stalking the crew and killing them in various ways but the Xenomorph is the greatest villain with the shortest amount of screen time. People complained that there wasn’t enough Godzilla in the 2014 reboot but nobody ever complains about the lack of Xenomorph in Alien. Because even though he’s in it less than half of the time, every second matters.

There’s nothing more terrifying than the dread, the anticipation of seeing something and that’s the brilliance of Alien. You barely see the monster but the escalation of dread makes you think he’s always there. The sequels added different versions, that were faster and stronger but nothing beats the originals design or the fear it creates. 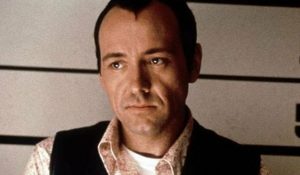 “The greatest trick the devil ever pulled was convincing the world he did not exist.”

At the end of the film, you’re left wondering how much of what you saw was the truth, how much of it was a lie or whether it was Kint or “Kobayashi” that was actually pulling the strings as Keyser Söze but it ultimately doesn’t matter. What matters is that he tricked you. The entire movie was charade to blindside with the twist and what a twist it was.

The film is a terrific bit of myth making. He’s the boogeyman of the criminal underworld not due to anything particularly heinous but by being a terrific storyteller. He’s spun a story involving this mythical bad guy and all he has to do is occasionally spill some blood to keep it going. 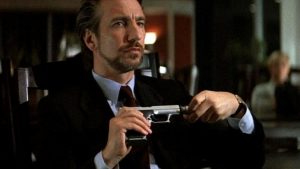 The brilliance of Hans Gruber, and why he’s such an enduring villain, is the fact that he’s always the smartest person in the room and the film has no plot contrivance in order for McClane to win. Gruber doesn’t lose because he does something stupid, he’s always one step ahead and in turn, that makes McClane more heroic by osmosis. He saves the day by being just a tad more clever than Gruber and in a genre where every film ends with the protagonist and antagonist punching each other to death, it’s still a rare and refreshing to have a film end with the hero outwitting the villain.

But the intelligent thief we all know and love, almost didn’t happen. In the original script, Gruber was written exactly like William Sadler’s character in Die Hard 2. A no nonsense professional that rules with an iron fist but once the producers saw Rickman’s audition, they quickly rewrote the script to cater more to his intellectualism and low key charm. His performance blew the doors open for every character actor in England because after that film, every action film needed a posh Englishman doing villainous things and the moment that stopped happening, action films went downhill immediately.