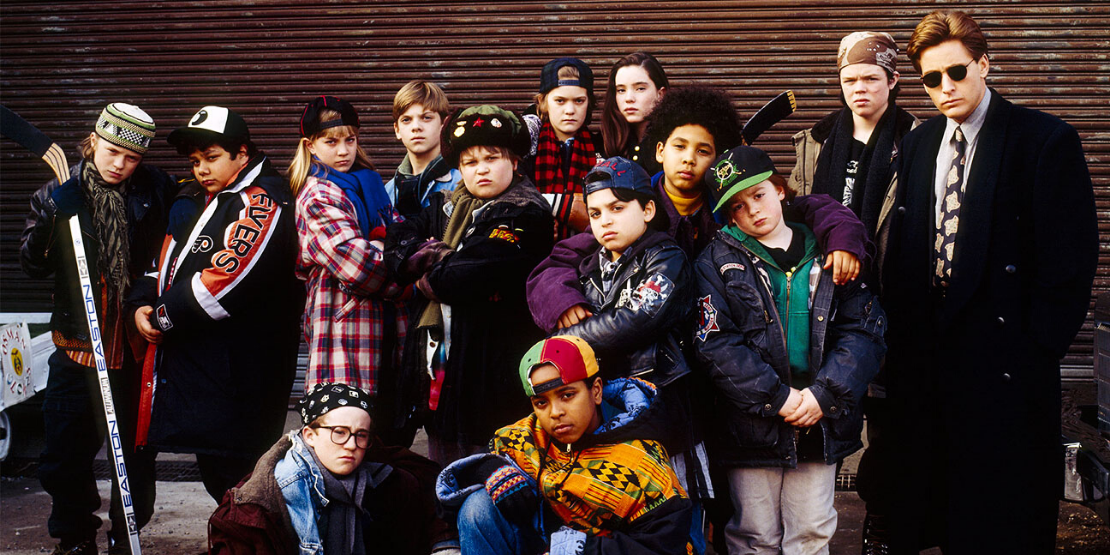 The thing about nostalgia is that it can be a fickle mistress. Movies we loved as a kid are etched into those protected corners of the heart; where we place our favorite memories, jokes, and formational moments. They influence our tastes as much as they entertain. But there are those titles we were so sure would stand the test of time and they simply don’t. Nothing takes wind out of the sails like revisiting a childhood favorite years later to find out it is, in fact, terrible or at least comically entertaining for all the wrong reasons. Perhaps that’s what makes the great ones so great–the ability to hold up decades later; where we throw a victorious fist bump and say, “Yes! That was awesome!” Nostalgia, when it clicks, is validating.

Maybe that’s why I’m so passionate about The Mighty Ducks. Because, for me, it’s more than mere entertainment. Charlie Conway, Jessie Hall, Les Averman, Fulton Reed, Goldberg (and his gas), Connie + Guy (pronounced “Gee” so get it right) and even the cake eater Adam Banks are my squad, the athletic crew of misfits that defied the odds and made the impossible possible while taking me along for the ride. In the world of mid-90s family sports flicks, a pee-wee hockey championship was a huge deal and you can bet your paycheck I bought-in hook line and sinker. With newly redeemed Gordon Bombay at the helm and the Scandinavian sage Hans, adolescence didn’t just feel fun it felt meaningful. There’s something uniquely campy yet deeply grounded about the quack-attack that feels perfectly nostalgic but incredibly relevant still today. That’s what makes The Mighty Ducks magical. We’ve seen our fair share of superficial, thinly-veiled sports movies many of which carry the Disney banner.  But here, with the Minnesota miracle man completing community service hours with the oft-forgotten District 5 hockey team, we’re launched into the stratosphere of fun, self-aware, timeless entertainment. Dare I say, The Mighty Ducks isn’t just a solid sports flick that got the Disney treatment … It is a great sports movie, period.

Of course, the trilogy carried on in needless fashion. Both D2 and D3 have their moments (long live the Bash Brothers!), but it’s not newsworthy to say the inaugural installment is the gold medal winner. That’s why, when we speak of legacy and the potent influence of nostalgia it’s important to consider the first chapter as a lone accomplishment. In a vacuum, our first venture with Coach Bombay and the Ducks most certainly earns placement in the pantheon of childhood classics alongside The Goonies, Hook, The Neverending Story, The Sandlot, and others. Yet, even in that mix, you could make the case the Conway led misfits taking down the defending champion Hawks is more monumental in cinematic excellence than the others.

Am I getting carried away? Perhaps I’m drunk on nostalgia, I’m not one hundred percent certain. But I do know this, the movie holds-up and is every bit as fun to watch in my 30s as it was in my formative years. Which brings us to the question at hand:

Is The Mighty Ducks a perfect sports movie?

Before attempting to answer such a bold (or ridiculous?) question, we have to establish measurables. How do we quantify a perfect sports flick? Glad you asked.

For the sake of this exercise, I’ve broken it down into three categories: Story, Sports Sequences, and Rewatchability. In order to earn the label “perfect” it’s got to perform well in those categories. I’ll give a brief break-down of how the Disney-hockey-magic stacks-up and give it a score from 1-10, with 10 being the highest. It’s an imperfect and albeit biased system, but it’s the best I got for right now so let’s roll with it.

Since this one comes from the mansion of mouse, there are only so many colorful moments permitted (unless it’s Who Framed Roger Rabbit). The flick has to maintain its family-friendly status afterall. All that said, The Mighty Ducks packs a surprising amount of depth in the thick of its mid-90s antics. At its core the narrative is one of personal redemption, loss, and acceptance. Gordon Bombay runs the gamut of emotions in the tight 104 minutes. From the loss of his father to costing the Hawks a championship; from top-of-the-world big-shot lawyer to a drunk driving charge and oodles of community service; running away from his past to be face first with all the trauma again; asked to deliver mission and purpose to a group of forgotten pre-teens; and to carry the burden of piecing his life back together. Maybe a touch campy, but to say the hero’s journey hits all the notes here is an understatement. Bombay is a haunted man; haunted by ghosts of failure, disappointment, and terrible circumstance. The weight he carries is hefty and real. Honestly, the dude could’ve used some therapy.

When Coach Reilly and his popped-collar deliver that notorious line, “You’re not even a has been…you’re a never was.” damn that cuts deep for any movie let alone a Disney standard. Which speaks to the subversive current throughout. The Mighty Ducks is as much a commentary of classicism as it is a fun hockey romp. The forgotten kids of District 5 are the affluent, working-class sector of the city; with the Hawks representing the white one-percenters. With the whole subplot of Adam Banks switching sides, Reilly’s savage coaching, and the genuine heart in the Duck players–we find a surprising level of astute observation underneath the surface of this family comedy. It represents diversity and equal opportunity to a fairly healthy degree, or at least as much as 90s Disney was willing to go.

Then, of course, thank goodness for Hans. If any fictional Disney character deserved the title of sainthood, it’d be him. I mean, watch this scene and tell me it’s not genuinely human and impeccably cinematic.

“Teach them them to fly! That is what they’ll remember long after you’ve gone back to being a doctor … and long after they’ve stopped buying skates from me.”

*sniffles*  Yep. You are so right, Hans. So, yeah, The Mighty Ducks may be a fun, nostalgic experience, but it’s got the depth needed to deliver a full arc of character evolution, adequate commentary, and triumph. Not bad for a formulaic Disney flick, right?

Listen, I’m not a hockey player. The last time I strapped on roller blades for a round of blacktop puck was around Y2K. But, I went through seasons of life where I was an avid hockey fan (go Sabres!), and I must say, the in-game sequences captured on film here are superb. The color commentary (why is this a thing in pee-wee hockey?) is slipped seamlessly over the action with the right moments of swelling score to pump our blood just enough.. And to be honest, the editing and camerawork may serve as a masterclass in sharp cutting in sports storytelling. Between the visuals and surprisingly high-quality play-by-play, we’re grounded the whole time; completely aware of where we are and in what placement of the game we set. That’s no small thing. Capturing realistic sports sequences, even with the highest of budgets, is a tall order. Numerous movies have tried and failed in that light.

And lest we forget this epic in-game innovation …

Okay so the Flying V may not be very practical, but in the arena of Disney magic it works. Every sports movie needs a signature play, or moment, or team thing. The Flying V is certainly one of the more creative we’ve seen. Ridiculous? Absolutely. Endearing? Most definitely. Considering we’re watching a bunch of 11 and 12 year olds play “competitive” hockey, the games feel real; the key moments earned; and the emotional notes built in classic fashion. The game sequences are every bit as thrilling as they were when we watched them for the first time in 1992.

It probably says more about me than it does the film, but I rewatch The Mighty Ducks annually for a myriad of reasons. The power of nostalgia, as we mentioned before, is its own special kind of euphoria; the lessons learned are timeless; the hockey action is top-drawer; the quacking; the Averman jokes; the sinister Coach Reilly, all of it creates an atmosphere that lends itself to multiple views as a kid and beyond. Not to mention I’m a sucker for a good personal redemption story. Coach Bombay came a long way and that means something.

When comparing this one to some of its counterparts, it’s easy to pick apart those few moments of imperfection within each of our childhood favorites. The Goonies has pacing and characterization issues; Hook is sort of a bloated mess as times; The Neverending Story is nightmare fodder; the third act in The Sandlot feels almost like an entirely different movie from the rest; and just how plausible is it that tightened arm tendons could really turn a teenager into an MLB pitcher? But when I consider The Ducks, it’s harder to pinpoint moments I’d change or edit. Because at its heart, the film knows exactly what it is and it delivers in full-hearted fashion. With high quality filmmaking mechanics, a strong-enough story, and a cross-generational appeal chock full of endearing, authentic characters–you can’t help but love The Mighty Ducks. They’re here to stay and we’re all the better for it.

With a total score of 99%, it just misses the mark of perfection. But that doesn’t take away from the wonderful lasting impact of Coach Bombay and his District 5 Duck warriors. Truth be told, there may be no such thing as a perfect sports movie (outside of Hoop Dreams). And that’s okay. But one thing is certain, The Mighty Ducks–amidst all its 90s-tastic, fun-loving glory–deserves to stand on its own as a complete and utter success in the sports cinema pantheon. In this case, the Disney label doesn’t mean much because this one is not just a family flick with a unique rewatchability, it’s a flat-out great sports movie that celebrates hockey, the journey of personal redemption and the lives of good, earnest, working-class kids.

Call me crazy, but it’s the best hockey flick yet made. Or maybe that’s just the nostalgia talking, but don’t act like this movie doesn’t matter to you because, on some level, it likely does. And ducks fly together.