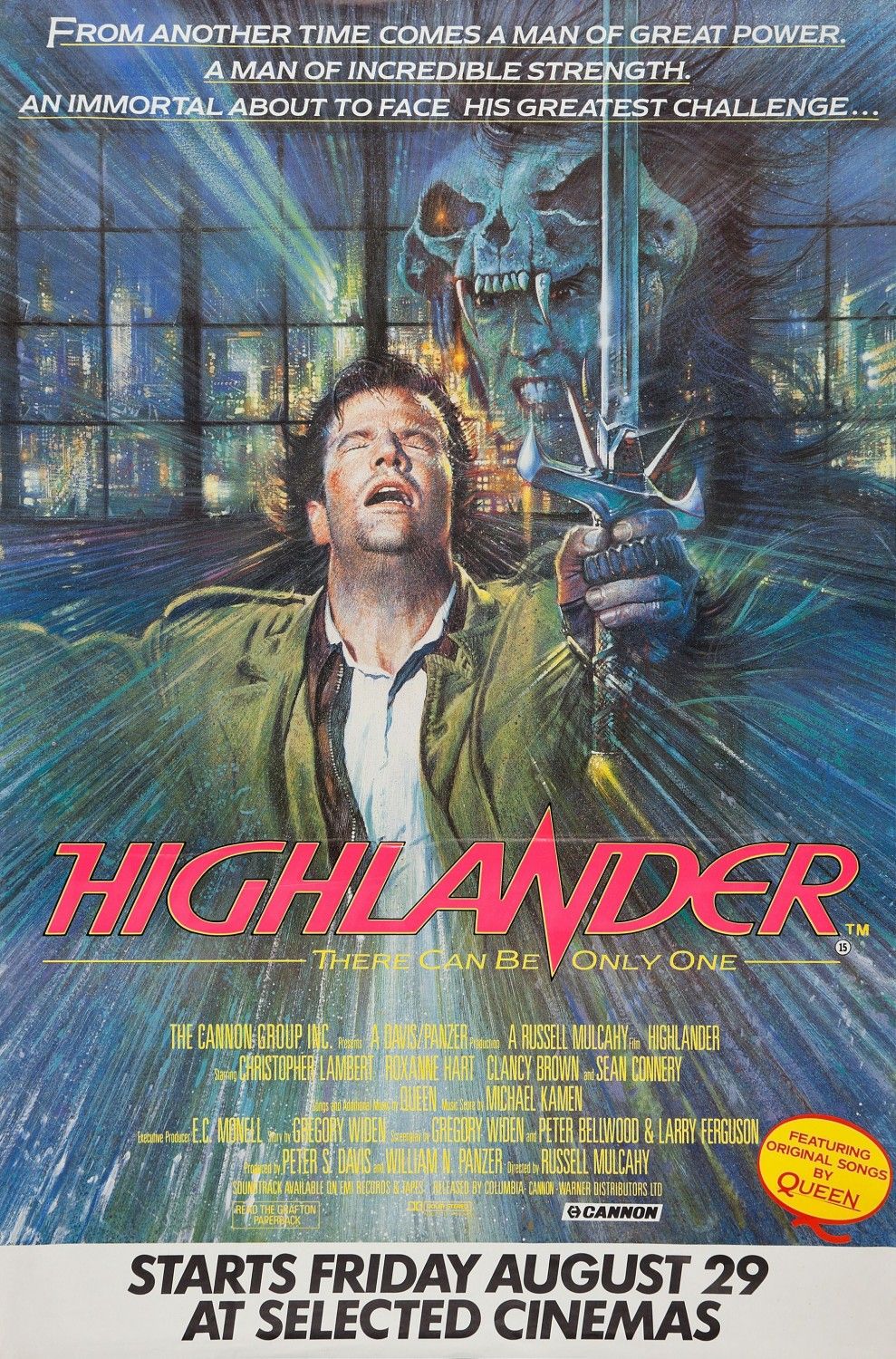 Christopher Lambert plays swordsman Connor MacLeod from the Scottish Highlands, known as the Highlander, one of a number of immortal warriors who can be killed only by decapitation. After initial training by another highly skilled immortal swordsman, Ramírez (Sean Connery), MacLeod lives on for several centuries, eventually settling in New York City, managing an antique shop. In 1985, he falls in love with a police forensic scientist named Brenda. He also finds out that he must face his greatest enemy the Kurgan (Clancy Brown), who wishes to kill MacLeod and to obtain “the Prize” – a special ability which is given to the last living immortal warrior: vast knowledge and the ability to enslave the entire human race.

Sailor: Give me a sec.

Kane: Wait. I need a drink.

Sailor: I don’t think I knew this was a Cannon film.

Sailor: Goddamn it! And I just shaved my dick. Back to full bush immediately.

Kane: We should get Duke to listen to him then.

Kane: I forgot about the wrestling opening. How about that Confederate flag robe from the sexy Michael P.S. Hayes?

Sailor: I don’t know who that is.

Kane: I love this movie but I always thought it could be better.

Sailor: I think my biggest issue with it is the structure. You don’t get to the origin till the halfway point.

Sailor: It is well directed though. I’m a fan of the director.

Kane: More neon and a better score during this parking garage fight would make this scene the tits. And less back flips.

Sailor: Did you know that Lambert didn’t know English when they hired him?

Kane: DECAPITAION! I did not know that.

Sailor: He learned all his lines phonetically.

Kane: Is James Cosmo in every Irish and Scottish movie?

Kane: He is so great.

Sailor: THERE CAN BE ONLY ONE!

Kane: One of the most quotable movie quotes of all-time?

Kane: He was busy!

Sailor: Does it ever explain why?

Kane: Does this movie explain anything?

Sailor: Why the bartender look weird while pouring that drink? Like, yeah motherfucker, I wanna get drunk. Pour that shit

Kane: Do your damn job! Now go cut some limes!

Kane: Those white kicks are one of the things I hate about this movie. Like why? They aren’t even clean. He’s rich.

Sailor: he will have to dress slick in the remake.

Kane: Kurgan will dress exactly the same. With his one sleeve leather jacket and mullet. 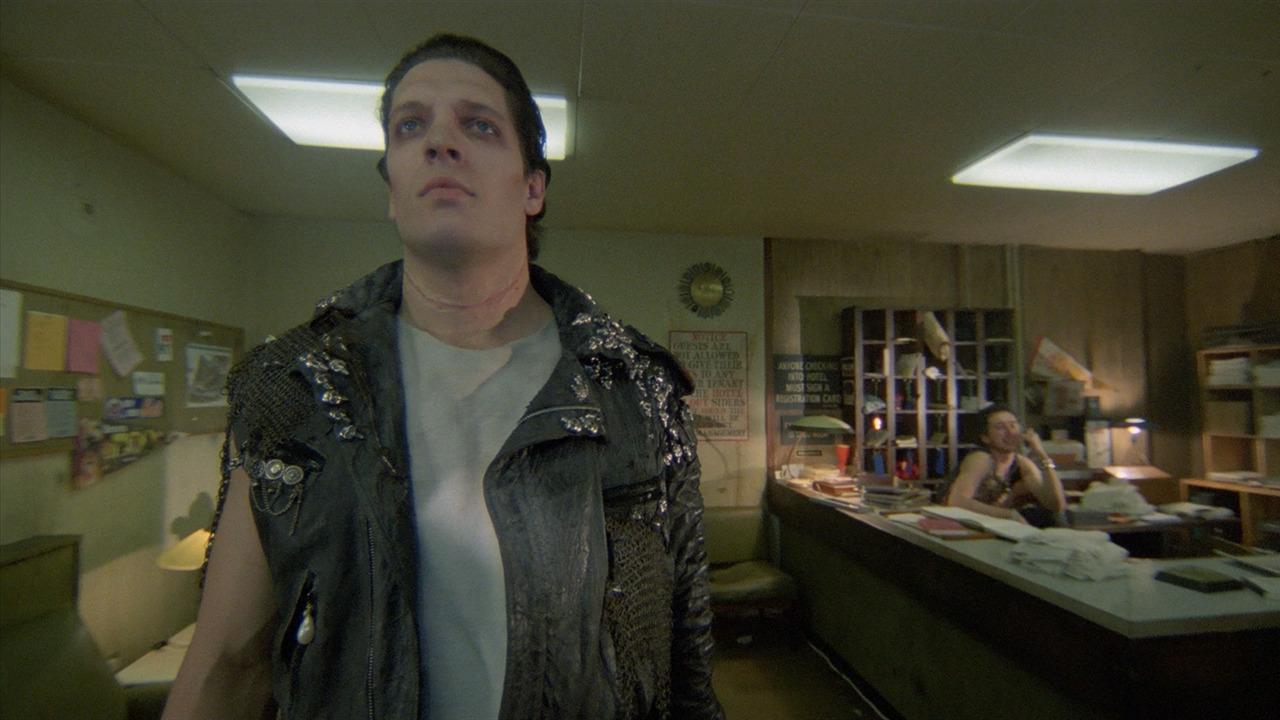 Sailor: This is honestly the most accurate part of the film.

Kane: And they say white straight men don’t know what it’s like to be attacked or oppressed. Pfft.

Kane: It’s every movie in the 80s had a competition to see which one could have the best loft.

Sailor: His loft might be the best of the lot.

Kane: it would make more sense if there was a reason or trigger for these flashbacks.

Sailor: I honestly think they structured it this way just to have the secretary reveal.

Sailor: CONNERY! He is the hardest to recast. Who can pull off playing Scottish Mexican Egyptian?

Sailor: Damn. I don’t hate that. Momoa is clearly Kurgan.

Sailor: She had ample time to leave.

Kane: Now she gonna get raped because it’s the 80s.

Sailor: There is no reason for the flashbacks! Just Wolverine Origins this bitch!

Kane: So, first part of the movie set during the middle ages.

Kane: Kurgan attacks and we get the wife dying.

Kane: Then we get a slow-motion montage of McLeod in every war set to Queen’s “Who wants to live forever” till the present day where the movie finishes up.

Sailor: I got a semi.

Sailor: What did we have the same pick?

Kane: Ok, actually we did. Crazy.

Sailor: Ragnar vs Aquaman would be the cat’s tits.

Kane: Aww, they are Eskimo brothers.

Sailor: Is that a phrase?

Kane: Have you never heard it before?

Sailor: They just let Clancy do whatever the fuck he wanted for two minutes.

Kane: I don’t know why I see Carey Mulligan as the reporter chick role.

Kane: I mean she has nice boobs too.

Sailor: No. Dammit, I mean a worse actress.

Sailor: I hate you so much.

Kane: This end fight is pretty tight but still could be so much better. Get rid of the chick intervening and a better score. It’s awful here.

Kane: Did you know this won the Academy Award?

Kane: For best movie ever made.

Sailor: Goddammit! Did you wait the whole movie just to say that?!

Kane: There is a lot of nostalgia with this film. It’s one of those movies that could have been so great with an amazing premise for a franchise. Outside of the Queen songs, Clancy Brown, and Sean Connery, there just isn’t much here to love. I feel like in the right hands, this could be a major franchise if updated correctly.

What is your impression of Highlander? Let us know some of your thoughts on the films and the franchise as a whole. Also, let us know who you would cast for a remake down in the comments.

Would you want to be immortal?

Even if you have to fight other people who wanted to chop your head off constantly?

Still yes. I could finally watch all the movies I wanna see.

I immediately regret my decision to engage with this.

You have to stay married to the same woman who is also immortal.

Ok your wife is Lena Dunham.

And if she dies, you die.

Then I’m dead because I’m chopping her head off immediately.

If you die, you have to spend eternity in hell…

I said no. “Who wants to live forever?” Not fucking me.