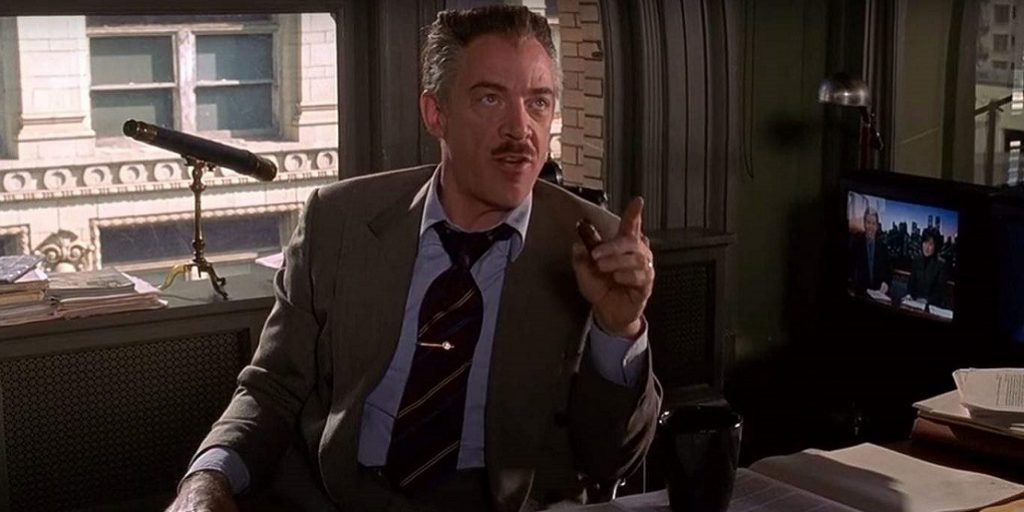 When J.K. Simmons knocked his portrayal of Daily Bugle boss J. Jonah Jameson out of the park way back in 2002, Sony and Marvel unknowingly boxed themselves into a very small corner. To many Spider-Man fans, Simmons gave the definitive portrayal of the character and any attempts at recasting could be seen poorly.

The Amazing Spider-Man 1 & 2 completely avoided any showing Jameson onscreen (the best they could do was have an email from him). Spider-Man: Homecoming avoided the issue as well, but it looks like Far From Home has the balls to introduce the world to a new iteration of Jameson.

Far From Home executive producer Eric Hauserman Carroll participated in a Q&A with interviewers and revealed the details on The Daily Bugle and Jameson’s return to the big screen:

“Yes, we’ve absolutely talked and thought about those characters a lot, specifically in reference to this film. What we just want to make sure we’re [presenting] them in a way that doesn’t make you feel instantly like you’ve seen them before. So we have a couple of ideas, some of which I can’t really go into detail because they’re spoilery, but it’s absolutely – if we had an “in” for the Daily Bugle that wasn’t just your traditional newspaper…and Peter Parker, there’s this cool, weird thing happening where being a photographer isn’t necessarily a mark of distinction anymore. We all have better cameras in our pockets than most people even owned ten years ago. So how do we get Peter or somebody into that world without it feeling like, do kids really aspire to go be photographers for The New York Times anymore? Or do they aspire to have their tweet reposted, and so on.

Carroll went on to say:

“So we’re trying to pay as much homage to the source material as possible, and we do think there are a couple of fun ideas like that in here, most of which I don’t want to spell out for you, but absolutely. We want to take as much of the mythology that people love and present it in a way that’s totally faithful to what people love about it, but in a [different] way.”

Carroll later confirmed that Jameson and The Daily Bugle would appear in some form in Far From Home. One recent version of Jameson that received some acclaim was in the PlayStation 4 video game Marvel’s Spider-Man where the character was re-imagined as a the host of the podcast “Just The Facts with J. Jonah Jameson”. It would be cool to see The Daily Bugle revamped as a multi-media conglomerate. Or, dare I say, maybe something akin to Buzzfeed?

Who would your dream casting for J. Jonah Jameson be if J.K. Simmons is out of the picture?