Yesterday 20th Century Fox released the first trailer for Underwater. Although the new film from The Signal director William Eubank looks to be a combo of a few other movies (The Abyss and The Descent) we’ve seen before, it’s kind of intriguing nonetheless.

Originally filmed in 2017, the new horror-thriller stars Kristen Stewart, Jessica Henwick, T.J. Miller, and Vincent Cassel. And although you’d think the film had been delayed for various reasons like T.J. Miller’s fake bomb threats and sexual misconduct allegations, that wasn’t the case. It’s just finally been scheduled now that Disney has officially taken over all of the Fox properties. So fingers crossed this might actually do well when it hits theaters.

Stewart leads Underwater as Norah Price, a jaded member of an underwater research crew whose lives are endangered when their subterranean lab is destroyed by an earthquake (which they helped cause). Dwindling oxygen and damaged machinery aren’t the only things they have to worry about either, as Norah and her team are hunted by mysterious deep sea monsters unleashed by the quake. 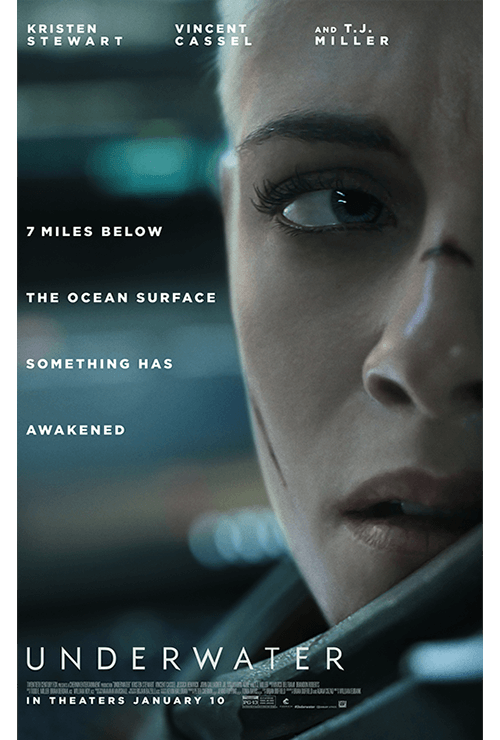 I’m not quite the Kristen Stewart fan that Vincent Kane is, but I did like The Signal and this looks pretty well done.  What do you guys think? Interested in seeing this at all?