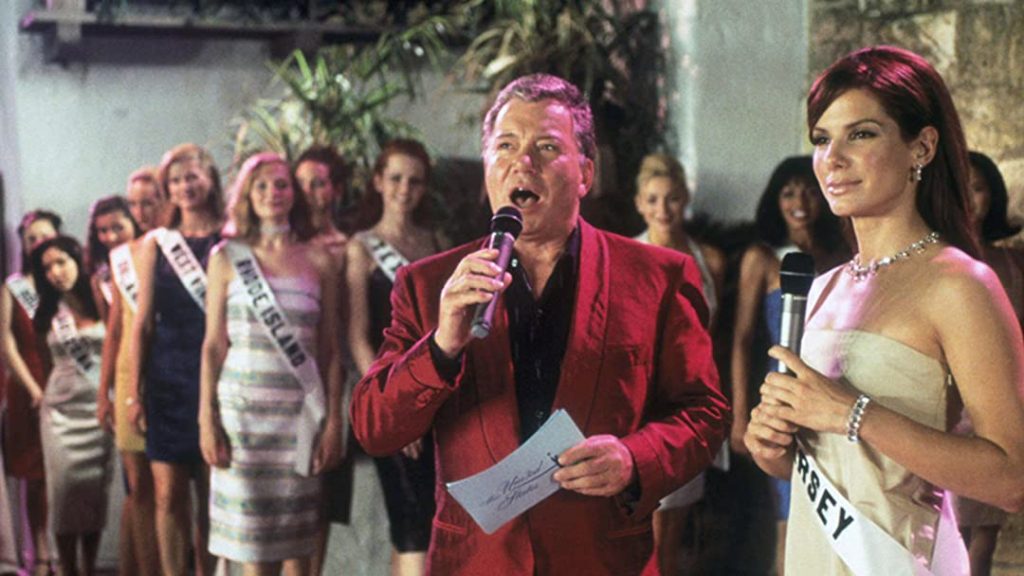 Grace Hart (Sandra Bullock) is a tough, somewhat under-appreciated FBI Agent who is demoted to desk duty when her attempt to save a choking mobster during an FBI sting gets another agent shot. When a domestic terrorist known only as “The Citizen” threatens to bomb the 75th Annual Miss United States pageant, Grace suggests to the agent in charge, Eric Matthews (Benjamin Bratt), that they place an undercover agent in the pageant. Eric agrees and volunteers Grace to be that agent. Grace is reluctant but finally agrees to enter as Miss New Jersey when the original Miss New Jersey is disqualified. Given Grace is a tomboy with no ladylike qualities, she is given a makeover by a respected beauty pageant coach, Victor Melling (Michael Caine). Grace Hart is then transformed into Gracie Lou Freebush, and as she arrives at the pageant, it’s quite clear Grace is way out of her comfort zone. But she makes friends, most notably Miss Rhode Island, Cheryl Frasier (Heather Burns) and begins to impress the judges with her “talent” of water music and self-defense skills. Everyone seems to be thrilled with Grace, except for the former pageant winner and current competition director, Kathy Morningside (Candice Bergen), who feels Grace’s presence is making a mockery of the pageant.

I’ll leave the quick synopsis there as not to “spoil” anything further. It’s been a while since I’ve watched this movie, and it was fun to rewatch it now knowing how many memes have surfaced from this movie. There is Cheryl’s iconic response to the pageant MC’s question of the perfect date: “That’s a tough one. I’d have to say April 25th. Because it’s not too hot, not too cold, all you need is a light jacket.” and of course “She’s beauty, she’s grace, she’s Miss United States!”

There are some fun moments that hold up even nineteen years later, but the plot itself is definitely a bit lackluster. The culprit’s reasoning for wanting to bomb the pageant is just ridiculous and Eric annoyed me much more this go around than he did initially. He and Grace clearly respected each other before her makeover, but his interest didn’t fully kick in until she was showing off her legs and wearing make-up. I probably would have rooted for these two much more if there had been genuine romantic interest prior to Grace becoming “beautified”.

And, like most Cinderella Complex movies, Grace doesn’t return to her life of comfort after the pageant is over. She’s still ditched the glasses, styles, and curls her hair and wears makeup with some more feminine clothing. Not that there’s anything wrong with that, but I would love to watch a rom-com where, if the main character needs a makeover for whatever reason, she also discovers she’s just fine being who she is, even if that means wearing sweatpants, and glasses and keeping her hair in a ponytail.

That being said, I did enjoy watching Grace bond with the other pageant contestants, realizing that some of her preconceived notions about pageants were wrong. Bullock has starred in several films where her character is lonely and begins to discover what it’s like to have friends and family, and she makes it so damn endearing every single time. Michael Caine is delightful as Victor, and both Bergen and William Shatner, who plays MC Stan Fields, have the occasional humorous moment, but it’s Bullock who is the glue that holds the entire movie together. She had already proven her ability as a comedic actress by the time this movie was released, and if anyone is able to take a weak script and turn it into a successful film, it’s Bullock (on a $45 million budget, Miss Congeniality made $212 million worldwide).

There’s really nothing special about Miss Congeniality, but it’s not terrible either. It’s just one of those movies that’s entertaining enough to watch when it’s on television and there’s nothing else on, or if you just need a bit of background noise while you’re doing something else.