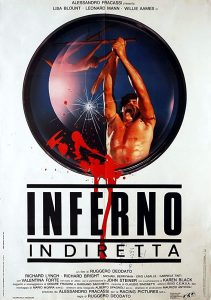 Plot: A reporter and her cameraman connect a surviving Jonestown leader and a TV exec’s missing son to a drug war where jungle installations are being massacred by an army of natives and a skilled white assassin.

Country of Origin: Italy or Florida. I have no idea.

Sex and Violence: Some titties and a shit ton of violence and gore.