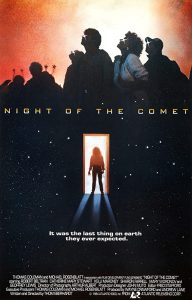 Film: Night of the Comet

Plot: A comet wipes out most of life on Earth, leaving two Valley Girls fighting against cannibal zombies and a sinister group of scientists.