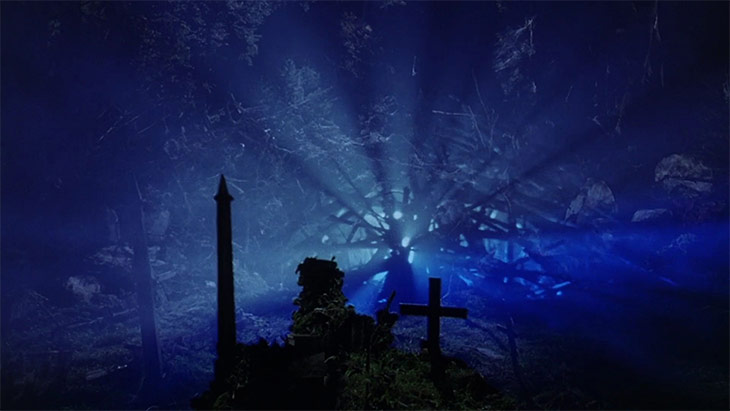 “The soil of a man’s heart is stonier, Louis. A man grows what he can. And tends it.”

So, I live in Maine, and we export exactly four things: lobsters, potatoes, blueberries, and Stephen King. (Also, gross generalizations.) Uncle Stevie has become something of a combination of mascot, bogeyman and state institution here, and reading his books was a rite of passage when I was a kid. I read each of them as soon as I was allowed (and some of them long before I should have been) and even during my fantasy/sci-fi kick in high school I made sure I read each new release.

Pet Sematary had a reputation. It was said to be the book King himself thought was too awful to publish. Rumor had it that even made his wife, author Tabitha King, sick. When it came out I remember that I read it straight through in one headache-inducing sitting. It didn’t quite live up to the rumors, but almost. 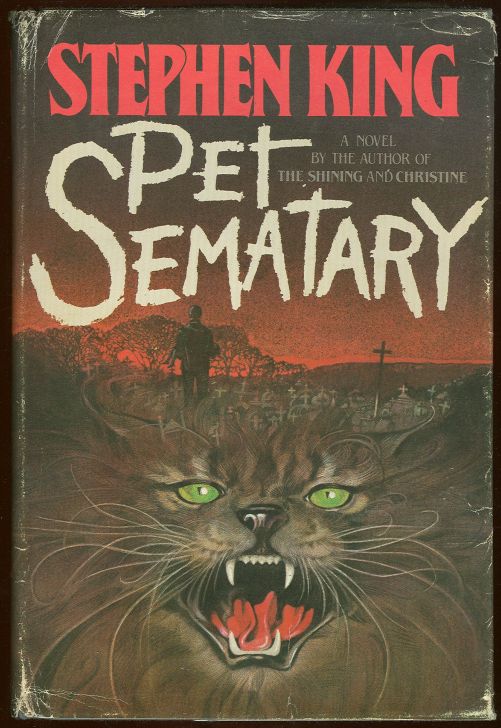 I had a project several years back where I was trying to read all of Stephen King’s books in order and write a little something about them. I think I got as far as It before taking a break. My ‘temporary hiatus’ with that has now stretched to 5+ years, so it seems unlikely that I’ll return to it – though hope springs eternal. That was the last time I re-read Pet Sematary and I was struck by how different my experience was reading it as an adult. Whereas my younger self enjoyed the book as a straight-up horror-fest, focusing on the “good stuff” – the deadfall and the long walk beyond, the return of Church, Rachel’s sister, Gage and that ending. On that level the book was more than satisfying. As an adult, it was the grief that got me. The horror of loss, real loss – and how given the opportunity to avoid cutting a piece of your heart out and burning it every day on the altar of grief, who wouldn’t at least contemplate it?

It’s been even longer since I’ve watched the Pet Sematary movie. I remember being distinctly disappointed in it. It didn’t seem as dark or as gory as I was expecting, and Fred Gwynne’s accent was a howler to me at the time. I think I felt like it was pulling its punches. 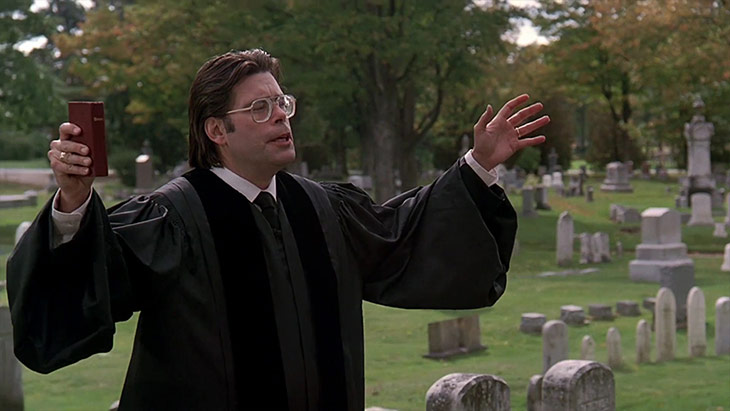 It was one of the few Stephen King movies actually shot in Maine (I know Graveyard Shift was another) and people I knew were either in it (as extras) or working on it in some capacity. I was going to college in Orono at the time and always kick myself that I wasn’t on campus for the day they shot the scenes where Pascow is brought to the infirmary. My sister in-law, Jacqui, DID manage to get into that scene, as did a few other people I knew.

I spent a day hanging around Mount Hope Cemetery in Bangor, where they shot the scenes of the two funerals and where Louis digs up Gage. I think I had a hope of being hired as a PA or something, but I got no closer than bringing someone coffee. (If you’re ever in Bangor, Mount Hope is definitely worth the trip – it’s one of the most beautiful cemeteries I’ve ever been in.)

The Medium
I have the Paramount Blu-ray from 2012, the one with the lenticular cover of Church hissing it up on the cover. There’s no real need for a Blu-ray of this film, as the cinematography is  mostly just serviceable, but it’s nice to have and did – after several rewinds – allow us to pick out my sister-in-law amongst the crowd as Pascow is brought into the infirmary. 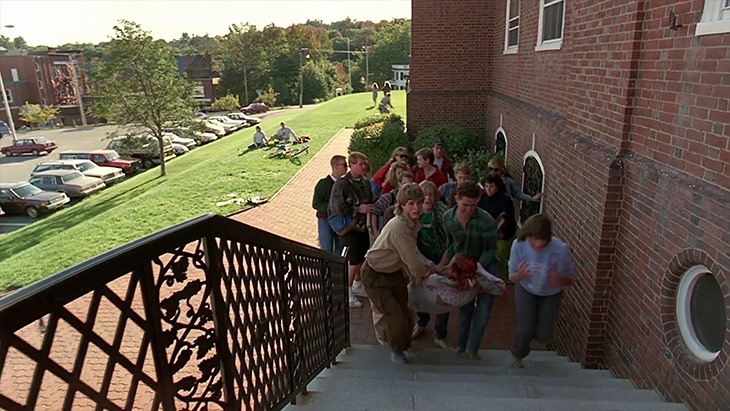 There was a ’30th Anniversary’ release earlier this year which apparently has a much better transfer and a bunch of new extras.

The Movie
The Creeds, Louis, Rachel and their two young children, Ellie and Gage, move to a small town in Maine so that Louis can take a new job as a doctor at the University of Maine. Oh, and there’s also Ellie’s cat, Church – short for Winston Churchill. There’s a lot to like about their new house. There’s the kindly older neighbor, Judd Crandal, there’s the large yard, and there’s that path up into the woods. The one that goes to the Pet Sematary where the local kids bury their dead pets. 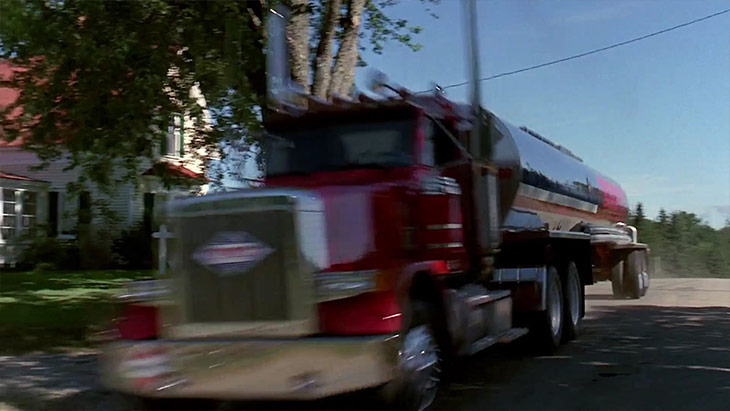 There’s very little in the way of subtlety in Mary Lambert’s adaptation. The trucks are in almost any transition that brings us back to the Creed residence. Judd saves Gage from one in the opening scene and he lays it on pretty thick (though not as thick as is accent) about how dangerous the road is. It’s a horror movie – we know what’s coming.

And come it does. Church doesn’t make it across the road one day. With Louis’ wife and kids in Chicago visiting family Judd seems to think this is the perfect time to show Louis the ancient Indian burial ground past the deadfall behind the Pet Sematary. Ostensibly this is because Ellie is young and maybe not yet ready to face death – certainly Rachel doesn’t want it even discussed around the house. Really, though, it seems like once you’ve been to the old burial ground (I liked Judd’s story about his dog Spot) you’ve got a burden that you need to pass on. It’s the price, I think, for bringing back the dead – you have to pass the secret on to some other poor bastard. 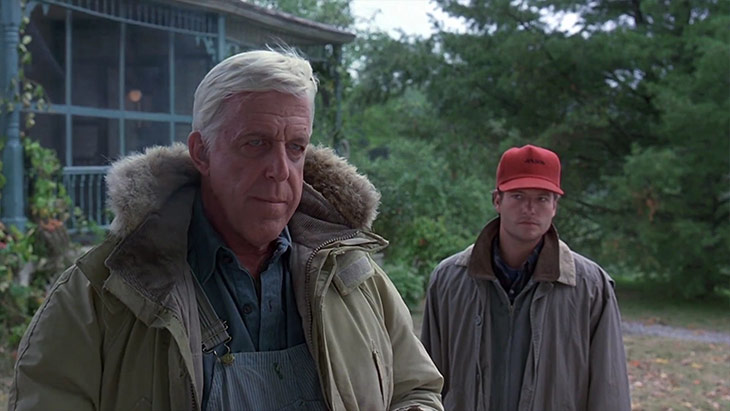 For that’s what the old burial ground does. It brings back the dead. At least, their body is brought back – whatever comes along for the ride doesn’t seem to be the same. Church isn’t, for sure. He’s violent and secretive and smells like the grave.

You know what’s going to happen. You KNOW it. And pretty much everything that happens after that horrible moment when Gage chases the kite away from Louis’ reach sees the film working at its best. We get horrible glimpses before – the story of Rachel’s sister, for instance – but once the funeral is over and Judd sits down to tell Louis why he mustn’t do what he’s thinking of doing – that’s when the horror really starts revving up, like those trucks on the road.

And Miko Hughes, man. I can’t imagine that they could have gotten any child actor better for that role. He’s cute as hell. And disturbing in equal measure. 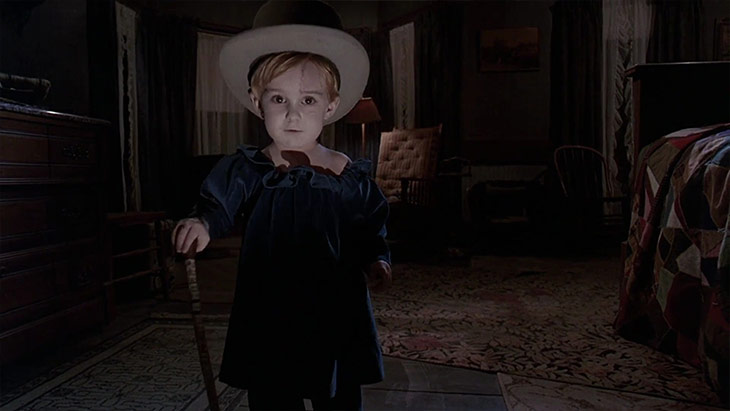 Time seems to have softened my attitude toward the movie, somewhat. I find Gwynne’s accent endearing now, rather than laughable. I like the story of what happened when Timmy Baterman came out (and like the nod to Bride of Frankenstein as he mutters “love dead, hate living” while attempting to kill his father). I like Pascow, but always did – he seems like a Tales From the Crypt host come to life (well, a kind of life anyway). I like all of the stuff with Gage after he comes back. That line “we had an awful good time, daddy” sent chills down my spine, which is probably the first time that’s happened watching the movie.

The Bottom Line
I find that I appreciate Pet Sematary quite a bit more as its aged. It’s still not great – and Dale Midkiff probably needs to be buried in the Indian burial ground so he’ll come back with a little more life in his performance – but it’s enjoyable and has some truly good moments. I’ve heard mixed things about the remake, but I would dearly love to see a film that was unafraid to get as dark as the source material.