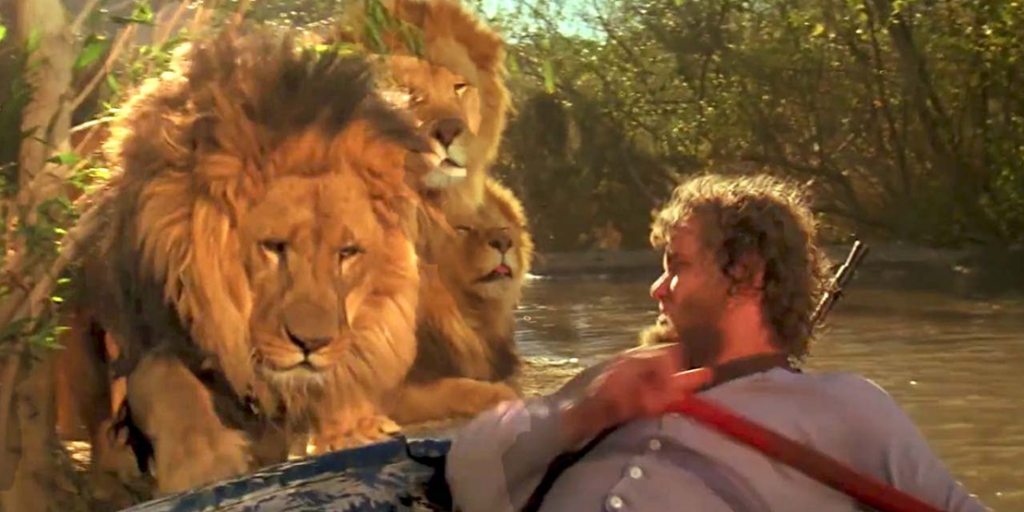 I don’t know what’s crazier. The fact that William Peter Blatty financed his novel The Exorcist by winning 10,000 dollars on a game show hosted by Groucho Marx. Or that one of the executive producers of that film was able to make his dream project because of its massive success. In and of itself that isn’t so crazy, that is Hollywood’s modus operandi after all. But the executive producer in question was Noel Marshall. And that dream of his took eleven years and violently harmed over seventy people.

Clearly that bit of free association was a poorly constructed segue to set up the madness that is the film Roar. But it’s still weird to think that the director of Speed would have never gotten his scalp ripped over his head if it wasn’t for Groucho Marx and a ridiculous wooden duck.

Roar was conceived by Noel Marshall and Tippi Hedren. The two had just completed the film Tiger by the Tail together in Africa in 1969. That was when they witnessed a plantation house completely overrun by lions. The husband and wife team simultaneously came to the decision that that had to be a movie.

They —both being animal rights activists— envisioned the film as a response to the dwindling population of endangered cats on the African continent. Which brings to mind the proverb “the path to hell is paved in good intentions”. In this case it should be changed to “the road to the morgue is paved in shocking incompetence and absolute insanity.”

From inception to completion, the film would take eleven years to make. Cost seventeen million dollars (most of which went to hospital bills and the maintenance of over 120 lions and tigers). And depending on who you asked, injured between 70 and 100 cast and crew members.

You would think a production that was fraught with so many injuries, including but not limited to  —Jan de Bont (cinematographer and aforementioned director of Speed and Twister) needing 200 stitches to reattach his scalp, Hedren receiving a fractured leg and major bites to her scalp and neck, Melanie Griffith having her face mauled so badly she almost lost an eye, and Marshall getting attacked so many times that he eventually developed gangrene— would be shut down almost immediately. However, Marshall was so determined to spread his message of the peaceful tranquility of lions, he wouldn’t stop the production for anything.

Marshall even went so far as to give the lions not only acting credits, but a co-directing credit as well. If they made an Ed Wood/The Disaster Artist-esque biopic about the making of this film, nobody would believe it. It’s madness. The only thing crazier than the behind the scenes stories is the film itself.

The film starts with Marshall (as himself, kinda) preparing for his family to arrive. they are moving from Chicago to Africa to come live with him. But before the family reunion he needs to deal with poachers. An African committee opposed to his care of wildlife (who are coming to review his grant), and a power hungry alpha lion named Togar. One who is picking fights with everything as a sign of dominance. This sounds like an entire plots worth of story but this all happens within the first ten minutes.

Due to a series of events you don’t care about and I don’t feel like recapping, Marshall doesn’t pick his family up at the airport. This results in them going to his house without him there. Which doesn’t mean it’s unoccupied, however. Because as you know, there’s lions. Lions are fucking everywhere.

The first part of the film is far more child friendly. There’s multiple scenes of the giant cats doing cat things. With the exception of Marshall’s bloodied, bandaged hand (which is actually real and had to become a plot point), the film is innocuous. The second part however, is not. For at least forty minutes of the film, it becomes a horror movie. A horror movie involving a family being terrorized by hundreds of cats.

It’s ironic that Tippi Hedren wanted this film to be a statement for activism and a pro African cat movie, yet structures the majority of it around her film The Birds.

I’m all for animal conservation. But when I’m watching your daughter get her hair violently pulled by a tiger. Or your sons getting attacked by lions and other various cats. It makes me want to go out and buy a dog.