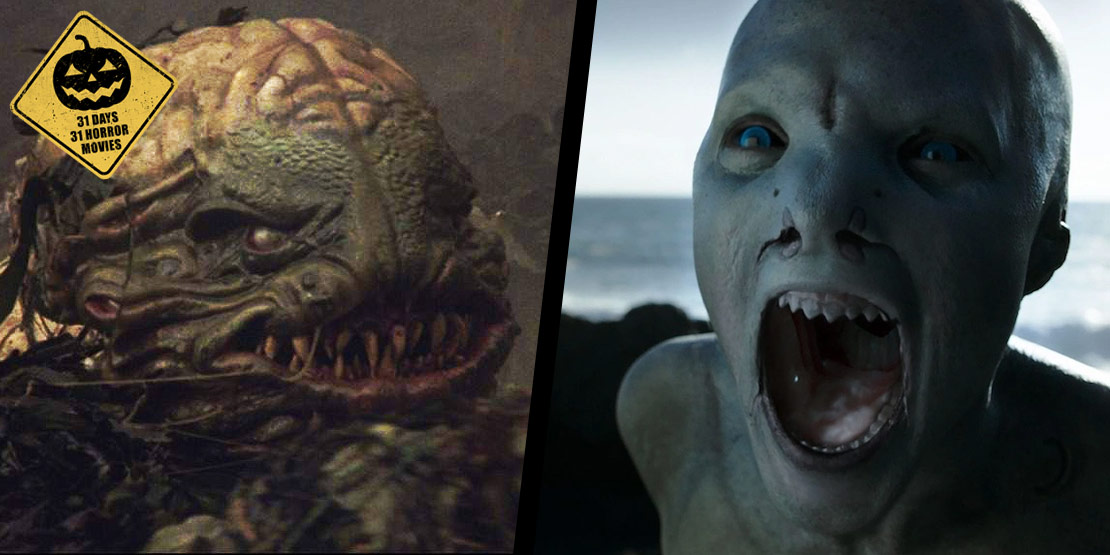 Warning: Films include sexual assault both by and to humanoid sea creatures.

I’ve had a love for humanoid sea monsters since I was a kid and first saw Creature From the Black Lagoon. Not that they got great representation in film after that, with films like Creature From the Haunted Sea, Spawn of Slithis and Screamers providing dubious thrills featuring rubbery wet monsters of varying quality. It’s gotten a better treatment lately, with Guillermo Del Toro’s  The Shape of Water providing a huge step up from its predecessors in quality of story, filmmaking and effects. That’s a love story, though, not a horror story. 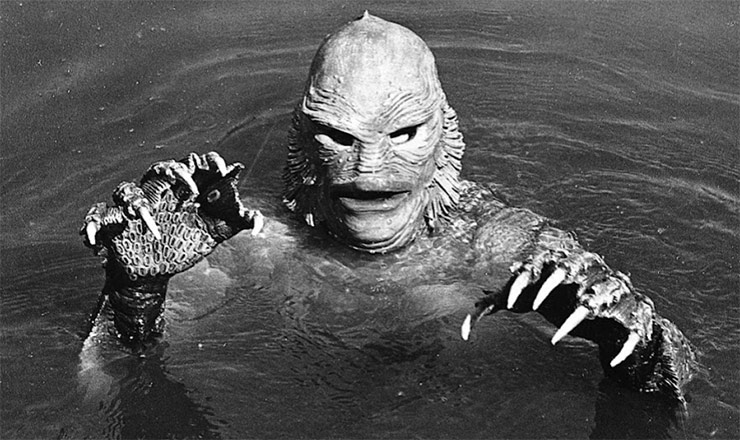 By the time I finally saw Humanoids From the Deep I’d already read The Shadow Over Innsmouth and – miscegenation overtones aside – it had really affected what I hoped to see from an underwater hominid story. I kinda hoped – and keep hoping – for a version of The Wicker Man with fish people. The Stuart Gordon film Dagon comes close, but doesn’t quite stick the landing for me.

So I keep waiting for that sort of film to arrive, but in the meantime I wade into the metaphorical waters of films like The  Monster of Piedras Blancas, The She Creature and Blood Tide. And films like the ones I watched for this double feature.

The Mediums
Humanoids From the Deep is available on Amazon Prime. Cold Skin is a Shudder exclusive. 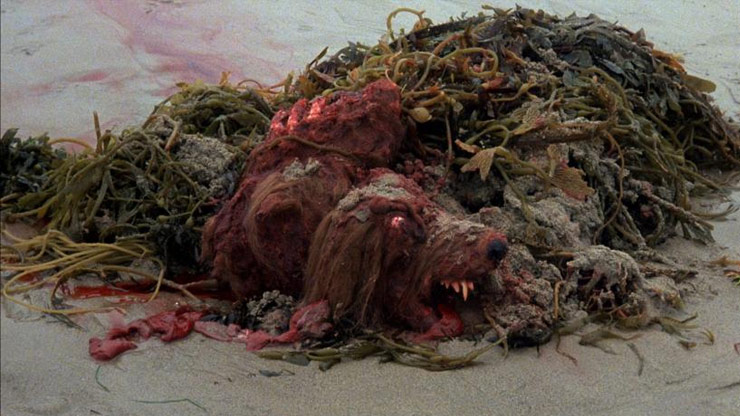 I’ve since grown more interested in the other sub-genre the film really belongs to – the eco-horror creature movie, in which man’s mistreatment of nature leads to it to rebel against him with deadly consequences. Films like Prophecy, Piranha, and Day of the Animals. As a representative of that niche it performs pretty admirably.

The seaside town of Noyo is angling to win a contract to build a new fish canning facility, despite the declining catch. There’s also increasing tension between the town and the local Native American tribe. Oh, and there’s these murderous mutant fish men that are killing men and raping women. So, you know, problems. 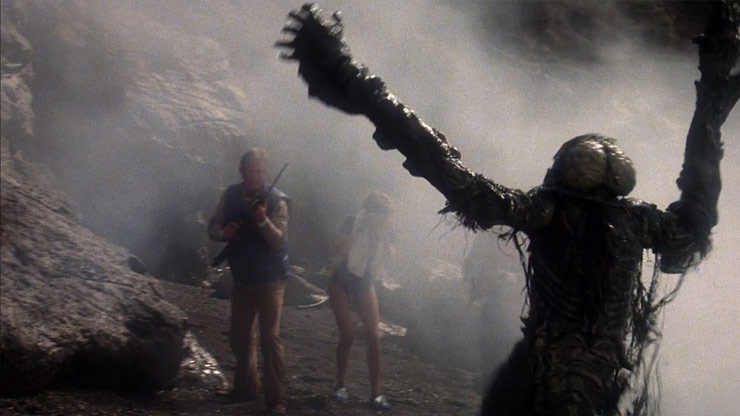 Humanoids does the smart thing by not showing the monsters too much early on. They’re a pretty good design, by Rob Bottin who would go on to do the effects for John Carpenter’s The Thing a year or two later, so when they DO show up they’re totally worth it. Yeah, the big brains are a little goofy, but you gotta take your humor where you can in this film.

Humanoids was directed by Barbara Peeters (who would go on to work on The Powers of Matthew Star and Remington Steele) and her initial cut went heavy on the gore, but light on the rape – which Corman wasn’t having. He hired a second director to film the extra nudity and rape sequences. Even as a teen these were cringeworthy. Nudity and suggestion would have gone a long way. Of course we’re talking about a film in which a crazy fish-man baby tears itself out of a woman’s stomach, so class is not what they were going for. 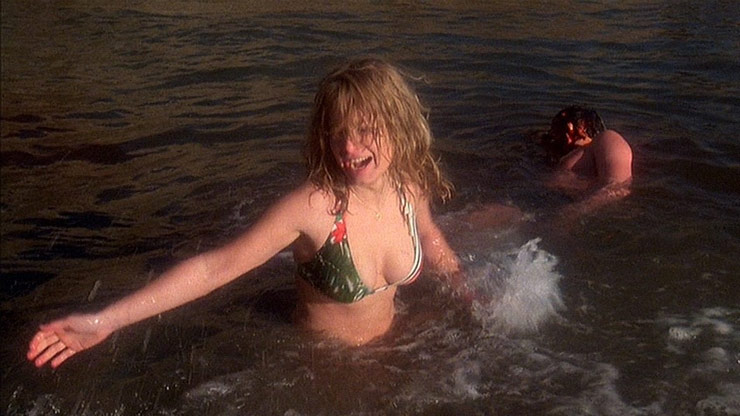 In standard eco-horror fashion the worst elements of the town tries to cover up the fishman attacks (for the good of the community – and their pocket books) and try to drive out the Native Americans for good measure. There’s some minor attempts at humanizing the bad guys, but really – this isn’t that deep of a film. It’s up to square jawed people like Jim Hill (Doug McClure, who you may have seen in such films as The Land that Time Forgot and Cannonball Run II) and Johnny Eagle to face the menace head on.

We’ve also got the ‘lady scientist’ in Dr. Susan Drake (Ann Turkel) who represents the company. It turns out their meddling with the genetic code of salmon has caused this issue (which might be one of the first examples of the genetically modified monster in film). Science won’t help anyone here, though, and the monsters will only be stopped – during a kinda fabulous attack on a local festival – by flames and gunfire (and the occasional mob attack with clubs). 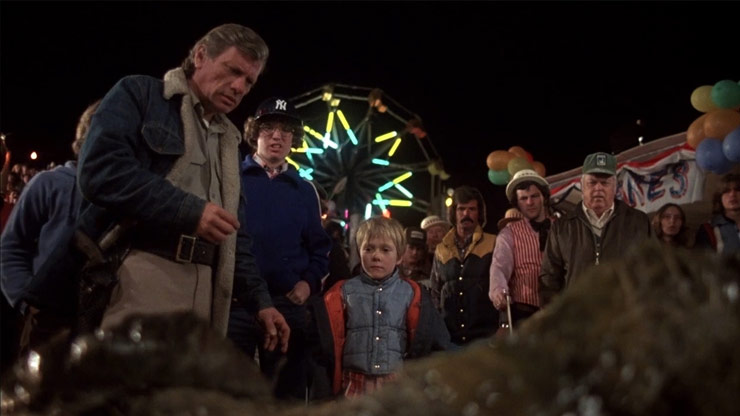 Even when the day is won, though, we’ve got to deal with the result of all those assaults – leading to the inevitable, gory finale in the delivery room.

The Bottom Line
Humanoids From the Deep has some cheesy fun to be plumbed from its shallow depths – especially if you can get past guys in lumpy seaweed suits laying on top of naked women. It’s no Piranha, but it’s no Creature From the Haunted Sea either.

Cold Skin
As a film, Cold Skin succeeds at being better than Humanoids in almost all the ways that matter. Cinematography, acting, effects – all are top notch. It’s not very much fun, though.

Based on a novel by Albert Sánchez Piñol, Cold Skin follows the travails of a young man named Friend (yes, really), assigned as a meteorological surveyor on a remote, unnamed island. Though the previous surveyor has disappeared and the only other person on the island is a brutish lout of a lighthouse keeper named Gruner (an unrecognizable Ray Stevenson), Friend (Rowan David Oakes) decides to stay. He’ll come to regret that decision. 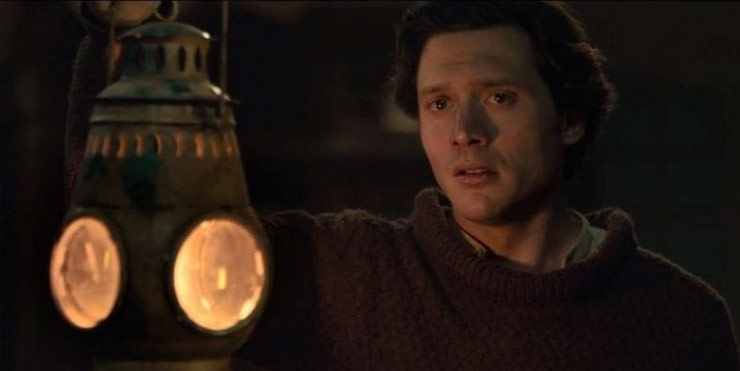 Because the island is under almost nightly assault by a menace from the sea, a horde of slimy fish men that seem intent on murdering anyone on the island. After the first attack Friend tries to get Gruner to let him in the lighthouse, but the man refuses. After setting accidentally setting fire to his small building while repelling yet another attack Friend gets his rifle and sets about forcing the issue.

Which is when he discovers that Gruner has enslaved a female of the species. This discover and an offer to provide Gruner with supplies and ammo allows him entry to the fortified lighthouse. 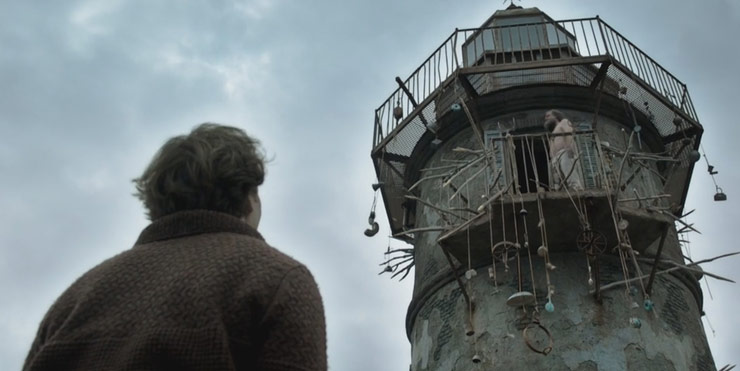 Much of the film revolves around the relationship between Gruner, Friend and the female creature that Friend ends up calling Aneris. In between assaults on the lighthouse by swarms of the creatures Friend grows more, uh, friendly with the creature – while Gruner physically and sexually assaults her. While Friend harbors suspcions that that the creatures may be more than simply mindless monsters, Gruner is intent on wiping them out.

The film, by director Xavier Gens (Frontier(s) and Hitman), sets an almost elegiac mood from first few scenes of Friend arriving on the island. The music, the cinematography, the acting – everything seems to come through a filter as shades of gray. This is a tragedy, the director seems to be saying, treat it as such. 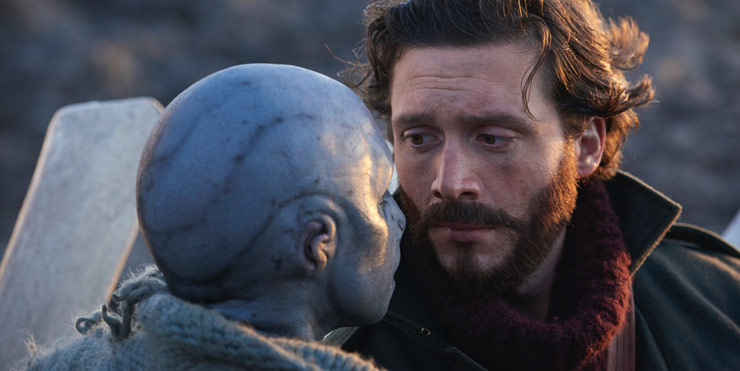 The special effects and makeup work are excellent, especially for what almost seems like an art house creature feature. The swarms of sea creatures, lit fitfully be the moving beam of the lighthouse, are appropriately terrifying and they hold up in close proximity as well. The suite/makeup used for Aneris allows for quite a bit of expression and Aura Garrido Sanchez manages a wide range of emotions without ever being able to say a word.

The movie sags somewhat in the middle, as the struggle to represent humanity is fought back and forth between Friend and Gruner a few too many times for me. A good 10-15 minutes could be trimmed from the middle and the film would be significantly tighter and more effective. It was also make the ending, as frenetic and confusing as it gets, a bit more impactful and less abrupt. 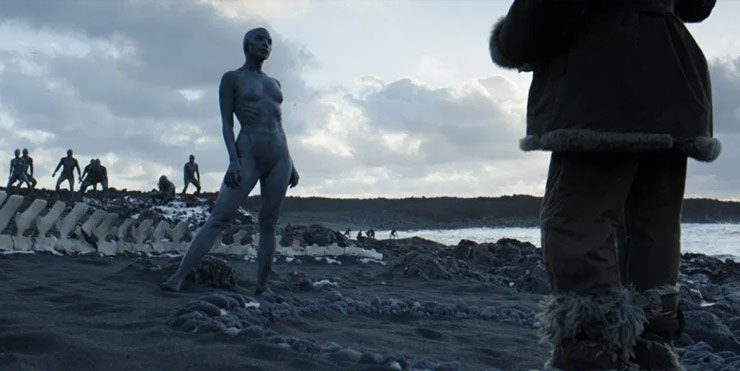 The Bottom Line
One of the better humanoid sea creature movies, Cold Skin is a bit too cold and gray to become invested in. While the characters have moments, their conflict isn’t as deep as the director seems to think it is, and the cycle of human/creature violence becomes repetitive.  I enjoyed it a lot, but I find myself feeling that it’s a film I won’t need to see again.