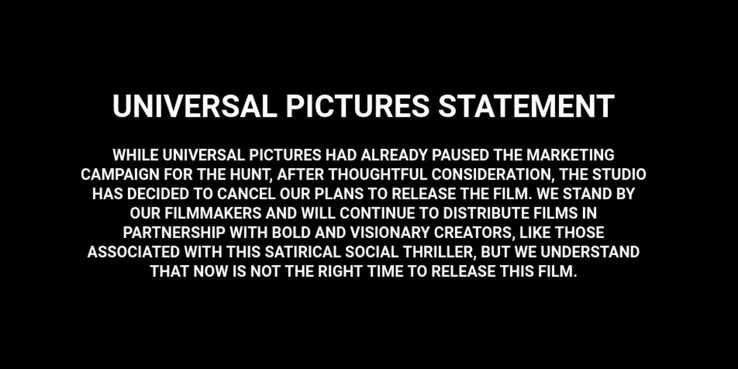 In light of recent real life mass shootings, Universal Pictures decided to cancel the release of their upcoming film, The Hunt, about 12 strangers, referred to as “deplorables”,  who have been captured for the purposes to be hunted by a group of rich elite people. The film was supposed to be satirical social thriller with a premise we have seen numerous times before of the rich and privileged hunting the poor or a certain group. This isn’t the first time that a movie or TV show has been pushed back, altered or pulled due to real life events happening around it’s release and unfortunately, it probably won’t be the last. Most notably, several films had this happen after the 9/11 terrorists attacks.

So the question I ask today is: Should Movies or TV Shows Be Cancelled/Altered After Real Life Tragedy?

Let’s just cut the crap. We all know the reason the studios make these decisions is based on money. It is not for their compassion or out of respect for the individuals and victims involved. If that was the real reason behind their decision making then half the stories and ideas for movies would never see the light of day. We know they are looking at the fact that people may not go and see their movie when these events are fresh on peoples minds.  Admittedly, I wasn’t excited to see The Hunt and I don’t I would have watched in the theater, but it is a premise that usually can be fun and entertaining, so I probably would have caught this some time down the road. This makes me not want to even waste my time on it. That may change and has nothing to do with the real life events taking place, but more to do with the faux sympathy and the sudden “awareness” being offered.

Ultimately, I don’t agree with the cancellations or alterations to an already filmed product. I can understand changing a released date to an certain extent as that happens all the time for numerous other reasons. I would like to know where you guys land on this issue. Does it even matter to you? Do you agree with the decisions made to alter or cancel movies an TV shows because of real life events? Do you agree with it being only about the studios bottom line and not their sudden awareness?

So what about you, folks? Should Movies or TV Shows Be Cancelled/Altered After Real Life Tragedy?