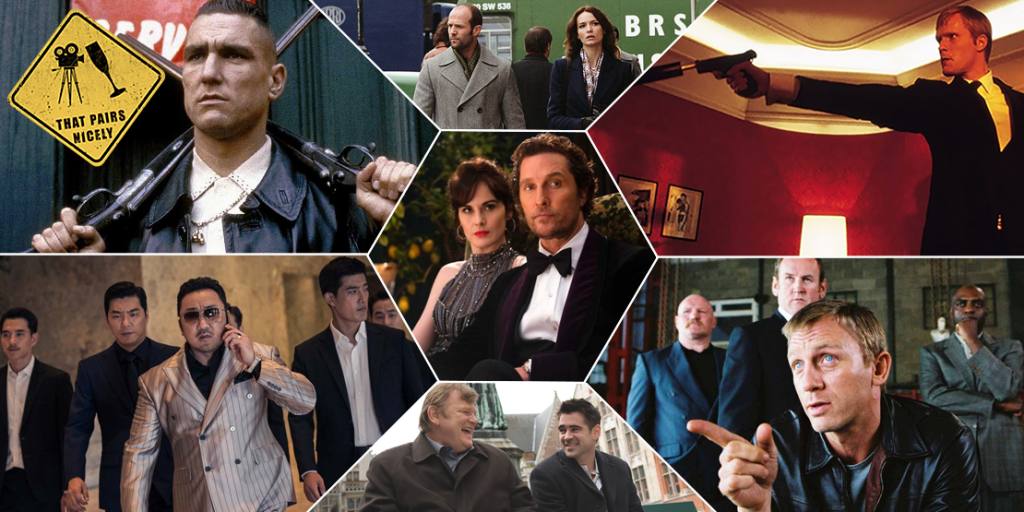 Most of the time we’re left with wanting more. We want something similar, yet new at the same time. You don’t want to watch the same film again, you want to watch something that pairs nicely.

Here at ScreenAge Wasteland, we’ve selected six films that you should watch after The Gentlemen.

When I first saw the trailer for The Gentlemen, it appeared to be Ritchie’s return to the type of film I think he does best: British crime capers. There’s no better example than his first feature length effort, Lock, Stock and Two Smoking Barrels.

Set in working class London, it’s a heist film about an overconfident young card shark and his friends who, after losing a ton of money in a rigged poker game, decide to rob a low-rent gang in order to pay off the debt. It’s a fun, fast-paced film full of snappy dialogue, memorable characters, sudden bursts of violence, and intersecting plot lines. The opening sequence alone is busting with wit and frenetic energy, and the movie only gets better from there. On top of all that, Lock, Stock, and Two Smoking Barrels has a killer soundtrack. In a period (the 1990’s) when everybody was trying to be the next Tarantino, Ritchie put his own spin on the crime genre. What he gave us is a movie with a unique perspective that is visually reminiscent of British film from the late sixties. If you like The Gentlemen, you’re going to love Lock, Stock, and Two Smoking Barrels.

Before Daniel Craig was 007, he was XXXX. Matthew Vaughn’s directorial debut features Craig’s protagonist attempting to get out of the cocaine industry. However, he has to finish two tasks before that will be allowed. If you watched the trailer above (which is amazing), you’ll see that things don’t go exactly to plan. There’s a lot of broken deals, unintended consequences, and plenty of action and gruesome violence to go around. We’ve come to expect that from Vaughn, but in 2004 audiences had no clue what they were in for.

The plot may be a bit hard to follow at times, but Craig’s performance keeps you enthralled. I wouldn’t be surprised if the folks over at Eon say Layer Cake and said, “That’s our next Bond.” So if you’re sad that 2020 marks the final outing of Craig’s 007, just watch Layer Cake and treat it as an unofficial Casino Royale prequel.

It’s no secret that when venturing to the cinema for a Guy Ritchie picture you’re opting for style over substance. And that’s fine. There’s always a place for electric escapism. But let’s be real, there are as many whiffs as there are home runs.

Martin McDonagh’s impeccably sharp comedic crime thriller packs more dangerous fun than most of its counterparts. Known for timely brushes with absurdism and a keen sense for timing, McDonagh crafted a delicious script that would be strong enough to stand on its own. The layered crime element and action sequences are a fine-tuned bonus to boot. Basically what I’m saying is this:

Guy Ritchie dropping us into his world of exaggerated European aesthetic is reliably delightful while McDonagh’s In Bruges takes the whole concept to hall of fame level mastery. Anytime Colin Farrel, Brendan Gleeson, and Ralph Fiennes are on screen we’re in for a savage treat. Because when a Hitman grows a conscience you know shit is about to get crazy. At the same time the film never sacrifices substance along the way. And in that light, I can’t think of a better pairing for The Gentlemen.

The Gangster, The Cop, The Devil | Sailor Monsoon

Nobody does crime thrillers as well or as brutal as South Korea. That country has a strong affinity for that genre for some reason. I’m not complaining mind you, I just find it interesting that that’s the genre they’ve chosen to go all in on. Especially considering gangsters are usually associated with the British or America but time and time again they’ve proven they have as legitimate a claim to the subgenre as anyone else.

The film, about a crime boss (Train to Busan‘s Dong-seok Ma) who forms an unlikely partnership with a local detective (Mu-Yeol Kim) in order to catch an elusive serial killer who violently attacked him, feels more like a greatest hits album than its own thing but even a weaker entry within the genre is still leagues better than anything anyone else is producing. If you’re familiar with South Korean cinema, if you know the tropes and the plot beats and you’ve seen some violent action set pieces from some of the bigger films, this film might not do anything for you but if you haven’t, this is a great starting place. It’s brutal, it’s loaded with action and it has Dong-seok Ma in it, who’s just the best.

Full disclosure – I chose this film before seeing the trailer for Guy Ritchie’s The Gentlemen. That trailer promises a return to Ritchie’s more high-octane combination of criminal characters, twisty plots, violence and comedy – ALA Lock, Stock and Two Smoking Barrels – and Roger Donaldson’s The Bank Job is not anywhere near as visceral, exciting or, and let’s just be honest, as good as all that. Would I have chosen another film – something like Sexy Beast maybe – instead of this? Maybe.

But then, you can’t have a good steak for every meal, can you? Sometimes a decent order of fish n’ chips is what you want, maybe even what you need, after a fancy four-course with all the trimmings. And you could do worse than The Bank Job, which has a lot of fun with a ‘based on a true story’ bank heist plot, some vaguely sketched out but still funny characters played by actors that are familiar but not top tier, and one of the first decent acting performances by Jason Statham (a man who’s first acting job was in Ritchie’s aforementioned Lock, Stock etc.). I mean I don’t think he even head-butts anyone until the third act!

So this is all fairly tongue in cheek, but so’s the movie – with some nonsense about Princess Margaret’s racy pictures, a bit of half-assed spy stuff and a male lead who’s about a foot and a half shorter than his romantic interest (Saffron Burrows). It’s pretty fun, though, with enough action, characters and comedy (and a little nudity) to hold your interest for the entire running time. Maybe it’s not the fine wine you’d want after a great meal, but it’s a decent enough snack to tide you over.

The second film on this list with a lead character with no name. This gritty, British crime drama from 2000 stars Vision himself Paul Bettany in a role like you’d never expect. Starring as the unnamed violent and sadistic gangster in a blood-soaked 1960s London that tells the story of his rise to power in the British underground.  The bulk of the film is told in flashbacks, prominently featuring the relatively unknown Bettany. However, it is the book ends with Malcolm McDowell as the aged Gangster that tells the whole Machiavellian tale. It may not be your fun and flashy gangster film a la Guy Ritchie, it is more so a dark and visceral one that is somewhat Tarantino-esque. Featuring an excellent cast including David Thewlis, Saffron Burrows (again), an almost blink and you’ll miss him Andrew Lincoln, and Layer Cake alum Jamie Foreman. The latter who is the son of real-life gangster Freddie Foreman, known for the murder of Frank “Mad Axeman” Mitchell who ran with the Kray Twins.

Those are our pairings; now it’s your turn. What do you think would pair nicely with The Gentlemen?