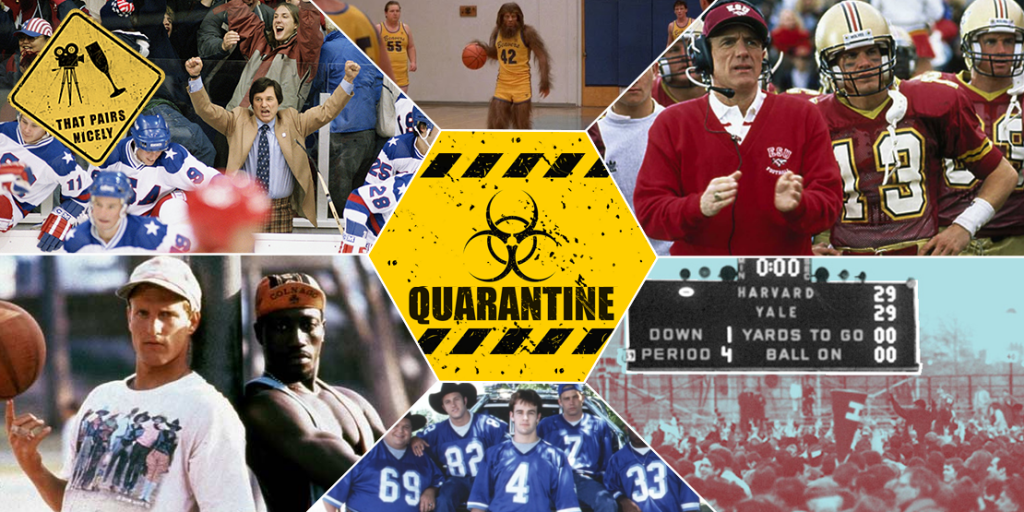 Here at ScreenAge Wasteland, we’ve selected six films that you should watch during quarantine if you’re sad all the actual sports have been cancelled.

I’m a sports nut and football is easily my favorite sport. More specifically college football. I love the atmosphere, the pride, the stakes, and just about everything that goes into college football. That’s why I love 1993’s The Program. It revolves around a once prestigious program and coach that have fallen on losing times. All they are trying to do is get back to a bowl game which is only six wins out of eleven games. Not for a championship or to win a tournament or go from worst to first. Just win six games to get a bowl game and people will be happy. Well, for a bit at least. It shows several off the field issues that face coaches and players on a daily basis. To me, The Program would make for a great hard-hitting Netflix series where they could dig into more issues and other subject matters that these programs face. The football action is well done and intense. Some of the best trash-talking of any sports movie take place here. James Caan plays the embattled coach on the verge of losing his job. The Program has been a yearly watch for me before the football season since it came out.

Fellow film fanatics, for your consideration for best duo ever cast in a sports movie I present Wesley Snipes and Woody Harrelson (get ready for some swearing in the linked video).

To say it’s an all-time greatest sports movie may be a bit of a stretch; best case scenario it clocks-in at the number three spot for basketball flicks (shout out to Hoop Dreams and He Got Game).  But there’s something fantastic about the unfiltered chemistry between Wesley and Woody over the backdrop of authentic playground ball that gives this classic 90s installment an extra layer of flair. The hoop sequences are sharp as ever and the trash-talk takes it to the next level. White Men Can’t Jump is as much a salute to a niche urban locale as it is a comedic buddy movie about basketball.

We all love the feel good journey of Disney-does-sports-ball-pictures because who doesn’t want Denzel bringing the Titans together or Kurt Russel toppling the Soviets in their lives? But when the warm-and-fuzzy just won’t cut it, White Men Can’t Jump is always there waiting … and ready to give a raucous earful to its inspirational counterparts. There’s room for both on the collective palate of athletic cinema. And damn if it’s not one of the most re-watchable of its kind.

In 1985, Family Ties, Back to the Future, and Teen Wolf cemented Michael J. Fox as an ’80s heartthrob and superstar. However, out of the three, Teen Wolf is definitely the middle child in terms of legacy. That’s a shame because the film is chock full of great moments and one hell of a cast (Stiles is awesome). The party that everyone goes too involving crazy drinking games (teenagers of the ’80s, did you ever do the eating jelly out of a woman’s shirt game? I need to know!) and the early games with Fox as the Teen Wolf are some of my favorite moments (as is “Surfin’ U.S.A.” on the van). Okay, I’m now remembering that this film did inspire the MTV television series of the same name, but let’s be honest, that show will probably end up being remembered in fifty years over this.

Haven’t sold you yet? Well, if you can find a DVD copy of Teen Wolf, right at the end when the camera pans through the applauding crowd there’s an extra with his fly undone which he quickly zips up. Why is his fly undone? It’s one of cinema’s greatest mysteries. Is it a good enough reason alone to watch Teen Wolf? Probably not, but if you weren’t already sold with Michael J. Fox as a teen werewolf playing basketball then nothing I say will change your mind.

“In West Canaan, Texas, there’s another society that has its own laws.” In small town Texas, football reigns and the players are king. Their self worth is judged on how far they can throw a football, or how fast they can sack the quarterback. If they’re good, they can get away with anything, including stealing a cop car with a bunch of naked ladies. When the handsome and popular quarterback goes down with an injury, Coach Kilmer, played by an intimidating, crazy-eyed Jon Voight, names back up Jonathan “Mox” Moxon the starter. Mox has more ambitious plans than to allow football to rule his life and the film thrives off of Mox and Kilmer’s antagonistic relationship, which in turn begins to shift the status quo of West Canaan. Back in 1999, Varsity Blues wasn’t projected to make a splash. It wasn’t even expected to make a ripple. But it was a high school drama with an attractive cast that appealed to the MTV generation (back when MTV was still showing music videos) and it ended up becoming a rather modest hit. Yes, Varsity Blues is predictable, a little silly, and full of questionable Southern twang, but it’s also earnest, funny, and engaging. Embrace the cliches, the alt-rock heavy soundtrack, and the delivery of the cringe worthy line, “I don’t want your life!” and prepare to have a lot of fun.

Every single time this movie is on I watch it. It’s just so damn good. How can you not love Kurt Russel as coach Herb Brooks (or just in general really)? It’s the first time I had seen a film by Gavin O’Conner and after that I pretty much want to watch all his films. Warrior is the one I almost picked but then this was on ESPN the other night and I changed my mind. It’s just an all ’round great flick and shows how Coach Brooks put together, hands down the greatest “dream team” of young hockey players. They went in as underdogs, but their love for the game and dedication allowed them to beat the Soviet Union and take the gold in the 1980 Winter Olympics. The game plays out as Al Michaels, who recreates his running commentary until the tail end when they segway into his original audio as they win the game because there was no way he could ever reproduce the excitement in his voice the way he did in 1980. Do yourself a favor and watch this one if you haven’t seen it.

A film so good, so white knuckle exciting, that it tells you the outcome of the game in the title and you’ll still be on your seat for the last half hour. Examining the historic 1968 football game played between two undefeated teams from Harvard and Yale, Harvard Beats Yale 29-29, is a “remember when” doc that’s equal parts human interest story, time capsule and crowd pleasing thrill ride. It nimbly drives from end zone to end zone, delivering touchdown after touchdown. Informative and exhilarating, this film is one of the most energetic documentaries I’ve ever seen.

That is until Tommy Lee Jones shows up. Every time they cut to an interview with him, the film immediately loses momentum. I’ve seen hostages read ransom notes with more enthusiasm and they have guns pointed at their heads. The most famous person on the doc is by far the weakest element. Outside of his garbage interview, the film is perfect. But don’t take my word for it, David O. Russell claims that this is one of his favorite films. So you have to love it. Or he’ll throw shit at you — just ask Lily Tomlin.

What sports films have you recently watched?