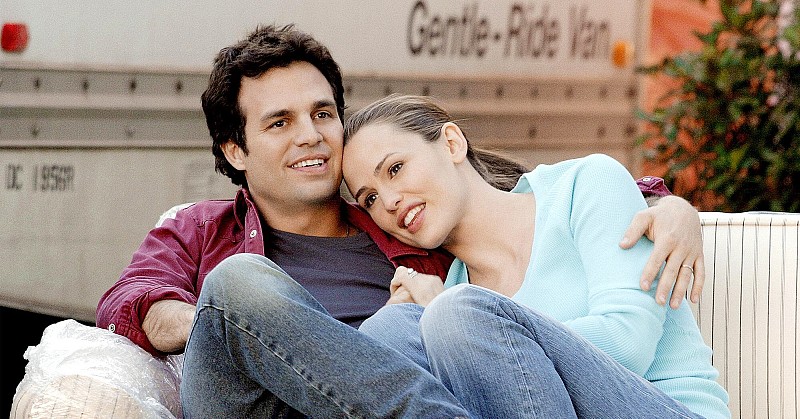 Thirteen-year-old Jenna Rink has had it with adolescence. Despite having a loyal, but nerdy best friend named Matt, Jenna is desperate to be friends with “The Six Chicks”, a group of popular girls at school. She invites them to her birthday party but instead of being accepted, she suffers a Seven Minutes in Heaven humiliation and fervently wishes she was a grown-up. Thanks to some magic dust that she got from Matt, her wish is granted and a 30-year-old Jenna (Jennifer Garner) wakes up in New York City. After the shock of what has happened begins to wear off, she discovers she’s a successful magazine editor for the kind of beauty magazines she would read as a teenager, and her best friend and colleague is Lucy Wyman (Judy Greer), one of The Six Chicks. But her success didn’t come easy, as Jenna soon finds out. She and Matt (Mark Ruffalo) are no longer friends and haven’t been for quite some time. It also becomes clear to Jenna that her adult-self is conniving and self-serving, obsessed with having it all and not caring who she hurts along the way to achieve her dreams.

13 Going on 30 is definitely a romance, but it’s also about Jenna’s redemption as a person. She realizes she’s gotten everything she wanted in life, but she’s increasingly appalled at what her future self did to get there. Jennifer Garner is wonderful in the role of a thirteen-year-old in a thirty-year-old body. Jenna’s naiveté and childlike wonder could have so easily been cringy and annoying in the hands of a less capable actor, but Garner manages to come across as sweet and charming while holding a sense of confidence and determination that is hard to find in a lot of insecure thirteen-year-olds.

Mark Ruffalo plays Matt with a laid back coolness that is perfectly balanced with lingering vulnerability at being ditched by his best friend and crush at thirteen. His resistance to Jenna re-entering his life in such a confusing way is understandable, but also extremely endearing because you can see how easily he’s charmed by her. The two have some pretty amazing chemistry, and I’m willing to forgive the fact that Matt has a fiancée, given we see her a total of two or three times and she’s essentially the catalyst for Jenna realizing that she can’t really turn back time to right her wrongs. She has to start from the beginning to make things right.

There’s nothing I really dislike about this film other than Jenna’s hockey player boyfriend. What a doofus he was, I just didn’t understand what a power-hungry diva boss like Jenna would ever see in him besides his “celebrity” status. The horrible strip tease to Ice Ice Baby was humorous if only for Jenna’s horrified reaction to it. Yes, there are a dozen and one question about how the magic dust worked and the plausibility of the plot and blah, blah, blah, but I don’t care. I wanted to be entertained, laugh, and watch a sweet romance blossom and I got all of those things from 13 Going on 30. I also got an amazing dance sequence to Thriller, which will always make a Top 10 (maybe Top 20) list of the best rom-com moments.

The movie touches upon what we can and can’t achieve when we lack a moral compass. Obviously, it’s better to be a good person than a back-stabbing bitch, even if the latter makes the path to success much easier. Jenna was able to see who she turned out to be, and with a second chance, become who she really wanted instead. 13 Going on 30 doesn’t break any new ground in terms of the genre, but it’s a sweet, funny movie with a captivating performance by Garner and a swoon-worthy leading man in Ruffalo.

And I won’t lie, I believe the scene between Jenna and Matt on the swings in the park is one of the most romantic scenes in rom-com history.