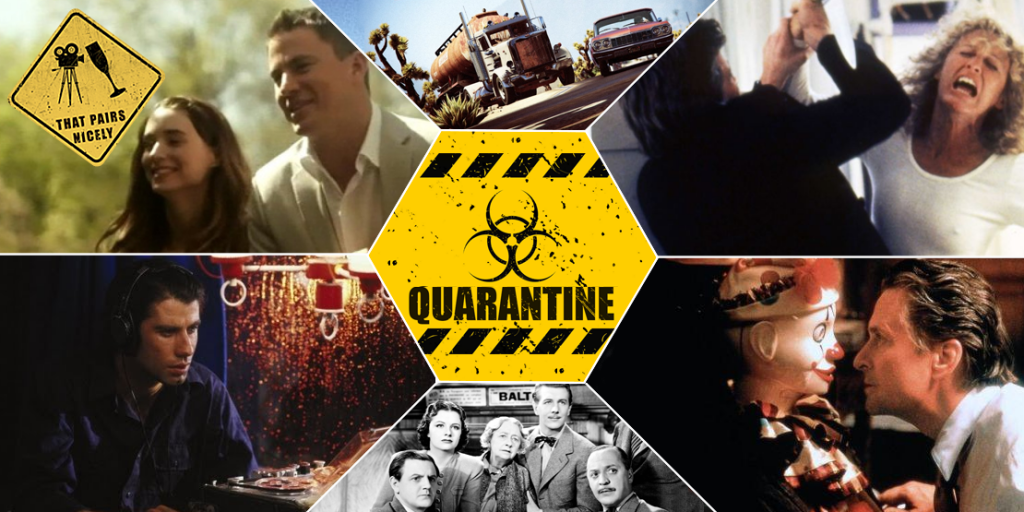 Here at ScreenAge Wasteland, we’ve selected six films that you should watch during quarantine if you’re in the mood for some thrillers!

Holy shit, this movie is something. I bought this film about a month ago, and while I was paying for it the cashier remarked, “The only unbelievable part in that movie is that anyone would find Glenn Close attractive.” While I will admit that whatever weird ’80s hairdo she’s sporting is doing her no favors, she is otherwise a beautiful terror. The lengths Close’s character goes to in order to push Michael Douglas’s character into a relationship with her is insane. There’s a tap cassette scene that is apparently verbatim what was said to someone who worked on the film. It’s an intense psychological thriller that will have you on the edge of your seat for the whole runtime.

Hitchcock’s filmography is so strong, that even his underrated films are masterpieces. The Lady Vanishes is far from underrated but compared to the rest of his films, it doesn’t get talked about nearly as much. Considered by Truffaut and Welles to be his best film, The Lady Vanishes is peak Hitchcock. It’s a mystery thriller (While travelling in continental Europe, a rich young playgirl (Margaret Lockwood) realizes that an elderly lady seems to have disappeared from the train) that also has a bit of action and is arguably the funniest film he ever made. The cricket-obsessed duo Charters and Caldicott (Nauton Wayne and Basil Radford respectively) are probably the most entertaining characters in the director’s entire oeuvre. Suspense, gunfights and comedy — what more do you need?

De Palma has several notable films, but this is the one that I have returned to most of his. I would argue it is his best. The story of a movie sound specialist who finds himself in danger after accidentally recording an accident that could turn out to be murder is a taut thriller with some Hitchcockian flair. The performances by John Travolta, Nancy Allen, and John Lithgow help elevate this into a must-watch for any fans of thrillers out there. Lithgow is straight-up menacing. The ending will leave you shooketh.

David Fincher has directed so many great thrillers, it’s hard to just pick one. But I’m gonna anyway. I think one of his lesser talked about ones is The Game, starring Michael Douglas and Sean Penn as estranged brothers Nicholas and Conrad Van Orten. Nicholas is haunted by seeing his father commit suicide on his [dad’s] 48th birthday, while his own 48th birthday is right around the corner. Conrad surprises his brother with a mysterious gift of the “Game” offered by a company called Consumer Recreation Services (CRS), which he promises they “will make your life fun”.

Unsure of what to think of this gift, Nicholas visits CRS and is subjected to lengthy and time-consuming psychological and physical examinations which irritates him and he is ultimately rejected for the game. However, soon after Nicholas begins to believe that his business, reputation, finances, and safety are at risk and he encounters someone who claims to have been endangered by the Game. He contacts the police, but they find the CRS offices abandoned. And the mystery begins to unfold.

Perhaps only Steven Soderbergh would be ambitious enough to resurrect an all but forgotten sub-genre in the thick of IP-blockbusters and biopics. Not to mention maybe the only auteur crazy enough to pull it off without a hitch. I mean, when was the last time you saw a grade-A mid-level thriller that wasn’t borrowed from a book or made in the 90s?  This corner of niche filmmaking was starving for vitality and in 2013. Soderbergh brought it back to life when he put Rooney Mara, Jude Law, Catherine Zeta-Jones, and Channing Tatum at the center of a rare sort of thriller that both salutes the conventions we all grew to love while it re-imagines the troupes all together.  Of course, though, none of it is overt; it just feels, lived-in and real. Classic Soderbergh. Anyway, I’m a sucker for that $15-$30 million range thriller that keeps you guessing. Anchored by deliciously twisted performances from the two leading ladies, Side Effects is a tour de force in the sense of a nice afternoon in the park that turns into something much more harrowing but you won’t leave.  As we’ve grown to see with a Scott Burns script, throughout all its high-thriller entertainment value, an astute commentary surrounding the American pharmaceutical system plays out perfectly through the prism of a fractured and recently scored wife.  Jude Law’s the prime 1% everyman serving as vehicle, a doctor known for readily pushing the next hot drug on the market for a little extra cash. No perfect patient to prescribe it to than a high-society wife who finds her world unraveling. Thus, we posit the question:  Is she mentally ill or simply murderous? Whether the question is answered or not, it’s the perverted arena of big pharma that sets the table for plausibility. And the journey Soderbergh curates is so wonderfully genre, yet rooted in authentic performances, that you find yourself not necessarily wanting to watch it again immediately after … but you’ll likely revisit it three times in a month.  That’s the handiwork of a master craftsman understanding the board of which he’s setting his pieces.

Maybe the greatest made-for-TV movie ever created, Stephen Spielberg’s second feature-length outing manages to do a lot with very little. Essentially a slasher movie in which the unstoppable killer is a rust-covered Peterbilt tanker truck, it’s also a monster movie and a chase flick. Dennis Weaver as everyday schlub David manages to piss off the wrong truck driver, leading to an escalating game of cat-and-mouse that becomes more tense and horrifying as the film goes on. Yeah, it’s a 1971 Movie of The Week – but it’s fantastic nonetheless and the decision to never show the truck driver (excepting an arm and a boot) pushes a standard road rage flick into something almost supernatural. With a lean script by genre stalwart Richard Matheson it’s a piece of small screen magic. It’s not perfect – Weaver’s voice-overs are less  than stellar – but it’s well worth the 90 minute running time and still manages to get the blood pumping nearly 50 years later.

What are some thrillers that you have watched recently?