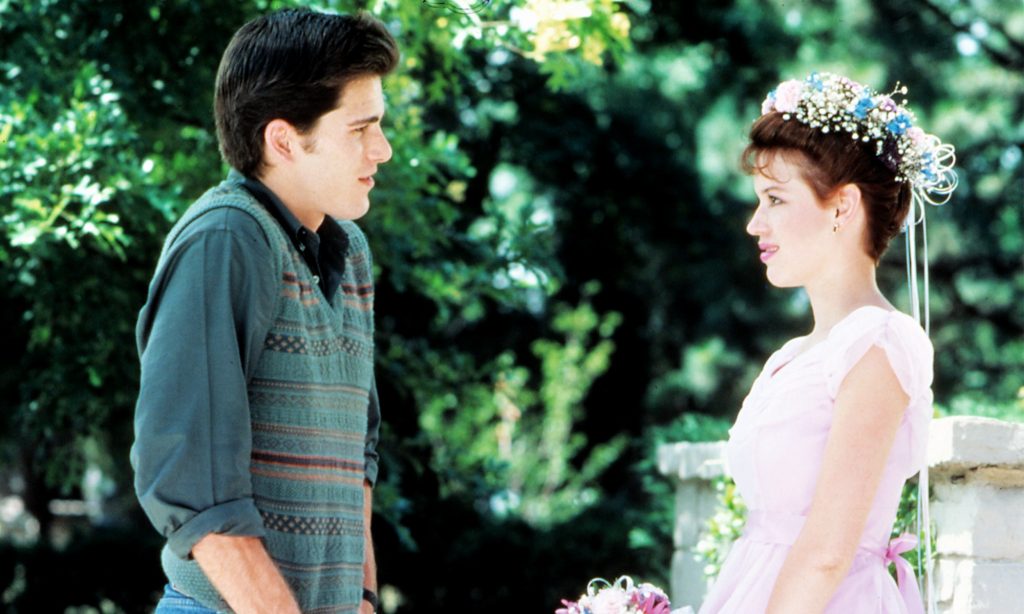 Being a big fan of John Hughes, it always seemed odd that I had yet to see Sixteen Candles. There’s really no rhyme or reason as to why. It’s just a movie I’ve never sat down to watch. So I finally made the choice to finally see if it lived up to its legacy.

When I mentioned that I would be watching this movie for the first time, I had more than one person tell me to remember the era in which the movie was made, making it pretty obvious that there would be some problematic aspects to deal with. I get it. Sixteen Candles was made in a different time, when offensive stereotypes were deemed okay, homophobic slurs were acceptable, and date rape was just a funny subplot. I know sometimes you have to just recognize and accept that certain things were okay “back in the day” and try to put those things aside in order to try and look at a movie more objectively. But look, even if I did that, Sixteen Candles is just not a good movie.

There’s a lot going on. Sam Baker (Molly Ringwald) wakes up on her birthday, which also happens to be the day before her sister’s wedding, so the family is dealing with a lot, and they all forget her birthday. Sam’s grandparents come to stay for the wedding, and they bring a foreign exchange student named Long Duk Dong (Gedde Watanabe). Geeky Ted (Anthony Michael Hall) has the hots for Sam and aggressively pursues her, despite her obvious disinterest. The popular, wealthy dreamboat Jake Ryan (Michael Schoeffling) has a popular, pretty girlfriend, but she’s more interested in partying than love, so he’s on the hunt for someone new, namely Sam… because he happens to intercept a private note where she tells a friend she’s a virgin, but would lose it to Jake, if she could.

The movie felt messy without anything resembling a cohesive narrative. And frankly, it’s not very funny, and it’s not very romantic. The only part I found mildly amusing was the wedding of Sam’s sister Ginny, who took four muscle relaxers prior to the ceremony. Jake and Sam have no real interaction until the last few minutes of the movie, instead of depending on the Geek to assure the other that the other is super into them, and then at the end, they have this super romantic moment that just feels insincere and rushed.

I suppose I was hoping for something closer to Some Kind of Wonderful, or The Breakfast Club. Movies that have character development, genuine laughs, and an emotional core. Sixteen Candles just felt flat and charmless. By far one of John Hughes’s weakest films.

But… it does have Joan Cusack, whom I love. So thank you Joan, for giving me something to enjoy in this movie.