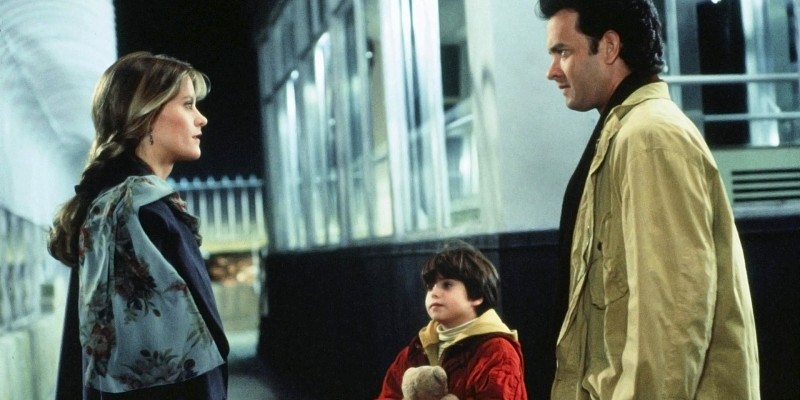 To celebrate Screenage Wastleland’s anniversary, I thought it would be fitting for me to celebrate by talking about my very favorite romantic comedy of all time.

It was the first rom-com I ever saw in the theaters and while Big might have sparked my lifelong crush on Tom Hanks, Sleepless in Seattle cemented his place as my favorite romantic leading man.

Let’s just get the obvious out of the way first. I understand that Annie’s behavior is probably a bit stalkery, and yes, I’ve watched the fun fan-made trailer on YouTube that re-cuts Sleepless in Seattle as a psychological thriller. But I was twelve years old when I saw this movie, and it sparked my love for romantic movies, and frankly, Tom Hanks and Meg Ryan could film a movie dressed as sprouting potatoes who fall in love and I would watch and love every second. So am I willing to overlook some of the more problematic overtones of the movie? Yes, yes I am.

After getting engaged, Annie Reed (Ryan), who lives in Baltimore, listens to a late-night radio show on a drive to her future in-laws’ house for Christmas. It’s on the radio that she hears the voice of Sam Baldwin (Hanks), a widower whose young son Jonah (Ross Malinger) has called into the radio show to help his mourning father find a new wife. When Sam reluctantly begins to talk about everything that made his late wife special, Annie begins to wonder how happy she really is. Her fiance, Walter (played by a delightfully doofy Bill Pullman), is a perfectly nice man, but there seems to be something missing between them. A sense of magic, perhaps.

Annie isn’t the only one who heard Sam’s sweet story, because suddenly he finds himself bombarded with hundreds upon hundreds of letters from women all over the country. He’s a little weirded out, and simply doesn’t believe that the magic he felt with his wife could ever happen twice in a lifetime. So he begins to date a pleasantly bland woman named Victoria, much to the displeasure of Jonah, who has read Annie’s letter and feels she’s the one his father is destined to meet.

This story is as much a father/son story as it is a romantic comedy. Sam and Jonah are both trying to navigate their grief, throwing themselves into projects that might distract from it. Sam, with his work and attempting to re-enter the dating scene, and Jonah, who is obviously trying to find his father a new wife, but also, a new mom for himself.

Annie is on the other side of the world, enamored with a man she never met, but also struggling with her life’s choices. You see, Annie doesn’t believe in “signs” of fate until the signs are there in front of her own eyes. She clearly loves Walter, but does she love Walter. Love, in the way that triggers sparks when they touch hands, or how she can just look at him and know he is the one for her. Annie has always been a practical woman, but she begins to yearn for a love that is anything but practical. She wants the magic as well.

As usual, Tom Hanks plays the everyman to perfection. Sam is just a regular guy dealing with life after his wife’s death and trying to raise his son on his own. He manages to make “ordinary” so appealing that yes, I could totally buy hundreds of women falling for his voice over the radio! Hanks nails the comedic timing needed to make the humor in this movie float, and it’s really no surprise to learn that his dinner scene with Victor Garber, who plays his brother in law, was completely improvised as the two of them cry over the war movie, The Dirty Dozen, to mock Sam’s sister (Rita Wilson) after she broke down describing the end of An Affair to Remember.

Bill Pullman and Rosie O’Donnell, who plays Annie’s co-worker and best friend Becky, both carry the comedic weight in the scenes that take place in Baltimore. Pullman’s Walter is a sweet soul, but a bit of a dork who is a predictable and safe choice for Annie, while Becky is the stoic, sarcastic BFF who encourages Annie to follow her heart before walking down the aisle and potentially regretting it for the rest of her life.

O’Donnell has the funnier part here, but I think the most important casting in this film was Meg Ryan. It’s incredibly important to have the right actress to play the pragmatic Annie because I feel like the wrong woman would have sent the premise of this movie off the rails, and it could have definitely turned into Fatal Attraction lite with the wrong lead (and director, but I’ll get to that). Annie needs to be sensible, clear-headed, and charming, but also convey Annie’s doubt and uncertainty in a way that is sympathetic and relatable. Is she doing a horrible thing by writing Sam behind her fiance’s back? Yes. Is she doing a terrible thing by lying to him and flying across the country to meet Sam? Yes. But Annie is aware of her flaws, and her mistakes, and it’s really hard not to root for her. In 1993, the only other actress I could conceivably see successfully pulling off this role would have probably been Sandra Bullock. Meg Ryan has all of the “girl next door” attributes needed to carry this film and not make Annie seem completely and utterly nuts.

I’ve been a huge fan of Nora Ephron ever since I saw this movie. I’ve loved her film work and I’ve loved her writing. She had three well deserved Oscar nominations for Silkwood, When Harry Met Sally, and Sleepless in Seattle. I can’t say her directing was as fantastic as her writing, but she had so much talent, and she was one of the few successful female directors in the 90’s. Ephron knew romance, and she had the mind and practicality to believably convey that romance on the big screen, even in a movie where the two lovers don’t even meet until the final fifteen minutes. How many romantic comedies made today could pull that off without it ending in total disaster?

Whether not you believe in magic or destiny, it can’t hurt to lose yourself in the idea of both, at least for 1 hour and 45 minutes. Sleepless in Seattle is a charming rom-com that more than delivers on the romance and the comedy. It’s fueled by Ephron’s wit and panache, and the always amazing chemistry between Meg Ryan and Tom Hanks. I unabashedly love this movie, and it will likely always be at the top of my list of favorite romantic comedies.