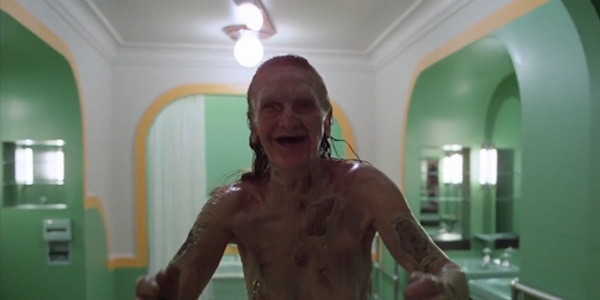 I don’t of many other characters to have such a small amount of screen time, no name and pretty much no other reason for being except to freak the bejeezus out of us to make as much of an impact as “woman in bathtub”. At first, we get the completely naked seductress that made a pretty significant impact in her own right looking all fine and nekkid. However, as Jack is caressing this voluptuous vixen, we suddenly see a decaying older lady with the creepiest laugh. What a swerve, Mr. Kubrick. It is something you can’t unsee and even if you haven’t seen The Shining, you most likely know about the woman in the bathtub.

Kay stands out as one of the earliest females in horror that wasn’t your typical heroine. She was smart, independent and could hold her own amongst her male counterparts. Julie Adams’s beauty along with her way to portray Kay’s vibrant and strong personality has helped her remain a horror icon for over 60 years. The shot of Kay swimming with the Gill-Man just beneath her will be etched forever in horror history.

Dani has had it rough. She is in a not so great relationship with someone who has already checked out, she then suffers an unthinkable family tragedy and her man is not able to offer any kind of emotional support. Because of all this, she suffers from anxiety but still wants to function as a “normal person” by experiencing an incredible trip with her boyfriend and his friends. From there Dani witnesses unspeakable things while confronting her grief, and finally realizing what kind of tool her boyfriend has been. For better or worse, we see a transformation in Dani as she finally gets some support from unexpected places.

Florence Pugh turned in a breakout performance here becoming one of the best modern horror characters. The range of emotion and depths she was willing to go was astounding. Dani should be a character that is talked about for a long time to come in horror history.

Talk about a toxic relationship, amirite? This may be a cheat but I don’t care. This cherry red 1958 Plymouth Fury seems like the type to post a selfie of herself after a good wash and comment “Might go to the drive-in with my boo. Might run over some bullies.” Either way, Christine is not only a horror icon but she is also one of the most well-known cars in movie history. She shows more personality than your average slasher movie character and witnessing her gnaw her way into a loading dock to kill Moochie is one of the best horror scenes of all time.

Stretch (that nickname has to be because of them legs, right?) is a local DJ at a rock station in a small Texas town. That already makes her cooler than most other characters and she has a spunky personality that is instantly likable to both male and female viewers when we first meet her in the DJ booth. She has a mouth on her and she knows how to handle herself which comes in handy when Chop Top and Leatherface show up. Stretch is one of the few to survive the Sawyer family.

At some point in your life, you have either said or at least heard someone say, “This house is clean” or “Go to the light!” in form. Tangina looks like a tiny grandma with her huge glasses but ends up being a paranormal badass. She came into help the Freeling family and she did just that. In the middle of one of the best horror movies of all time, Zelda Rubenstein was able to create a memorable character in a short amount of time that stands up with the other iconic images and characters in Poltergeist.

It’s rare that a character is as universally hated as Mrs. Carmody. She struck a chord with everyone because we all know a person that would instantly become Mrs. Carmody the moment all hell breaks loose. Marcia Gay Harden did such a great job at being so detestable that her character became more of a threat than the Lovecraftian type monsters that were wiping out humanity. She was so awful that it would you want to cuddle up next to one of those flying death monsters than spend another moment locked up with her while she spewed her religious nonsense.

Suspiria is the most recognizable Italian horror film for a number of reasons: Argento, the colors, the kills and Jessica Harper as Suzy Bannion. Harper’s doe-eyed and frightened ballet dancer, Suzy, is instantly recognizable to any horror fan and even most non-horror fans have seen her petrified mug a time or two. The great thing about Suzy is she a “final girl” who could save herself but wasn’t some badass. She is often fragile but never gives up and keeps fighting to unravel a dangerous mystery.

Alice was the first final girl of the Friday the 13th franchise and she went toe to toe with killer, Mrs. Voohees. As her counselor friends were dropping one by one from grizzly murders, Alice was able to avoid harm until she had a final showdown with the grieving and crazy mother. She was just an innocent counselor who wanted to give kids a great experience at summer camp but ended up having to behead a psycho with a machete in great horror moment.

But the most iconic moment happens when Alice is pulled underwater by young Jason in a dream sequence, first introducing the monster who would become the world’s most recognizable masked killer.

Margot is best known for her role as Superman’s love interest Lois Lane. However, to horror fans, she will always be the heavy smoking, heavy drinking smartass sorority chick from Black Christmas. She isn’t put off by the strange and crude prank phone calls to her sorority house from the killer. Barb didn’t take any jive off no turkeys. Giving an ignorant police officer a lewd sexual act as the number to the sorority house will always be classic.