Jetpacks, lazers, walking eyes — Is there any genre of film as infinitely creative as sci-fi? Since most films within the genre deal with non-existent technology, filmmakers are limited only by their imagination and because of this, we’re gifted with a wide assortment of different stories. From time-traveling robots to alien invasions and even the occasional space opera, sci-fi is the epitome of cinematic freedom. Science fiction is what happens when the real meets the almost real and in the middle of that lies boundless opportunities. This list is the definitive ranking of films that best represent both halves of the equation. 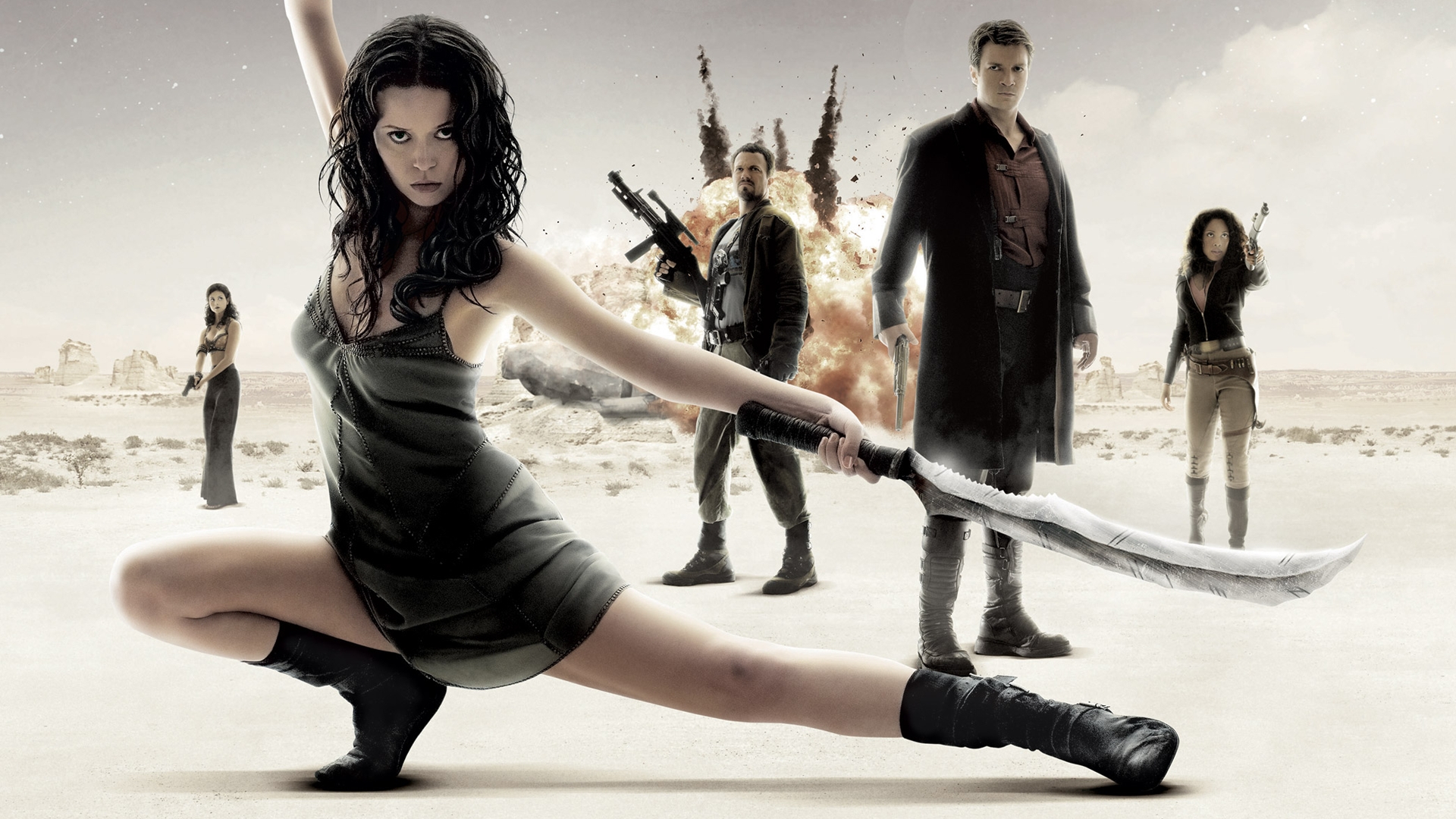 One of the best examples from the power of the people actually working. Well, in entertainment means anyways. Firefly was a sci-fi TV show hit and was abruptly canceled before the end of the first season by the “powers that be” at FOX and the fans were furious along with all involved with the show. This sci-fi western show about a lovable motley crew of criminals, a holy man, a companion (an esteemed prostitute really), and a couple of fugitives deserved some justice and in 2005, we all got it.

Joss Whedon and co. came out with Serenity to give fans a satisfying ending to a story they began during the original episodes. Captain Malcolm Reynolds (the great Nathan Fillion) and his crew were finally able to go to battle with the evil Alliance as we learn who or what exactly the quirky, weird, badass River is. The reavers were a nasty group of boogeypeople who were only spoken about in dark hushed whispers and never revealed during the initial run. Not only did fans get a satisfying end the Firefly story but we got one hell of a sci-fi movie out of it. Excellent visuals and dialogue in an action-packed story with characters you can instantly love or hate without watching a second of the show. 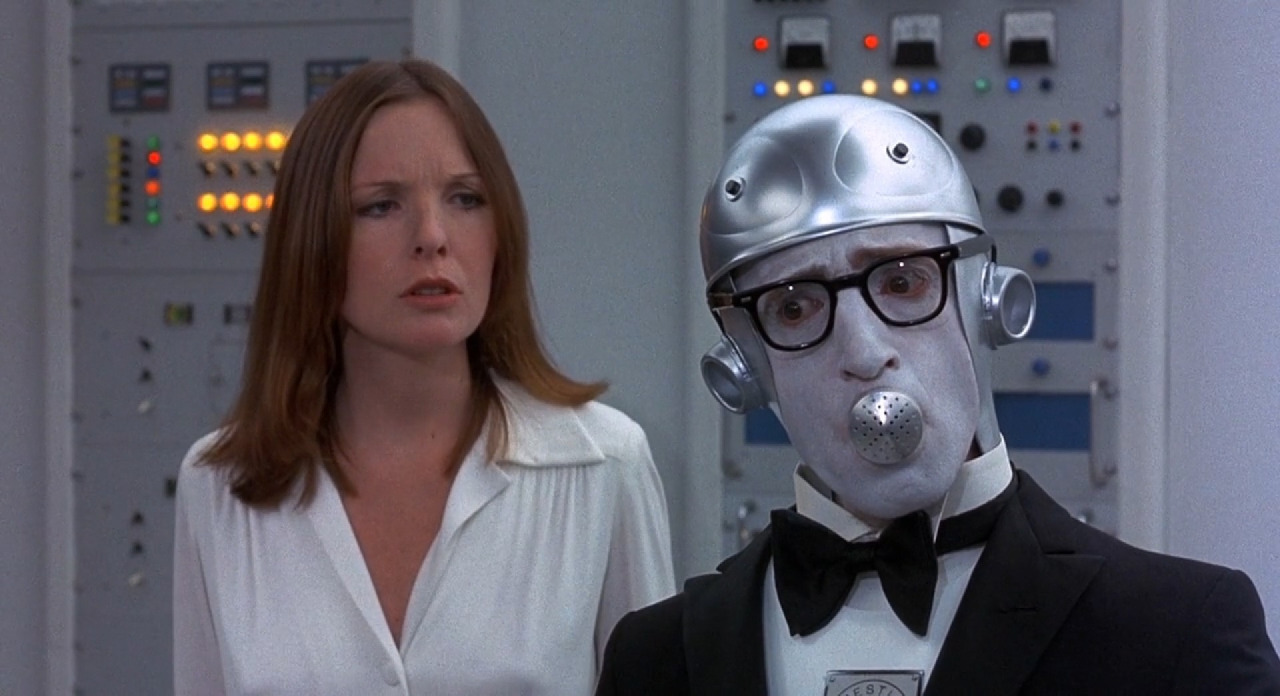 Arguably his only parody (and definitely his only genre film to date), Allen broke from his trademark self-reflexing nebbish shtick to make Sleeper, and the end result is not only one of his best comedies but one of the funniest sci-fi farces ever. After awakening from being cryogenically frozen, a health food store owner unwittingly becomes a pawn in the middle of a battle against a dictatorial government. Mixing the satirical with the slapstick, this is Allen’s attempt at transporting the style of Chaplin into the far future and in many ways, this feels like the best film he never made. Loaded with outlandish visual gags, rapid-fire quips, and a cast that’s game to do anything, Sleeper is the best of Allen, the best of Chaplin and the best of sci-fi all rolled into one hilarious package. 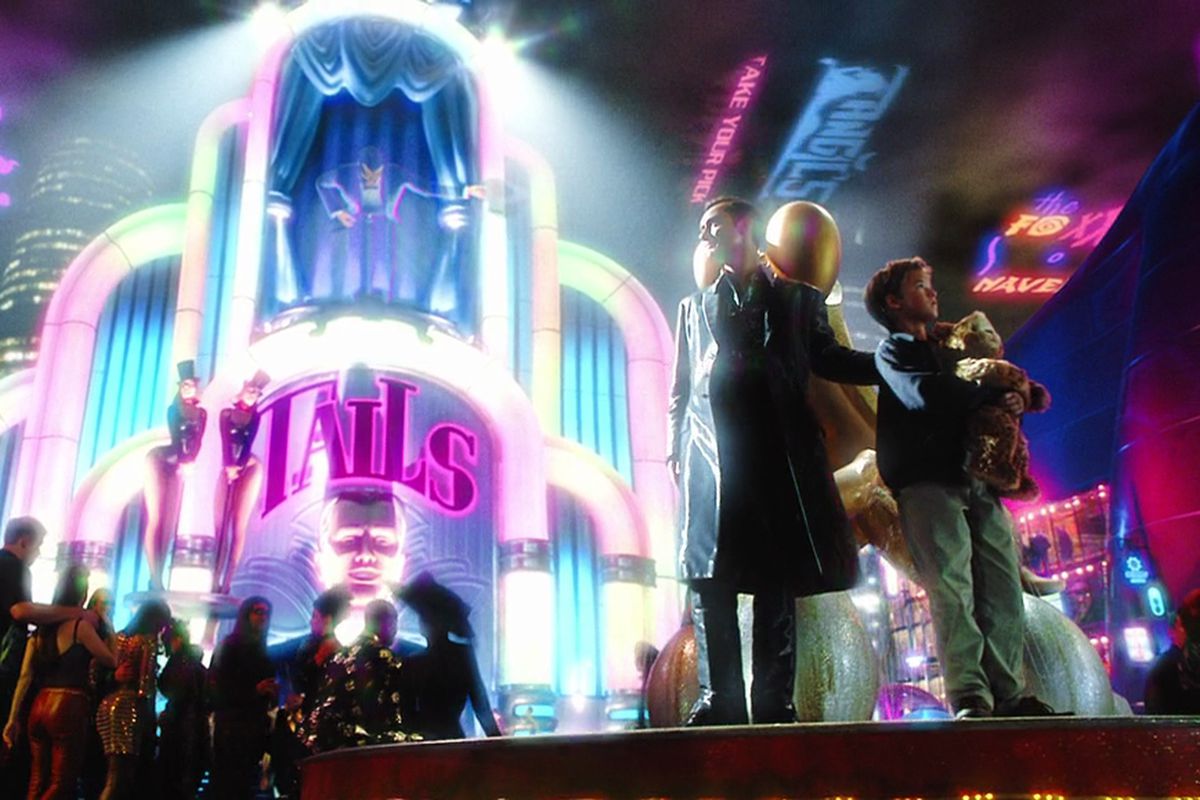 Given that it saw beloved director Steven Spielberg taking over a project from one of the most acclaimed filmmakers in the history of the medium, the late Stanley Kubrick, it was inevitable that some would be disappointed by “A.I,” and it took a relatively long time for the film to be greeted as anything other than a missed opportunity. Fortunately, it’s now won a fair chunk of cinephiles over and is certainly seen as, if not Spielberg’s most lovable work, one of his most interesting. Riffing loosely on “Pinocchio,” the film follows Haley Joel Osment’s child ‘mecha,’ rejected by his real parents and heading out in search of a way to become a real boy. It now stands as a perfect meld of the two visionaries behind it and one of Spielberg’s most meticulous, complex, and haunting works, and one well worth revisiting if you rejected it the first time around. 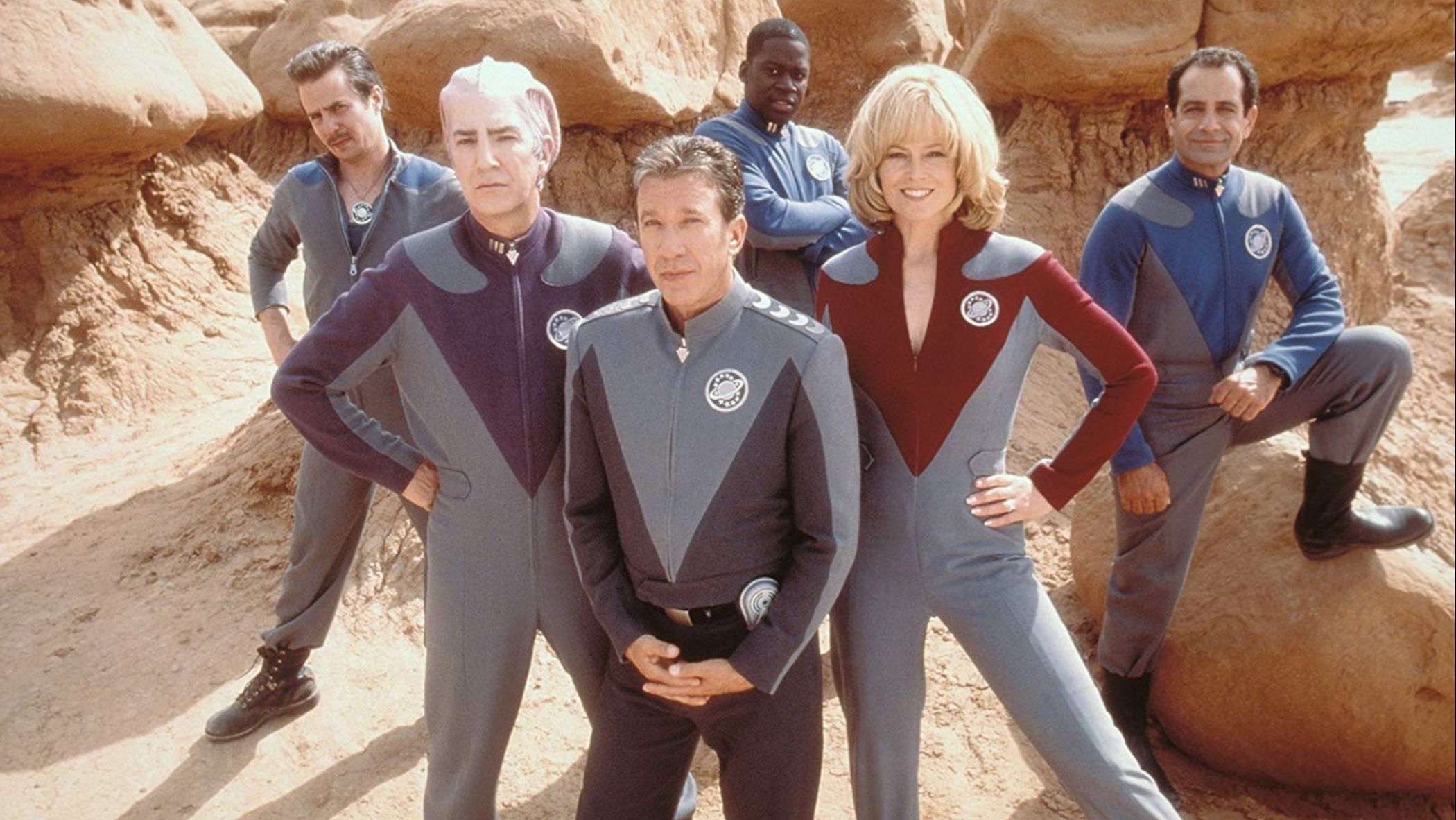 Ruth Berman wrote a Star Trek story called “Visit to a Weird Planet Revisited,” in which William Shatner, DeForest Kelly, and Leonard Nimoy find themselves transported to the REAL Enterprise and have to pretend to be their iconic characters. I always loved that story and sitting in the theater, watching Jason Nesmith and the other actors of Galaxy Quest wander through the halls of the NSEA Protector I realized that this was probably the closest I was ever getting to seeing that story on screen. And that it was pretty damn fun.

Galaxy Quest seemed to come out of nowhere. Certainly, I hadn’t heard much about it, other than it was kind of a parody of Star Trek. It’s much more than that. My brother Jeff and I always say that it was a much better movie than we had any right to expect. It managed to make fun of its inspiration as well as express affection and admiration of the same while also telling an engaging story and providing some fantastic characters. I always hoped for a sequel – though without Alan Rickman it wouldn’t be quite the same. Full of action, adventure, a dash of pathos, and plenty of comedic introspection, Galaxy Quest was the sci-fi film 1999 didn’t know it needed.

To quote Alan Rickman as Alexander Dane as Dr. Lazarus, “By Grabthar’s Hammer. What a savings.” 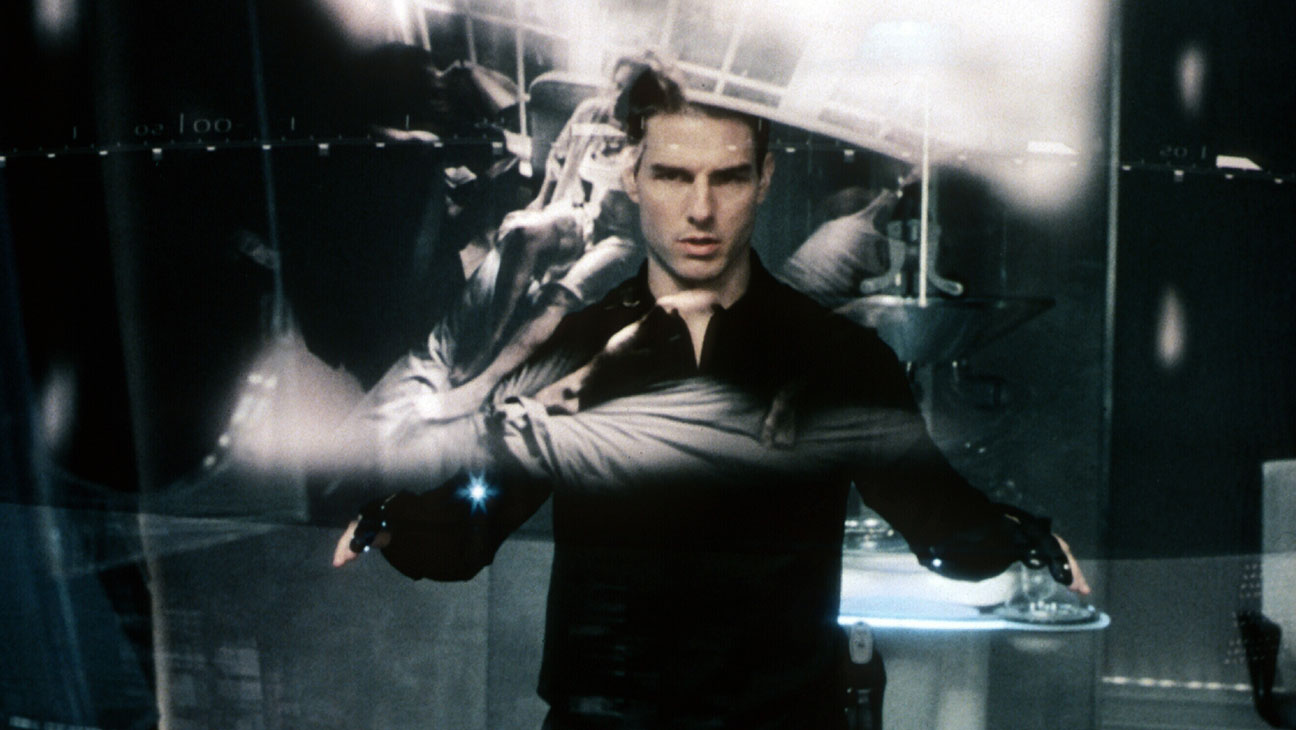 It’s 2054. Scientists have reduced the murder rate to zero in Washington, DC, with ‘Pre-crime’ – a police unit that taps into a trio of ‘precogs’ (psychics who get glimpses of the future) to predict murders and arrest the perpetrators before they do anything wrong. Fingered as a future murderer, Police Chief John Anderson (Tom Cruise) must run for his life if he is to piece together the mystery of who the man he’s supposed to kill is and more importantly, why he’s going to kill him. An action thriller that raises moral and ethical dilemmas about free will, as well as an excellent predictor of future events (Spielberg consulted leading scientists to furnish a plausible future world, and two decades later – from retina scanners to personalised advertising – he was spot on), Minority Report remains one of the best genre films the director ever made. 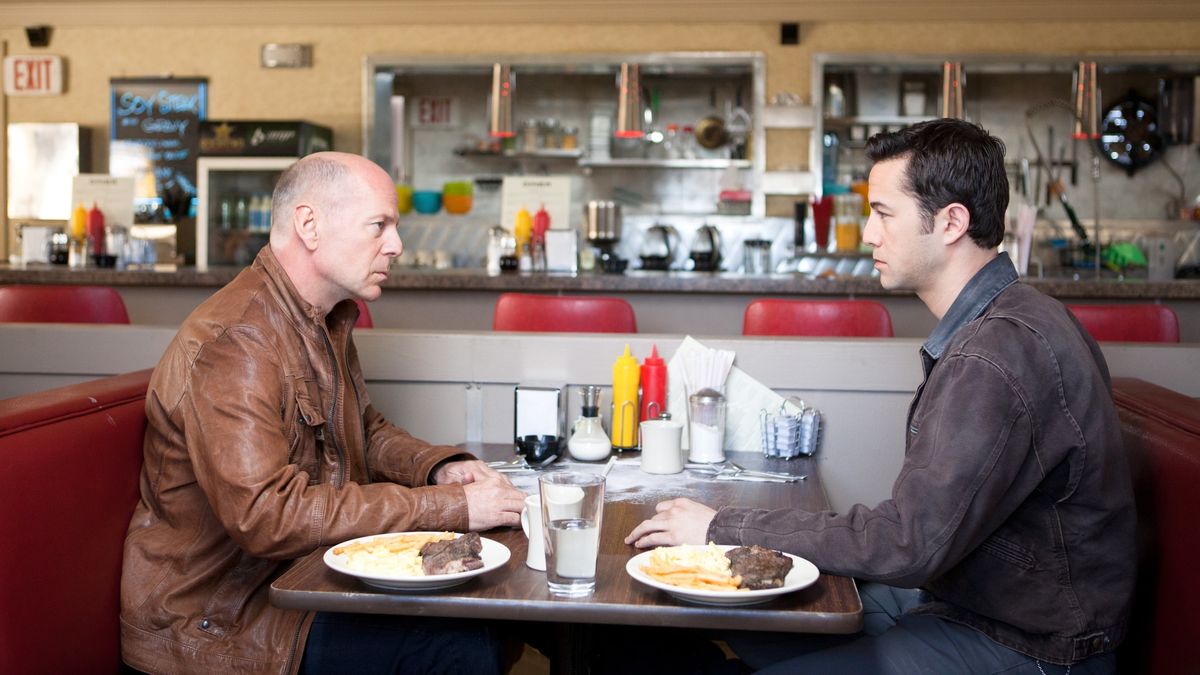 While the dilemma the film presents—which is essentially whether or not you would change the past to save yourself, change the past in order to protect the present or change the present to save the future—is nothing new or novel among time travel films, I don’t think a film has done it as well before or since. Rian Johnson didn’t just craft a well constructed time travel story, he created a unique vision of the future. There’s the silver bars as currency, blunderbusses as means of assassination, people who can levitate coins with their mind, and time travel as means of human disposal. There’s a ton of new rules and lexicon you gotta pick up but once you do, it’s off to the races.

Once the film disposes of the exposition (which it does rather quickly), the film starts moving and it never stops. In addition to the remarkable world-building, uncommon story, and fantastic lead performances (Willis hasn’t been this good in a long time and probably never will be again), it somehow finds time for a romantic subplot. The two hitmen maybe the stars of the film but Blunt is the film’s true MVP. She commands the screen as effortlessly as fellow sci-fi legends Ripley and Sarah Connor but feels far more real and relatable than either one of them. She’s the glue that holds this film together and helps it pull off a near-impossible hat trick: a film that’s equally cool and smart as it is heartfelt. 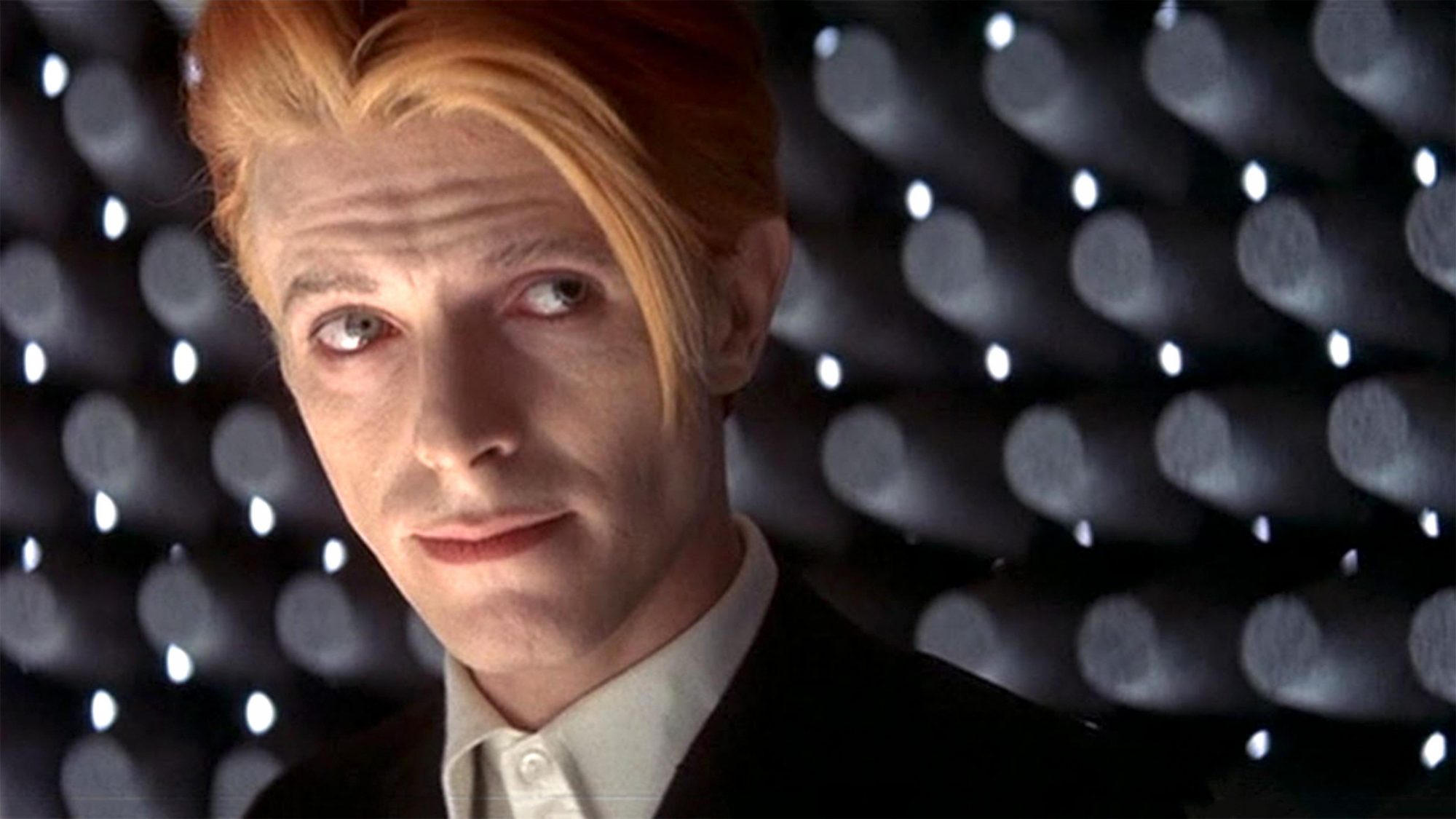 If you don’t love David Bowie then I really don’t want anything to do with you. No. Really get out. In his first starring role, Bowie gives an eerie performance who plays an alien in search of water for his drought-stricken world. It feels like a role Bowie was born to play. Well, and Jareth the Goblin King. Nicolas Roeg set out to make a unique film that isn’t your typical sci-fi film with world’s colliding and over the top special effects. It was character-focused and dealing with ideas that were thought-provoking instead of popcorn fun and would end garnering a cult following. It is a film that would inspire a generation of experimental sci-fi movies. 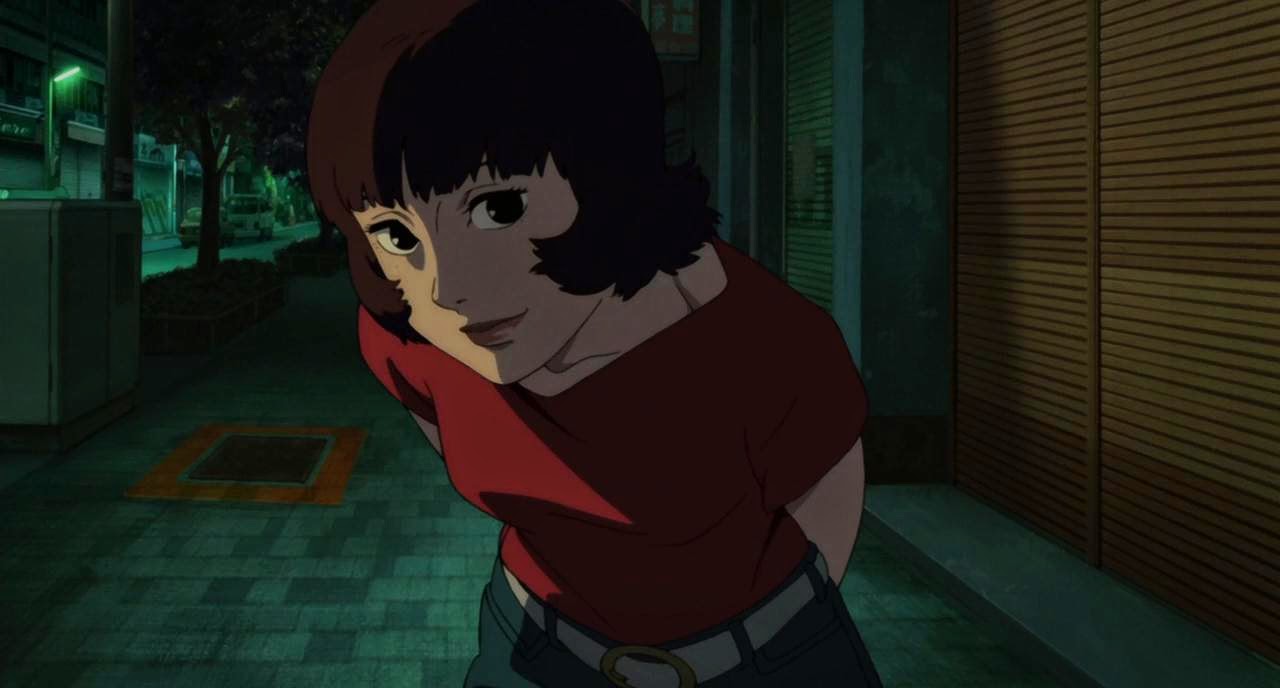 If Satoshi Kon hadn’t died of pancreatic cancer in 2010, I truly believe he would’ve gone on to become the greatest anime director of all time. He only made four films in his tragically short career but each one is a masterpiece. Covering diverse topics such as obsession, homelessness, dreams, and Alzheimer’s, Kon didn’t cater to the lowest common denominator. He told the stories he wanted to tell, regardless of whether or not they’d appeal to mass audiences.

Based on a novel of the same name by Yasutaka Tsutsui, Paprika is a cinematic mind fuck. Not in terms of content but in execution. Every ten minutes you’ll think to yourself “how the fuck did anyone make this film?” The editing in Paprika is on another level. He’s doing shit in this film you can only accomplish in animation. It’s pretty astonishing and that’s only one element to this film. Paprika is a visual triumph that assaults the viewer with visuals he’s never seen and with a story that will never be told better. It’s a one of a kind masterwork from a genius that left us far too soon. And If one more fucking person says Nolan ripped this film off for Inception, I’m going to stab someone. 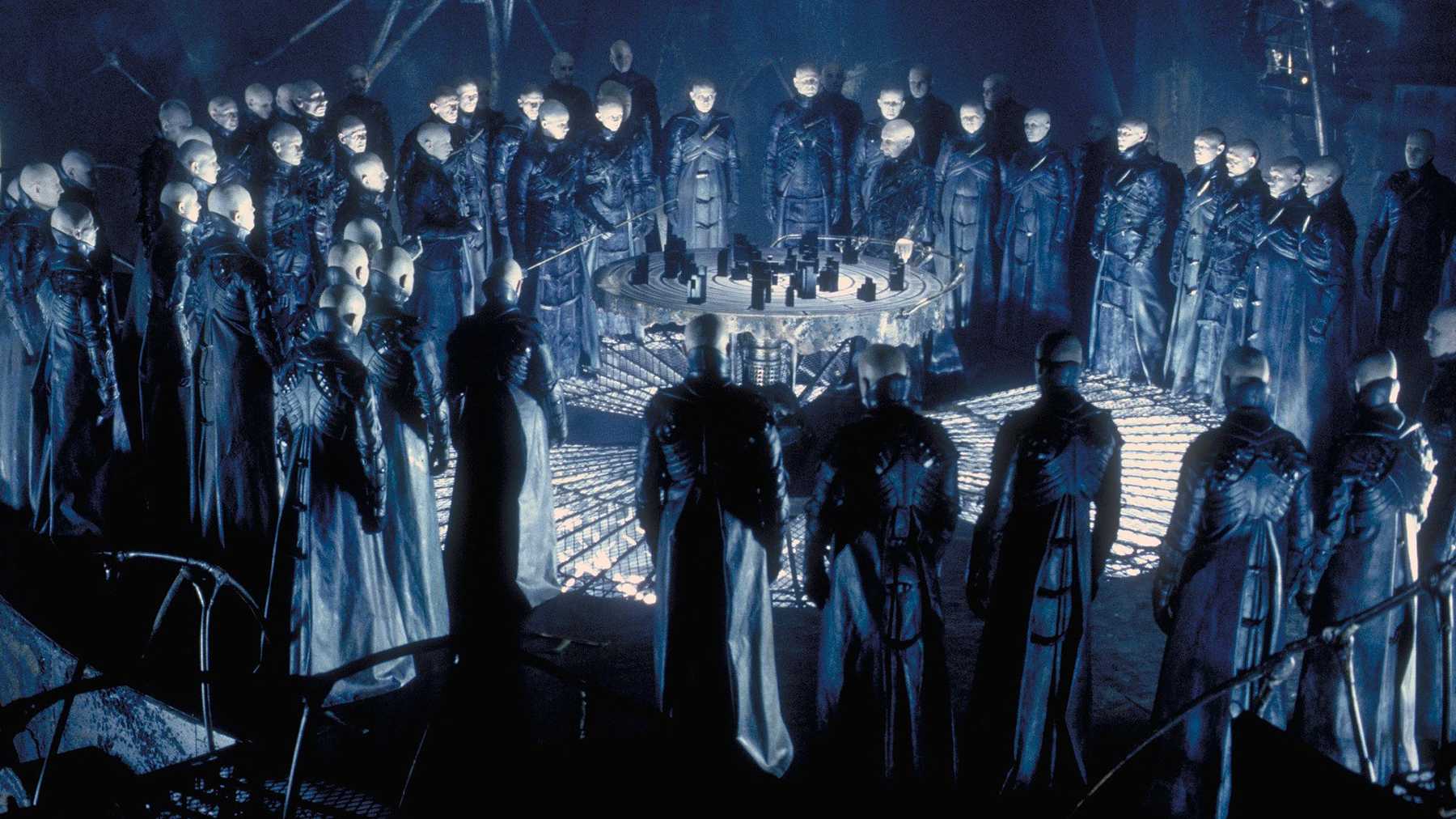 Alex Proyas’ third film, Dark City is a heady blend of high-concept sci-fi, neo-noir detective story, and epic super-powered conflict. I’m a sucker for amnesia stories, so I was sold from the first few minutes when Rufus Sewel’s John Murdoch awakens in a bathtub with no clear idea of who he is – or what terrible things he might have done. Pursued by a group of creepy, bald, powerful creatures (looking like a race of Riff Raffs), Murdoch tries to survive in a city where it is always night, buildings move and change, and any given person may not be who they were yesterday.

Dark City was a moody, noir Odyssey, with a psychic twist and an addictive, driving soundtrack. William Hurt, Keifer Sutherland, and Jennifer Connelly are excellent in rich supporting roles and a final battle between Murdoch and the leader of the alien Strangers feels like the start of a super-hero origin or the end of an unreleased Otomo-inspired anime. It didn’t make a huge splash when it was released, but you can feel its ripples in films like The Matrix. 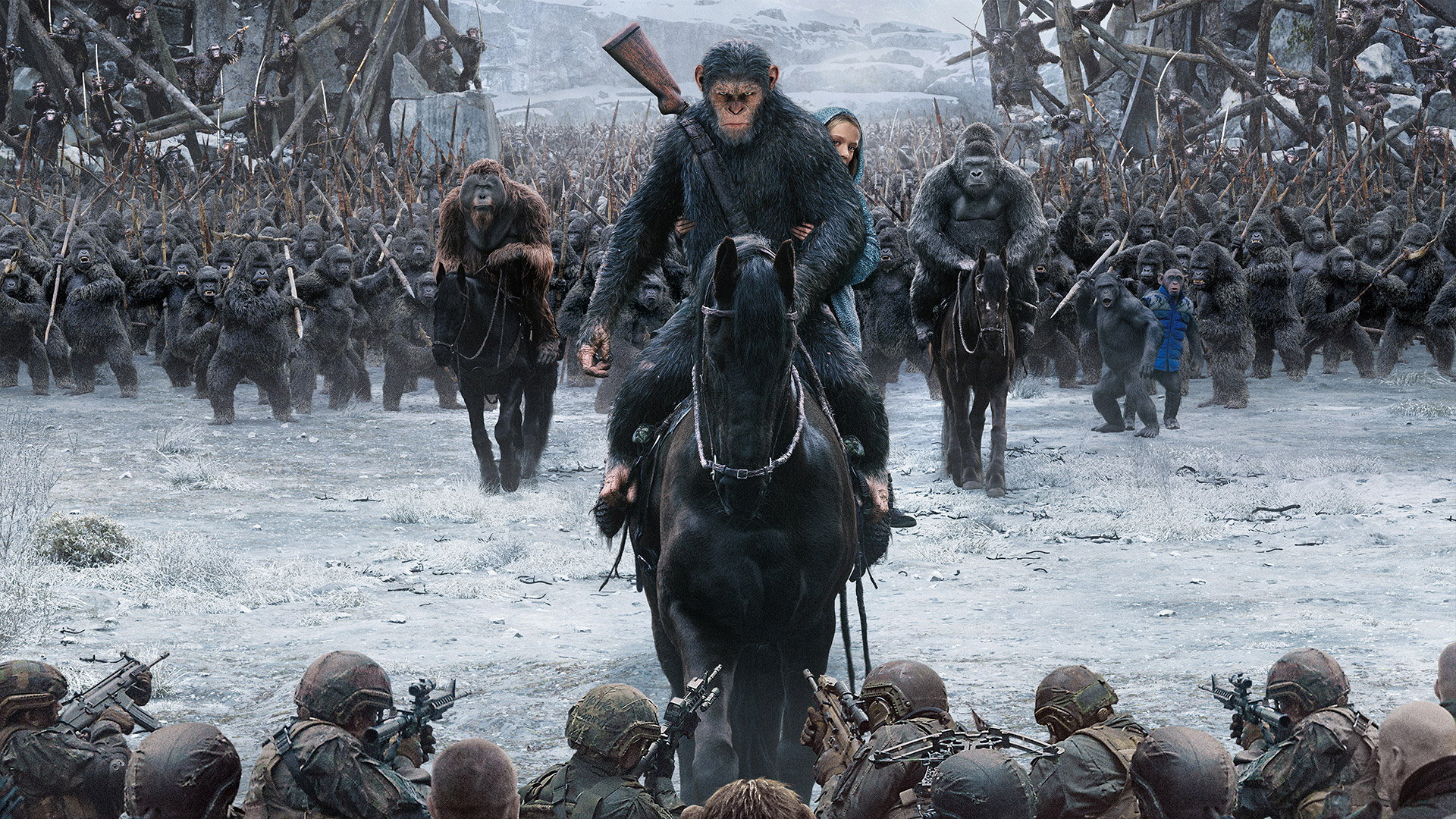 There are few franchises as unique and inexplicable as the Planet of the Apes. Broken into different categories, the series consists of: *deep breath* the original pentalogy that deals with wacky time travel shenanigans, two separate animated series that sort of kinda follow the movies, the critically reviled Tim Burton reboot and then lastly, the critically acclaimed second reboot trilogy. While no individual entry is downright bad (the Burton one doesn’t make any sense but it did have next level make up effects and an amazing performance from Tim Roth), the “Caesar trilogy” is hands down the best of the lot, with War being the best entry.

With humanity largely destroyed and apes the new gods of the earth, War is a fascinating spin on the post-apocalyptic tale in that you’re actively rooting for the apes to win even though they’re the ones who’ve killed an entire planet’s worth of people. It’s like rooting for the flood to win in a Noah’s Ark movie. But that’s how sympathetic and emotionally complex Serkis’ Caesar is. He imbues a CGI chimp with as much gravitas as he would a Shakespearean character. He’s the glue that holds the films together and it cannot be understated how good Serkis is in the role. Rise laid the groundwork, Dawn started the construction and War made a castle.