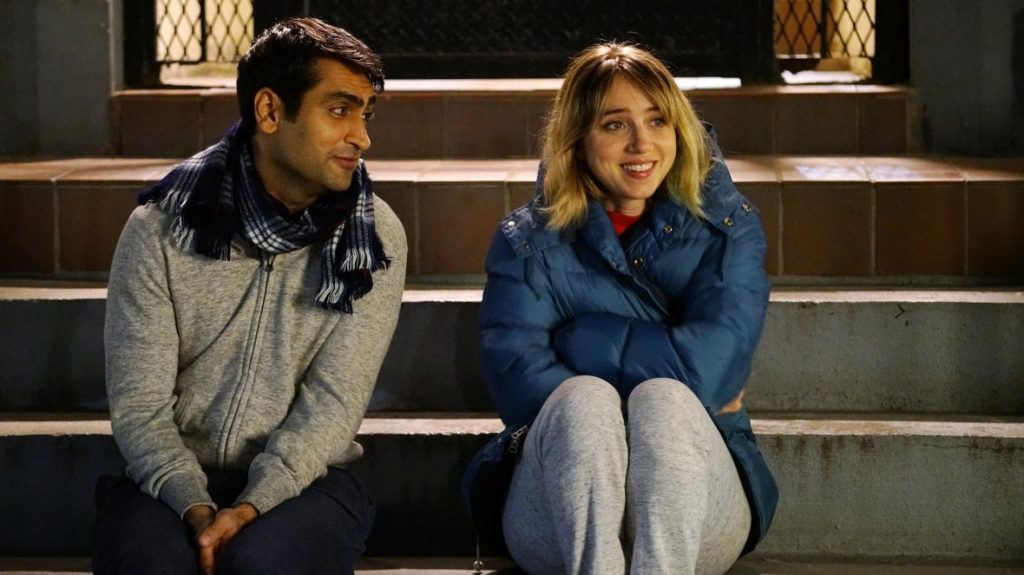 Aspiring comedian Kumail Nanjiani (Kumail Nanjiani) meets Emily (Zoe Kazan) at one of his shows and the two immediately hit it off. Despite the fact that Emily isn’t looking for a relationship, and Kumail’s parents expect him to marry a Pakistani woman, the two begin to date and quickly fall in love. Kumail’s mother continues to try and set him up with various women that she approves of, while Kumail hides his new relationship from his family. To his family, dating a white woman is worse than a hit and run, or check forgery.

Eventually, the familial and cultural pressures prove to be too much for Kumail, and he ends things with Emily. And then Emily ends up in a medically induced coma due to an undiagnosed illness, and Kumail is listed as one of her emergency contacts. At the hospital, Kumail meets Emily’s parents Beth (Holly Hunter) and Terry (Ray Romano), and Kumail begins to bond with them in an unexpected way, leading him to re-evaluate his feelings for Emily and his desire to please his own family.

The romantic comedy then becomes a romantic dramedy with Emily’s hospital stay, and director Michael Showalter expertly handles the shifting tone. Nanijani is excellent in The Big Sick. He’s a charming, self-deprecating wit about him, but can also play to the more dramatic moments with ease. I would love to see him in more leading roles. He and Kazan share the kind of tender chemistry that never feels forced, and despite her somewhat limited screentime, Kazan is really quite an enthralling force as Emily before she spends the rest of the movie in a coma.

I really loved this movie. It never follows the predictable route of a typical romantic comedy. You’re so quickly emotionally invested in Kumail and Emily’s love story, but the heart of the movie really belongs to Nanjiani, Hunter, and Romano. Their uncomfortable beginning (“9/11. What’s your stance?”) soon evolves into something much deeper. Romano once again proves his talent goes much deeper than Everybody Loves Raymond, and Hunter is magnetic as a no-nonsense, frightened mom who is just trying to remain strong in the midst of her daughter’s mysterious health scare. The three find some common ground, as awkward as it might be, and Nanjiani holds his own on-screen against two incredible performers.

The runtime is a bit long, yes, but it maintains a steady pace and keeps you invested up until the very end. There are really no bad performances in this movie. Kumail’s family are so charming and funny, and his stand up friends (Aidy Bryant, Bo Burnham) deliver some of the best one-liners in the film.

At the core of this wonderful film is a wonderful script. Nanjiani and Emily Gordon wrote the screenplay based on their real-life courtship, Emily’s mystery illness and all. They turn something that could have been tragic into something so heartfelt and funny while touching on so many themes – cultural differences, marital discord, deliberate and casual racism, stress and grief… everything is handled with grace and humor, which is why I think this movie was so successful, and absolutely deserved it’s Oscar nomination for best original screenplay.