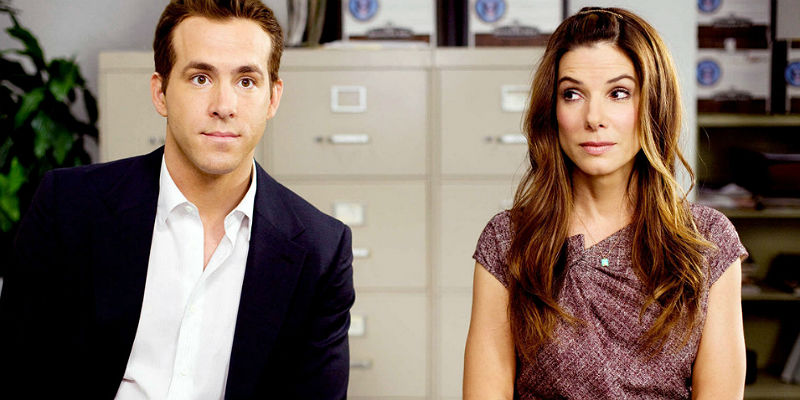 Margaret Tate (Sandra Bullock) is a no-nonsense, high powered book publisher who devotes her life to work and strikes fear into her employees. Her assistant, Andrew (Ryan Reynolds) has worked for Margaret for three years in hopes his loyalty and work ethic will lead to a promotion to book editor. When Margaret’s work visa expires, she is faced with deportation back to Canada unless she can find a way to stay in the country. Enter Andrew and her proposal that they get married. Andrew is understandably reluctant, but negotiates his way into a promotion should they be able to pull off this sham marriage. They inform a suspicious immigration employee (Denis O’Hare) that they’re announcing the engagement to Andrew’s family that very weekend in Sitka, Alaska, where they’ll be celebrating Andrew’s grandmother’s 90th birthday.

The Proposal is not original in any sense of the word. It borrows from other movies in the genre, like Green Card, Something’s Gotta Give and even Bullock’s previous rom-com, While You Were Sleeping, but that being said, it also has a witty script and a talented cast that made it extremely enjoyable. More importantly, it has Ryan Reynolds and Sandra Bullock. Bullock had already shown off her comedic chops in While You Were Sleeping (1995) and Miss Congeniality (2000), the latter of which had been her most successful comedic role to date, but Reynolds was not exactly a household name until The Proposal helped elevate him to leading man status. Their on-screen chemistry takes what is essentially one large rom-com cliche and creates a charming, winsome love story.

Despite the age difference, which is never really mentioned in the movie itself, and not really necessary anyway, Reynolds and Bullock convey just the right amount of attraction while bickering and expressing frustration with one another, and their situation. Margaret is Miranda Priestly lite, coldly chained to her work until circumstances (aka a broken phone) cause her to disconnect from New York. With nothing else to focus on, she is drawn into the warm circle of Andrew’s family, notably his mother (Mary Steenburgen) and grandma Annie (scene-stealer Betty White). Having lost her parents when she was younger, Margaret has clearly missed what it feels like to have a family, and Bullock is very subtle but effective in conveying Margaret’s vulnerability. No, she did not start out as a very likable character, but you see in these later scenes why she has been so cooly guarded against any kind of emotional attachment.

Reynolds plays Andrew with a constant air of exasperation and frustration, not only with Margaret but with his family. He is essentially being blackmailed into this marriage, though he has managed to create some of his own terms given the risk of prison time should the immigration agent conclude they’re lying to keep Margaret in the country. It’s clear Andrew hasn’t returned to Alaska much since moving away, and while that’s almost entirely blamed on Margaret working him constantly, it also becomes clear that he and his father Joe (Craig T. Nelson) have a very strained relationship. Andrew is an only child and Joe wants to retire, leaving the successful family business in Andrew’s hands. Of course, Andrew wants to be a book editor, which Joe dismisses as nonsense. He clearly loves his family but can only take so much arguing with his father, which is implied as to the real reason Andrew rarely comes home to visit. Joe is also (rightly) suspicious of Andrew and Margaret’s relationship, creating an even bigger wedge between father and son.

As Margaret and Andrew confront their own fears and vulnerabilities, they also begin to relate and respond to one another differently. The bickering shifts into something much more complex and emotional and it’s beautiful to watch their journey from beginning to end. Yes, there are plenty of cliched moments within the movie, complete with an airport chase scene, but Bullock and Reynolds manage to make The Proposal feel fresh and romantic all the same.