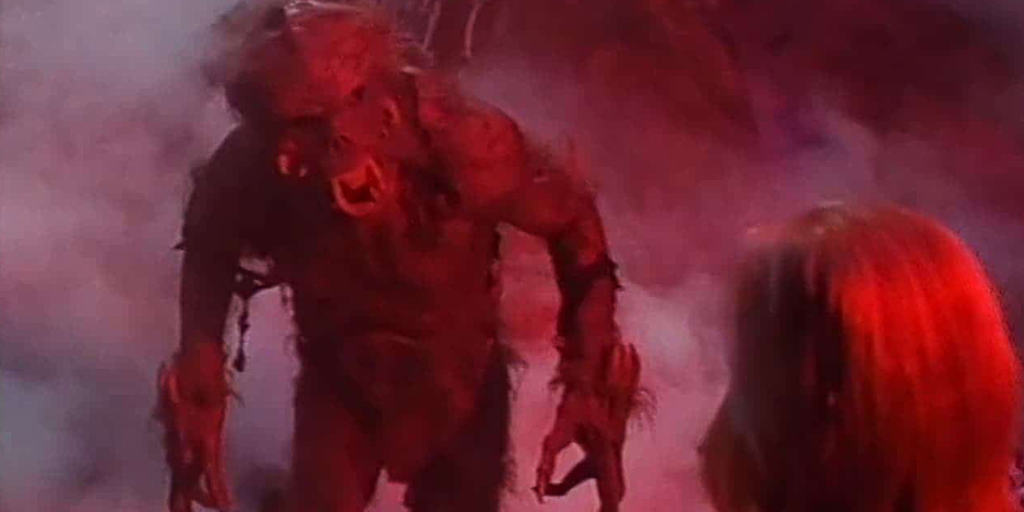 Everybody has their ‘comfort food’ movies. Those cinematic warm blankets you pop on when you want to watch something but you’re not in the mood to watch something new. It’s usually a childhood favorite or something that can only be enjoyed ironically and with a ton of booze. They’re the kinds of films you know by heart, so you can turn your brain off and just relish.

Cheesy hidden gems are my comfort food. There’s something fascinating to me about the movies time has forgotten and have been relegated to the dust bins of cinema. Uncovering an obscure gem that maybe 1000 people has seen, is comparable to Indiana Jones finding a long lost artifact or Lara Croft discovering a hidden city. It’s treasure hunting but the treasure is motion pictures and the hunting requires less fedoras and whips and more IMDb searches. Actually, it’s probably the same amount of fedoras. Nerds like fedoras.

Now, if you’ve ever read one of my reviews, you’d guess that this is the part of my patented preamble where I proclaim The Runestone as a lost treasure of cinema, ripe for rediscovery but–just like the best M. Night Shyamalan films– there’s a twist. The Runestone is a bad film. Sometimes films get lost for a reason and The Runestone is a perfect example of that.

But the what perplexes me is why? Why doesn’t this film work? It has a really unique premise, a pretty solid looking monster, a cast made up of terrific character actors and a script that is honest to god trying.

The only explanation I can come up with is the director. The most notable thing about director William Carroll is the fact that he has the largest private collection of L. Frank Baum and Oz related material in the world. That factoid is more impressive than his entire filmography and the only one that finds that factoid impressive is William Carroll.

The Runestone is his directorial debut and while not terribly directed it’s handicapped by a lack of vision. The only thing I kept thinking while watching this was how great it would be if Chuck Russell or Tom Holland directed this instead.

I’m going to give you the nuts and bolts of the premise and you tell me who you think would knock this thing out of the park: two archeologists discover an ancient runestone in western Pennsylvania and eventually realize that it contains the ancient norse beast Fenrir that if awoken will bring about Ragnarok.

It literally has the best elements of The Relic, The Wishmaster (it grants you your desires but that barely factors into the plot) and Rawhead Rex. While also creating its own unique mythology. The history scholars among you will know that before the Italians and before the Dutch, it was actually the Norse that discovered America first.

That’s an actual fact but this film presupposes that what if they came here just to get rid of something? What if they were trying to hide something on the other side of the world, where they never thought anyone would find it. What if the runestone was that thing. It’s an interesting concept and with a better director, it could’ve made for an instant cult or even mainstream hit but unfortunately, it isn’t.

But it’s not for a lack of trying. The cast is made up of “hey! I know that guy” actors such as the main detective in The Mask, Joe Cabot from Reservoir Dogs, Tootles from Hook, Doctor Finklestein from The Nightmare before Christmas and the main henchman from Die Hard that kinda looks like Thor is you squint a little bit. With the exception of Peter Riegert, nobody is given that much to do but they’re all good in the scenes they are in.

Besides the fantastic premise and the pretty decent looking monster, the real standout is Riegert. He plays the main detective (as if there’s any other role he plays) trying to solve the murders that Fenrir keeps committing. Based on the many character eccentricities (like his constant swearing, constant Pez eating and unexplained love for Godzilla) any other director would’ve cast a Bruce Campbell or maybe a Tom Atkins but I’m glad Carroll went with Riegert.

He’s a character actor that nobody ever thinks about but has an undeniable presence. Even if all you know him from is either The Mask or Animal House, he made an impression on you. I just wish the film was worthy of his talents.

In summation, the film isn’t great but has so much going for it, I kind of recommend it. Actually, no. No, I don’t. What I recommend instead is someone like Del Toro or Neil Marshall getting this script and creating a much better film because the bones are there.