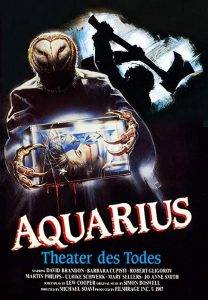 Plot: A group of stage actors lock themselves in the theater for a rehearsal of their upcoming musical production, unaware that an escaped psychopath has sneaked into the theater with them.

*THIS IS THE SECOND ANNUAL SHOWING OF STAGEFRIGHT. IN HONOR OF NATIONAL OWL DAY AND MY BIRTHDAY, WE SHOW THIS OWL THEMED HORROR MASTERPIECE. ENJOY.*