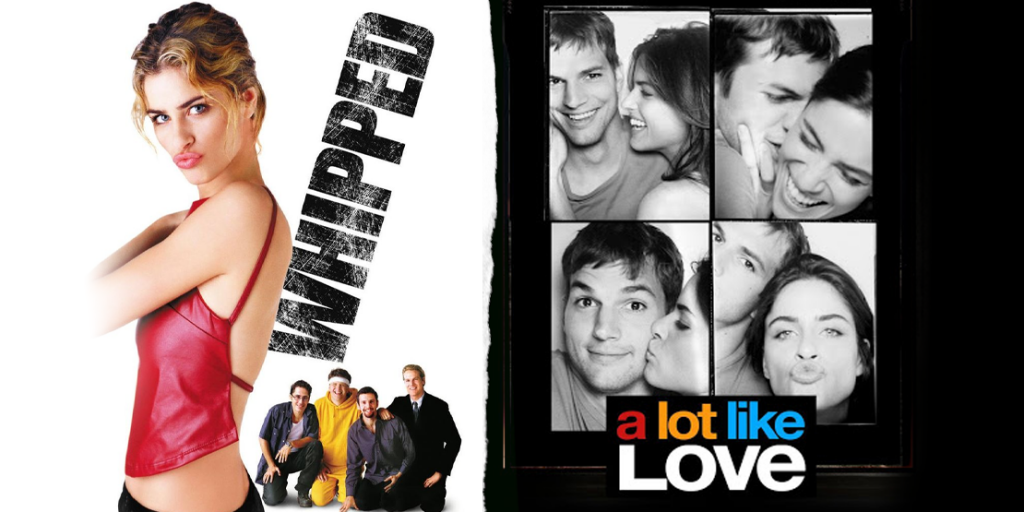 For most of her career, Peet has played character parts in a larger ensemble. As a leading lady, Peet chose to star in Whipped (2000) and A Lot Like Love (2005). Both films met with very middling financial success (making their budget back, but very little else) before largely disappearing. Whipped received 4 million dollars on a 3-million-dollar budget, while A Lot Like Love received 42 million dollars on a 30-million-dollar budget.

In both films, Peet plays the romantic interest of the male lead. However, Peet’s character in both films tends to be more complicated than just a simple girlfriend.

Whipped got made at the moment before Peet’s career blew up with her supporting role in The Whole Nine Yards. It came out after that film and got sold based on her newfound stardom.

The trailers and teasers present Peet as the breakout star that the movie centers around. Part of this comes from the fact that she was the biggest star in the movie. However, this strategy also sells a much different “battle of the sexes” type movie than it actually is. The film does not present a conclusion about such a conflict as it focuses more on male insecurities.

In reality, the film focuses on the three male leads and their married friend. Mia acts as a catalyst in the story for most of the movie. The film’s trailer also suggests a more of a wacky romp than the film’s actual approach.

Whipped plays into what was popular at the time. Characters talk documentary style to the camera, a narrative choice popularized by the growing fad of reality TV shows such as The Real World (1992-present). It has a character talking about doing the penis tuck from Silence of the Lambs (1991). All these choices make the film more topical than timeless.

Men and Women in the Story

From the get-go, the film portrays almost all of the guys as unlikable characters. The first time they hang out, the film presents the three of them hitting on unsuspecting women in the skeeviest way possible.

The film seems to not have a main character. The closest character to this is the sensitive Jonathan, who has the largest arc and the most sympathetic portrayal. He begins the film as a chronic masturbator who finds himself in awe of the guys. By the end of the film, he actually decides to leave their group because he has become disgusted with their behavior. However, they talk him back into their group.

Throughout the film, the film presents women as knowing the absurdity of the men in the film. Cohen often cuts to shots of unimpressed women getting hit on. In a scene where the Guys hit on three women in a park, they keep calling a woman “Crystal” instead of Bristol. When Bristol (Taryn Reif) says her name for the third time, the film cuts to a close-up of her.

Almost all of the actors in the film are friends of director Peter M. Cohen, who said he made the film for slightly more than the previous year’s low budget breakout The Blair Witch Project (1999).

In the audio commentary, Cohen describes the difficulties of making the film, from getting kicked out of multiple locations to having to shoot with limited coverage. Since this is actually shot on film, Cohen adopts a style of limited coverage, jump-cuts, and longer takes.

Along with that, the dialogue and sexual situations presented are often pretty graphic. Cohen had to work with the MPAA in order to get the film an R rating. One of the other big actresses in the movie (Callie Thorne) came to Cohen’s attention at the suggestion of Amanda Peet and appears as a woman who “tosses a man’s salad.” Another scene has Brad ordering pizza while a woman goes down on him. The MPAA made Cohen push in tighter on the shot so the audience would see less motion from the woman.

According to Cohen, he wanted Peet for the role because she was different from the many beautiful blonde fantasy women often portrayed in movies and television. Peet had grown tired of making independent films but said that she would do the movie if he could get it into Sundance. They did not, but Cohen did end up getting the movie released on 1200 theatrical screens.

Amanda Peet’s part of Mia is substantially different in the film. The film opens with her saying the line “everybody fucks everybody in the end. It’s the nature of the beast.” The film has her appear through the guys telling stories about her in a diner. Over the course of the film, Mia adapts herself to become each one of the guy’s perfect dream woman.

The film mostly sees her from the guy’s point of view until the last scene, where Peet reveals her true feelings about the guys to a group of women. In that scene, reveals manipulating all of them after seeing them hitting on women in a park one day. After this, the film cuts to one of the MTV style confessions where Peet talks to the camera and says that love is a game where people either play or get played. It plays like the end of The Usual Suspects (1995).

The only person that Mia seems to react positively out of the four guys is the sensitive Jonathan. She finds him harmless and loves the size of his penis compared to the other guys. 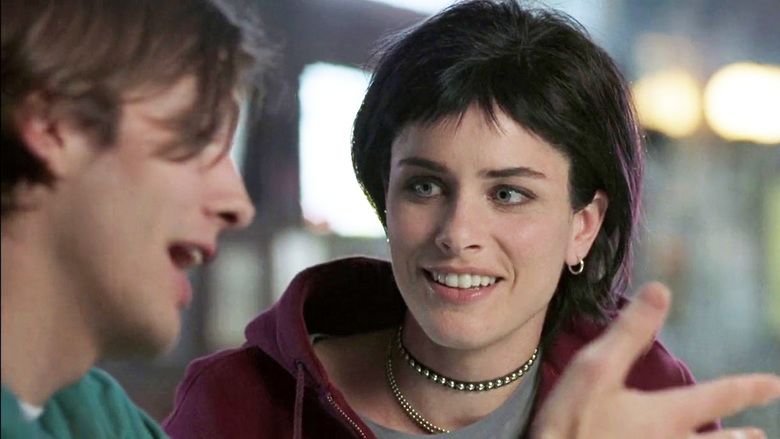 After meeting and having sex on a flight from Los Angeles to New York, Oliver (Ashton Kutcher) and Emily (Peet) spend the next seven years in an off-and-on relationship.

This is a film released by Touchstone Pictures, Disney’s more adult subdivision. The trailer tries to sell the film based on jokes and basically includes every big jokey scene from the movie. With a barrage of digital push-ins and pullouts, sped-up footage, and cartoonish sound effects, it often emphasizes jokes, even ones that are small.

A great example of this is a scene where Kutcher’s Oliver plays guitar for Emily under a fire escape full of the people. In the trailer, a guy loudly yells, “you suck.” In the movie, it is a barely audible line delivered by the film’s screenwriter that happens while most people clap for Oliver.

Besides this, the trailer does a pretty good job selling the more dramatic aspects of the movie, from the stakes of the story to the theme song by Aqualung.

The description on the back of the A Lot Like Love DVD begins with the phrase “In the spirit of When Harry Met Sally comes A Lot Like Love.” The marketing does not hide the fact that it has a similar plot to a more successful film.

The story roughly takes place from about 1998 to 2005. In the story, the more practical Oliver gets into the lucrative business of selling diapers over this new thing called the internet. Unfortunately, the business goes belly up. Now, in 2005, Oliver has to start all over again. This sets up the movie’s timeline and story arc.

Like most mainstream movies, A Lot Like Love’s cast and crew consists of popular actors from the time period, but in this case, each one is trying something new. British director Nigel Cole had become known for his hit comedy Calendar Girls (2003) and decided to make an American film.

Cole became attracted to Colin Patrick Lynch’s script because of its complexities. For one thing, it was not gendered about the behavior of the sexes (“women act like this, men act this”). A great example of this is that it’s Amanda Peet’s Emily who often wants to have sex in the movie. Another reason is that there is no big lie that keeps the characters apart. Instead, a whole bunch of small personal problems get in the way.

The same holds true for the cast. Ashton Kutcher had just left That ‘70s Show (1998-2006) to pursue a movie career. According to Cole, one of the hardest parts for Kutcher was accepting that it was okay not to try being funny in certain scenes. Like many of his other roles at the time, Kal Penn plays Kutcher’s best friend and business partner. However, he plays a more grounded version of the character this time.

As for Peet, this is the first time she really plays the romantic lead in a mainstream comedy movie. For most of her career, she played mostly character parts. In this role, she plays the co-lead of the story.

Unlike Kutcher’s Oliver, Amanda Peet’s Emily acts as the more troubled of the two characters. Oliver grounds her and introduces her to a passion that becomes her career: photography. While Oliver’s story is very topical, Amanda’s story seems more timeless.

Over the course of the story, Emily changes the most. At the beginning of the story, Emily has just broken up with her musician boyfriend (Norman Reedus in an uncredited cameo appearance) and decides to have sex with Oliver in an airplane bathroom. She then decides to reject him based on a nitpicky three strikes policy (which includes rejecting him based on being born under the wrong star sign). Early on, the film sets up that Emily’s mother has died and that her father (James Read) has remarried. She ditches her father and stepmother (Molly Cheek) to hang out with Oliver.

Throughout this story, Emily has the most boyfriends. This includes the musician, screenwriter Peter (Gabriel Mann), and Ben (Jeremy Sisto). In a deleted scene, Emily asks Oliver what type of girl she is. Oliver says that she is the type of girl who always needs to have a boyfriend.

At the end of the story, Emily finally convinces herself that Oliver is the one. She now has to run and stop his wedding. She gets there, only to learn that it is actually his little sister (Taryn Manning) who is getting married.

In both trailers, the advertisers try to sell a different movie than the one Peet appeared in.  Each film presents Peet playing an edgier role than the trailer presented. These would be the films that got most prominently sold based on Peet appearing in the roles.

Aside from Peet, another famous actress plays a very small role in both films. Whipped features Bridget Moynahan as a woman the guys hit on. Moynahan would later go on to better-known roles in movies like I, Robot (2004), and TV shows like Blue Bloods (2010-present). In A Lot Like Love, Meghan Markle sits down next to Ashton Kutcher on a plane. She tries to talk to him, but Kutcher acts oblivious as he is thinking about Peet’s character. While the film sold Peet, nobody expected for either of the actresses to become known the way they did.