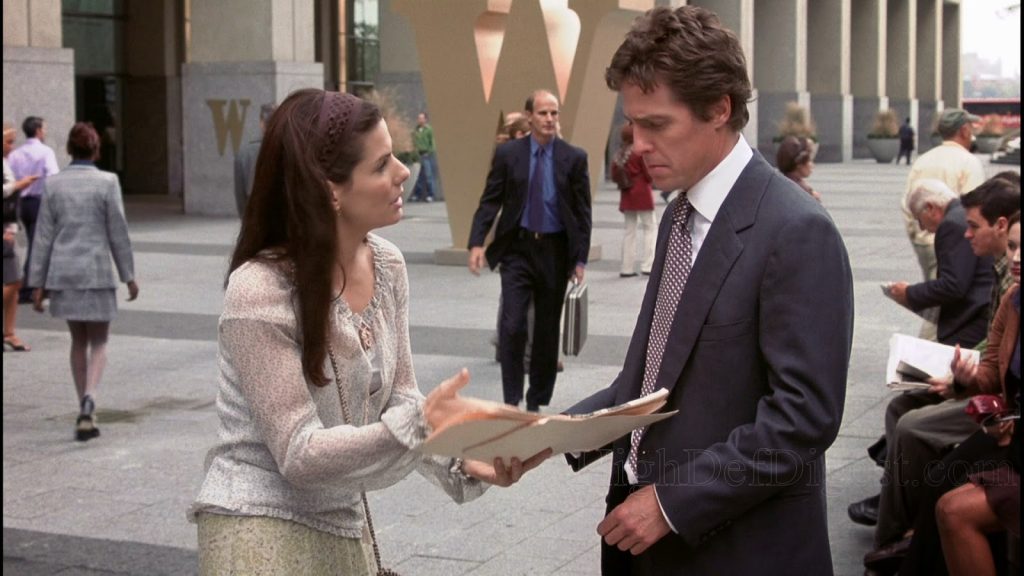 Lucy Kelson (Sandra Bullock) is an eco-friendly, idealistic lawyer who is heavily involved in social activism. She frequently protests the demolition of older buildings in New York City, and her latest cause is the Coney Island Community Center, where handsome billionaire George Wade (Hugh Grant) plans to build high-end condos. When she confronts him about saving the community center, Wade is impressed by her and offers her a job as in house counsel of the Wade Corporation. It seems he has gone through quite a long list of them, having only hired beautiful, but not exactly qualified, candidates of whom are eventually fired by his brother, who owns the company. But Lucy is qualified and George promises that they will keep the community center if she takes the job. Lucy is reluctant at first but realizes how much good she can do for the community with the resources at her disposal.

Over the course of the next year, Lucy finds herself becoming George’s decision-maker and confidante, always at his beck and call at any hour of the day, or night. George has lost all sense of boundaries, assuming he ever had any, and he has come to depend solely on Lucy for everything from what kind of envelopes to use for his correspondence, to what color tie he should wear for a television appearance. This is understandably frustrating for Lucy who feels as though she’s not living up to her potential. When George’s superficial “emergency” pulls Lucy out of her best friend’s wedding, Lucy decides she’s finally had enough and gives George her two weeks’ notice. She promises to stay on to find his replacement, but then she’ll be moving on to something new.

Two Weeks Notice tells a story that has been told a thousand times over. An opposites-attract love story that finds the intelligent, serious heroine falling for the wealthy, shallow man-child and vice versa. She needs to learn to let loose and enjoy life, he needs to learn to grow up and be the man she knows he can be. I’m not sure how well the movie would work without the talents of Bullock and Grant. The beginning of Lucy and George’s work relationship feels rushed. She gets hired and then we skip ahead in time from two weeks later to six months in order to show the evolution of how deeply George has come to depend on Lucy, much to her obvious exasperation. The movie is called Two Weeks Notice, so yes the majority of the movie takes place in those two weeks before Lucy is to hand over the reins to her replacement June (Alicia Witt). Lucy feels some apprehension, given June is young and beautiful, and quite obviously interested in George on a level that’s not entirely professional. This seems to spark Lucy’s realization that maybe she has deeper feelings for George as well.

Excluding June, the supporting players feel a bit underused. David Haig is delightful as George’s older brother, Howard, but Heather Burns and Dorian Missick feel like the cardboard cutouts of the two leads best friends, only there to occasionally drop a joke or a quick piece of advice. I also wanted to see more of the fantastic Dana Ivey and Robert Klein as Lucy’s parents.

Two Weeks Notice is predictable fluff, but Grant and Bullock deliver enough humor and chemistry to make it worthwhile predictable fluff. I’m a sucker for the grand gesture scene, and Two Weeks Notice has one of my favorites. Ultimately though, I can’t help but feel like with a slightly better script, this could have been a great romantic comedy instead of just a good one.